​NBA 2K is still in a rebuilding phase. While it has shown some flash on the court and tantalized with RPG systems in MyCareer, it has a long way to go to reach the championship form we celebrated years ago. Last year's game was a step in the right direction that laid the foundation for a promising future with a more dynamic defensive game, better perimeter play for smaller players, and great depth found in The City and MyTeam. It'll be interesting to see if Visual Concepts can build off of these gains in NBA 2K23 and continue to innovate on the court, and find ways to better integrate the WNBA into its modes. As always, making VC less intrusive is a necessity.

We still don't have insight into any of this year's modes – other than the Jordan Challenge returning with 15 flashback moments from Michael Jordan's career – but we do know what to expect from gameplay. Visual Concepts uses the word "authenticity" to sum up this year's changes, which appear to apply a high level of realism to little interactions between players and how the ball is handled. Here are the key additions and changes you can expect to see on the court when NBA 2K23 launches on September 9:

Easier Play
Visual Concepts knows NBA 2K is a difficult game for newcomers to find success in. To make the onboarding less stressful, the rookie difficulty level is much easier in NBA 2K23, and should allow new players to jump right in, hit shots, and win games as they get acclimated with the deep gameplay systems.

Hang on the Rim
Metered skill dunks are back, and you can now use the Pro Stick to determine which slam is performed by flicking in a direction. If you flick up, you'll perform a two-hand dunk. If you flick down to up, you'll execute a flashy one-hand dunk. You can also hold the stick to perform a rim dunk, meaning your player will hang on. If you press up on the right stick, your player will pull up on the rim in a show of strength. You can also move the left stick in different directions to make your player swing. If you hang on the rim for too long, you'll get a technical foul. We don't yet know if a player can bring the entire backboard down like Shaquille O'Neal. Visual Concepts says the rim-hanging technology has been in development for a couple of years and is for the new-gen version of the game.

Shooting is a Weapon
This is how Visual Concepts is viewing perimeter play in NBA 2K23. Each jump shot type delivers different stats that determine the shot speed, release height, defensive immunity (how effective it is against defensive contests), and timing impact. The latter changes the shot window based on the player's timing of the shot (good or bad). Visual Concepts is also doubling the number of shot animations to bring about more realism and instill more variety into the offensive game. Players have five different shot meters to choose from, and you can determine if they are above the player's head, to their side, or below them. In a strange twist, you can unlock another 15 shot meters through Season play. Shot feedback is different this year, delaying the green flash of success until the ball hits the rim. This creates more drama and should keep players around the hoop until the play finishes, rather than retreating to defense when they know the ball is going in upon its release.

Killing Stalls with Adrenaline
Some players stall in play and run out the shot clock by aimlessly dribbling on the offensive end. A new adrenaline meter should stop this from happening. Each player has three adrenaline boosts under the stamina meter. The more they move and use specific motions like sprints, the faster the adrenaline depletes. If the adrenaline is gone, there's a good chance the defense will get the best of them, which should encourage passing and shooting.

Defensive Play
Visual Concepts' movement team spent significant time reworking the footing of defenders to reduce the sliding effect and improve the realism of planting and sticking with the ball handler. For one-on-one matchups, you'll notice three new little meters under the ball handler that represent the defender's position. If the defender is right in front of the player, they occupy the center meter. If they shade to the right, they are in the left one. If the ball handler tries to attack the occupied zone, they'll either be cut off, lose the ball, or grab it and have to pass or shoot. It sounds like there's some luck involved in this system, but Visual Concepts says there's enough time to react to player movements. When a shot is taken, swatting it out of the air is not as easy as last year. Visual Concepts dialed back the blocking, yet has added fly-by blocks to get a hand up for perimeter shots.

Improved A.I.
Visual Concepts says it would take two hours to break down all of the changes to this year's A.I. opponents. In short, they attack more intelligently, execute the pick-and-roll better, and run dynamic game plans. Star players also have their own dynamic A.I. system to mimic their real-life counterparts. Each star can have up to four A.I.-specific moves.

Badges Sound More Confusing But Better?
Badges for created players are back. In last year's game, Visual Concepts noticed that players were becoming a little too overpowered by stacking the same badges. To ensure this doesn't happen again, the badges are now broken up into tiers. There are eight badges in the first tier, four in the second, and another four in the third. Tier one badges are the least impactful (yet still helpful). The cost goes up to use the other tiers. As Visual Concepts puts it, you'll need to use tier one badges before you can use tier two and three. The hope is this system brings more variety to the badge load-outs and pushes the player to be more strategic. As for the Team Takeover ability, in this year's game, the entire team doesn't immediately catch fire. Each player must now fill their own portion of the meter by performing on the court before Team Takeover takes hold. It's another way that NBA 2K23 strives to bring out the authenticity of the sport. 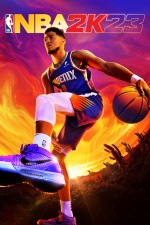