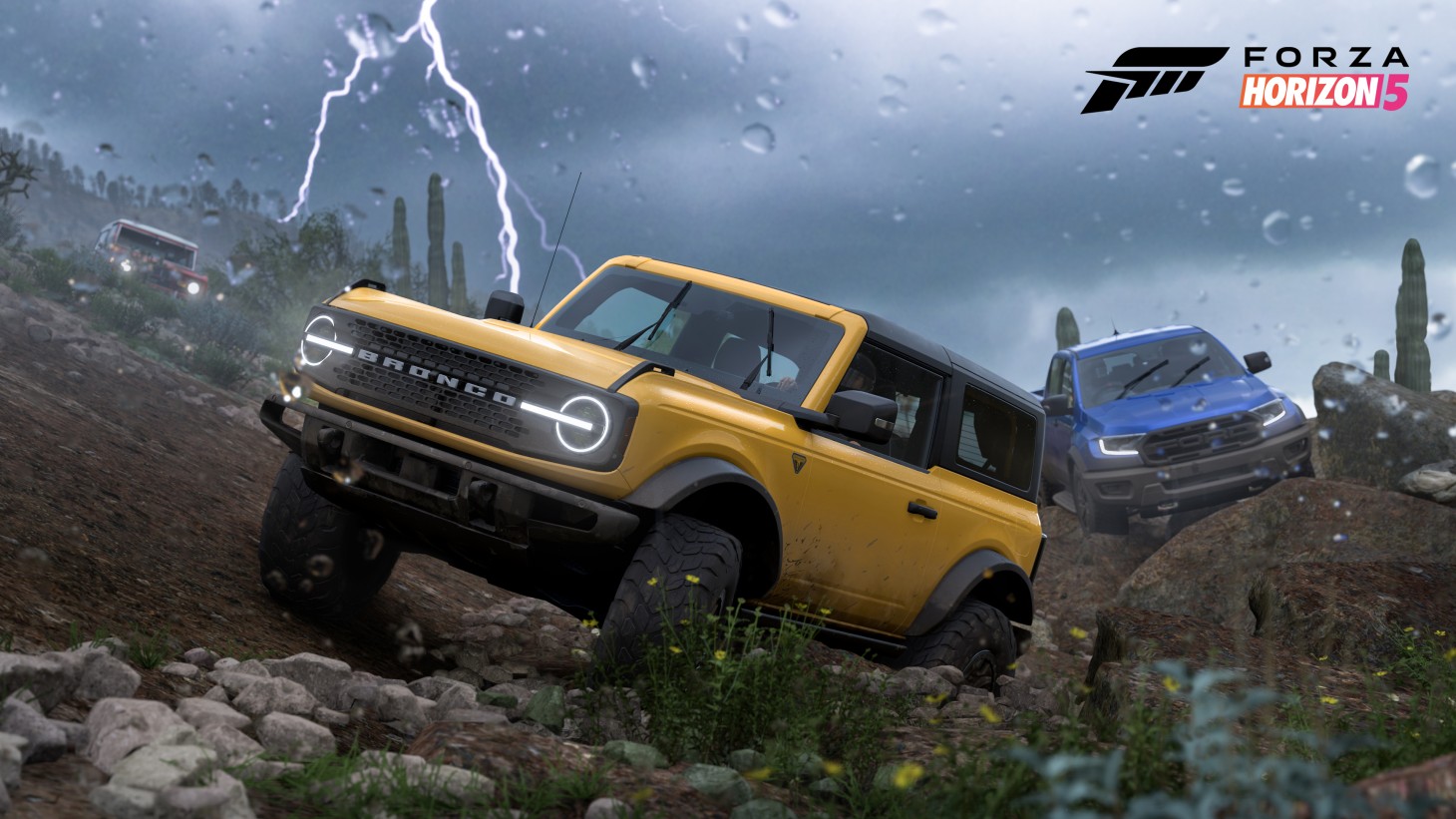 Forza Horizon’s penchant for bar-raising graphics and intricate but accessible driving controls have been amplified by next-gen technology. The latest gameplay footage that premiered during the Xbox Gamescom Stream demonstrated this with ease. Mexico’s biomes in Horizon 5 teem with lush shrubbery, arid flatlands, sparkling seas, and sleepy villages/bustling cities. As always, where you travel and who you bring along for the ride are up to you. This time around, however, the explorable environment is more alive than ever before.

What’s a Forza game without the constant promise of adrenaline-pumping spectacle? Is it any surprise that the opening seconds of Horizon 5 showcase a 2021 Ford Bronco Badlands (my dream car, by the way!) literally skydiving then parachuting onto the bumpy slopes of an active volcano? While the offroad SUV deftly maneuvers past eroding rock formations and sharp gravel, you can spot a sea of storm clouds enveloping the landscape in every direction; the Gran Caldera is the highest navigable spot in the entirety of Playground Games’ open-world racing franchise, after all. The Bronco begins its dangerous descent towards the Baja Desert, fissures brimming with inlets of steaming lava and raindrops lightly pattering against the vehicle’s broad windshield. Don’t be fooled by the heat. Creative director Mike Brown asserts that this is Mexico’s winter season, and, on cue, the molten earth gives way to thick layers of snow and sleet.

Forza Horizon 5 is a transitional game that bridges the gap between the two titles before it and showcases a brilliant new vision of the developer’s immense ambitions. Moreover, this is the first installment specifically designed to utilize the power of the Xbox Series X/S. In one moment, the 2020 Corvette Stingray carves a speedy path through the Mexican farmlands as an encroaching duststorm threatens to paint the field of view rust-orange. Suddenly, the Porsche 911 Desert Flyer speeds through a dense jungle towards an ancient temple. Finally, a Mercedes AMG One confidently coasts down the pavement streets of small settlements, palm trees swaying in the breeze. As always, there’s much to see, but there’s even more to do.

The Horizon series may not be known for its campaign, but 5 ups the ante with hundreds of challenges and miscellaneous activities like the multiplayer-focused Horizon Arcade and the EventLab, which provides complex toolsets to create/share custom races, challenges, stunts, and more. Yet, the most interesting mechanic allows players to choose the outcomes of story missions. How this is implemented and what this means for the dynamic world remains to be seen. Forza fans are guaranteed a bevy of content, and with weekly seasons returning, Mexico’s look and feel will shift frequently. But what about the depiction of the customs that make the country so unique? When asked about how Playground Games avoided cultural clichés and typecasts during an earlier showing of this same Gamescom trailer, Mike Brown concluded the preview event by emphasizing the team’s boots-on-the-ground research and collaboration with Mexican citizens – from popular music artists to humble tour guides:

“This is something that we’ve absolutely taken very seriously. We’ve had teams in Mexico – at least, where COVID allowed us, and we were really lucky to make a lot of contacts during those trips. Even if members of our team weren’t able to travel back there, we had people on the ground who were photographers and tour guides that we could contact and say, ‘hey, we’d really like to get more reference on a given thing’ and then they could grab the photographs or videos or whatever it was that we needed. We had an audio team out there quite recently, capturing ambient audio so that each biome has its own suite to recreate the feel of being in those places. And we’ve worked with Mexican scriptwriters and cultural consultants to ensure that we’re not playing off any stereotypes. We want this to be a game that feels like it’s been made with care and love, something truly authentic.”

Forza Horizon 5 drops on November 9 for Xbox Series X/S, Xbox One, and PC. 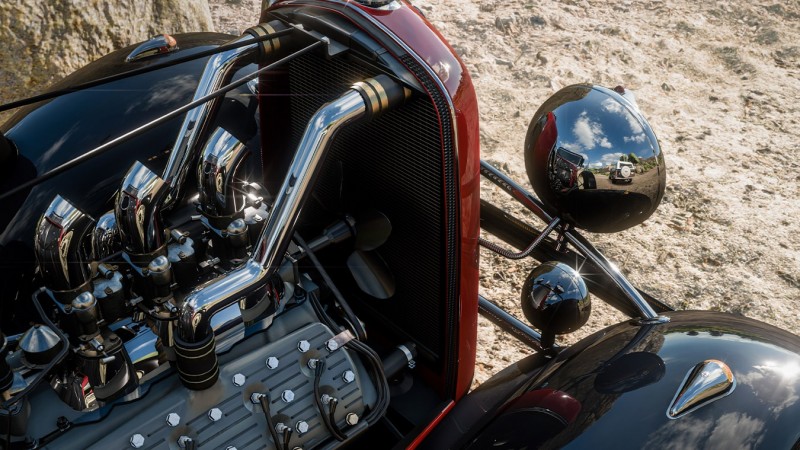 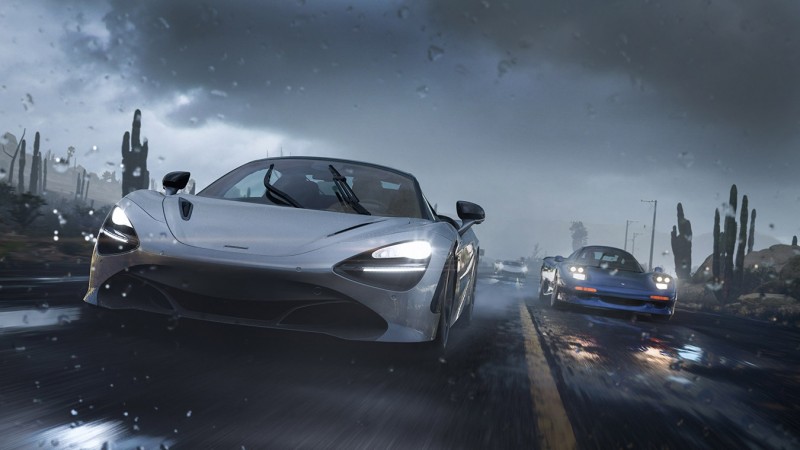 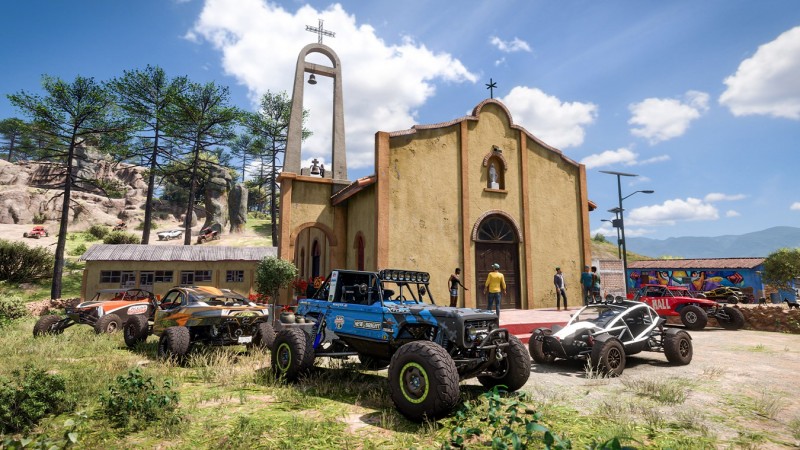 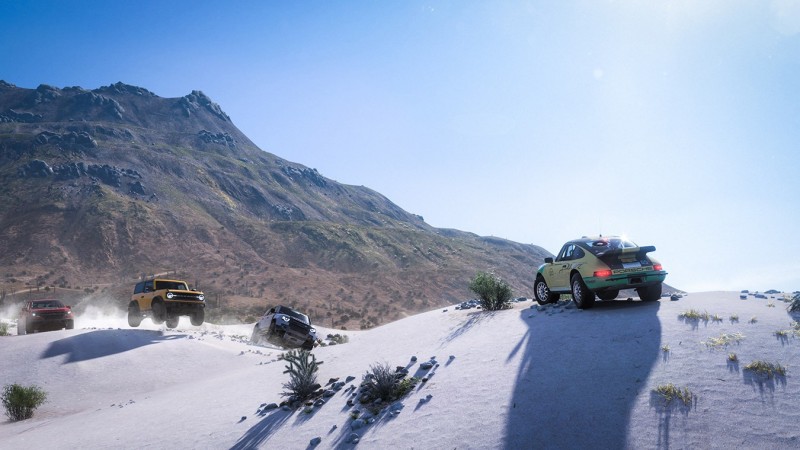 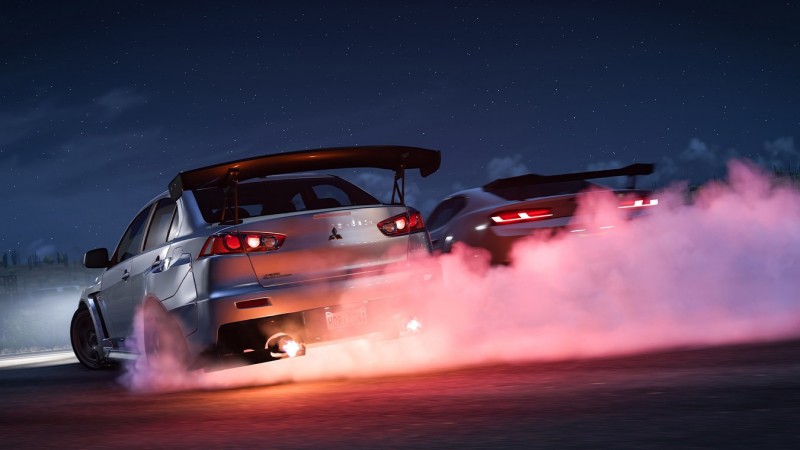 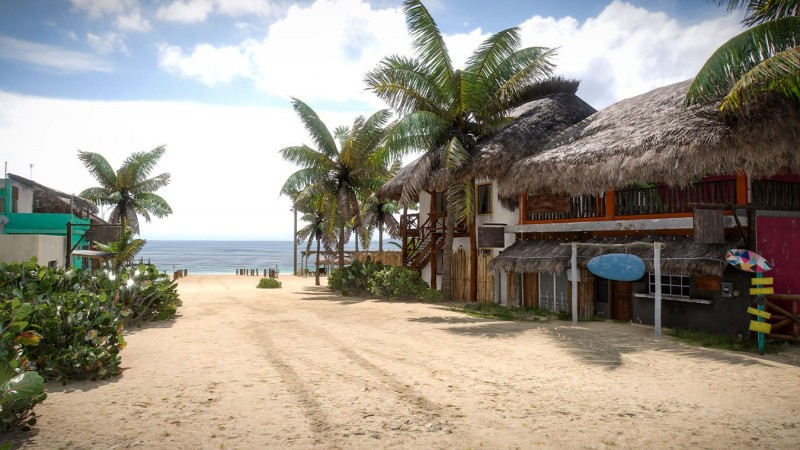 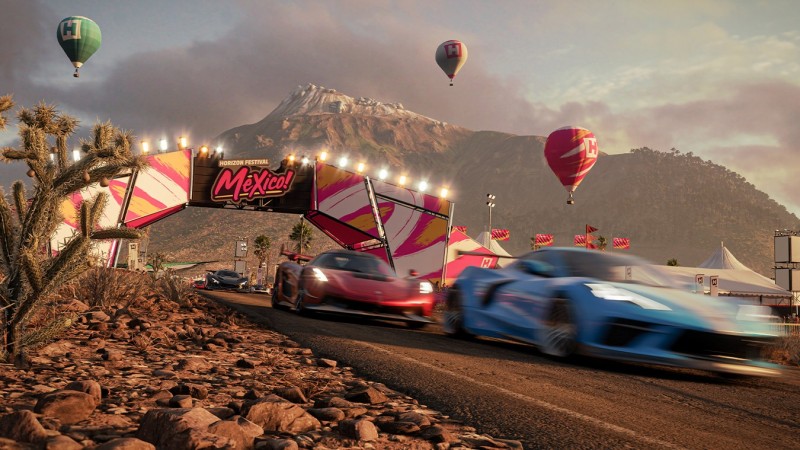 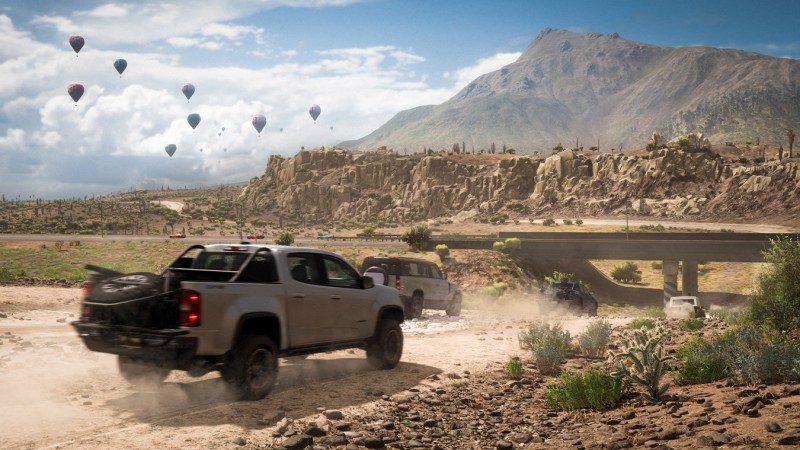 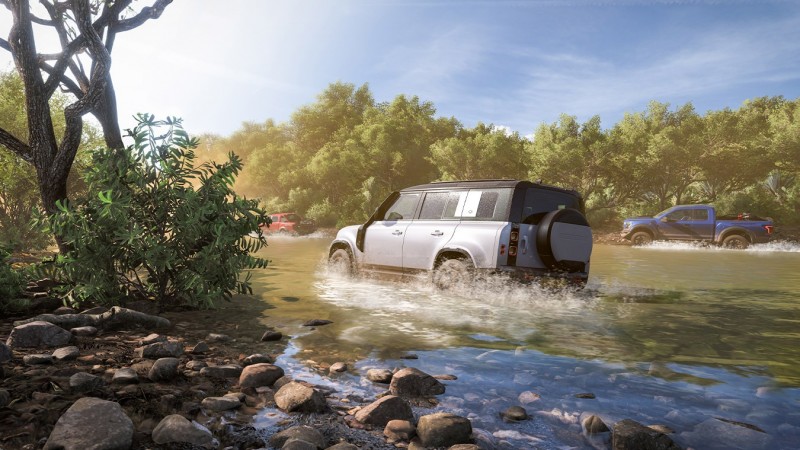 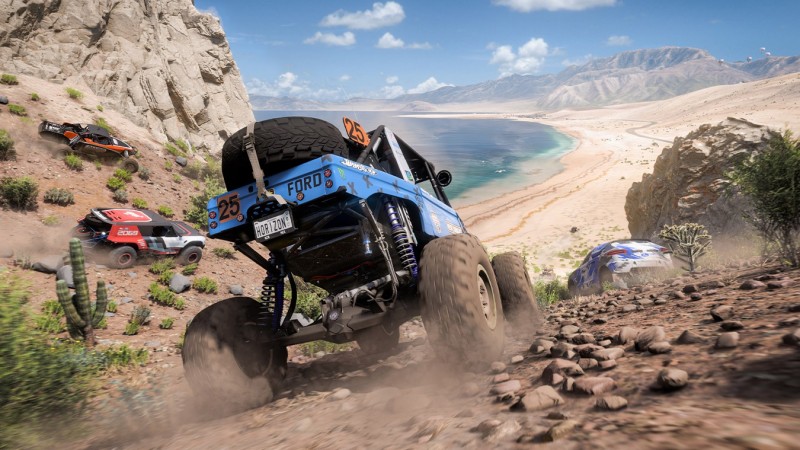 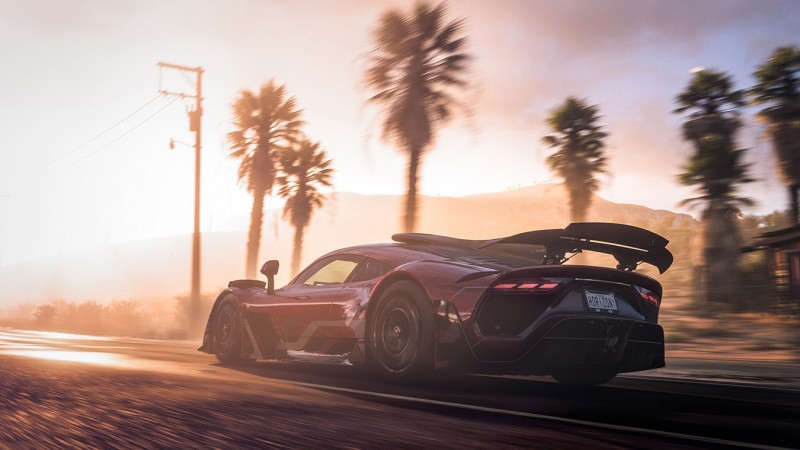 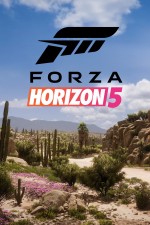