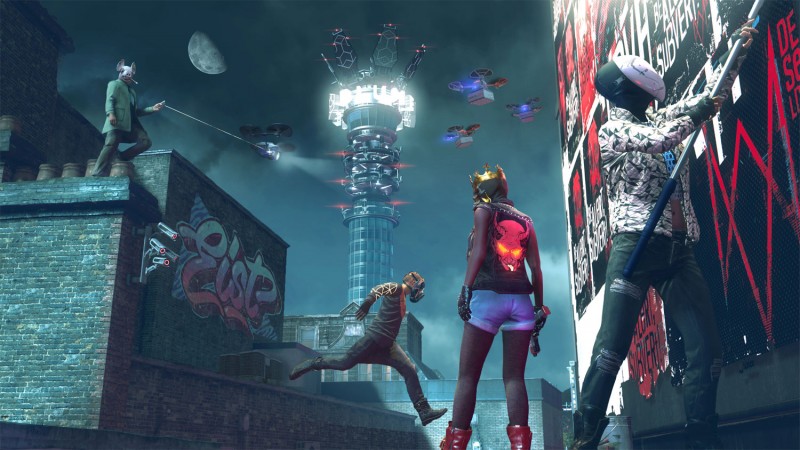 If the idea of jumping into London with a few of your mates sounds appealing, well, you’re not alone. That’s exactly what you’ll be able to do with Watch Dogs: Legion’s multiplayer. Up to four players can join up online to take on missions or enjoy the kind of freeform mayhem that often comes with these kinds of systemic open-world games. While everyone will be playing within the city of London and all that entails, it’s a slightly different version from the single-player campaign.

“The online for Legion, we built a dedicated online sandbox, so it’s a completely different world,” says Lathieeshe Thillainathan, live producer on Watch Dogs: Legion. “We’re taking all of London and putting it into an online sandbox, and we built dedicated online content. So, we built the co-op missions and the tactical ops and everything else – those are all built for online. And then you have your own team that you build in online as well. It’s a complete, separate, piece of content to the single-player campaign.”

In other words, when you start the game, you choose whether you’re playing the campaign or diving into multiplayer. These are discrete experiences from one another, with each one having its own missions, rewards, and even your team composition. Recruiting has been streamlined from the way you get new operatives in single-player; instead of engaging with special recruiting missions or using the deep-profiler system to lure people over to DedSec, recruiting in multiplayer is more like a shopping experience. You see someone that you want on your team, and you can hire them using the influence you earn by playing missions.

“The entire simulation is brought over to the online world, so people still live in the world, they still have jobs, they’ll still react all same way, we just made it faster for you to recruit because you don’t want to be sitting around and waiting for your friends to show up to play,” Thillainathan says.
Since these two modes aren’t connected, I wanted to know where in the story continuity the multilayer sandbox took place – if at all. Thillainathan’s response was a little cryptic. “I don’t want to spoil too much, but it takes place in parallel in some ways to the main campaign. But we’ll talk more and more about it when we get closer to the holiday.”

All right. Once you’re matched up and have a few operatives recruited, what kinds of things can you and your friends do? “You have assignments, which you can do by yourself, then you have co-op missions that require two players that have custom-built co-op ingredients that you can play with,” Thillainathan says. “And tactical ops are the top tier of that experience.” Tactical ops are designed to reward players who coordinate their approach, such as having one member of the group hack into cameras to monitor a situation while another hacks the target. Meanwhile, the others might have to protect the rest of the crew. “We build a lot of exotic, specific, co-op elements that get all four players to highly coordinate,” he adds. “But we’ve also kept the challenge not so difficult that only the top one percent of players will ever try to get there or play. We wanted the experience to be challenging, so you can play it right off the bat once you finish the on-boarding, but if you don’t have a full stack of your operatives and your gadgets, it might be quite challenging for you. But that alone might be fun for some players to just go in there right after on-boarding and try to beat it.”

It’s not all co-op, however. Players who want to take out their fellow players can do so, in a way. At launch, players can participate in spiderbot battles, which are BattleBot-style combat arenas. “The spiderbot was one of those really cool gadgets the team built as part of the full game experience, and we fell in love with it,” Thillainathan says. “What cool thing could we do with this little gadget? We custom built a game mode where you can customize a spiderbot in that match – you have multiple maps – and within that match itself you have weapon pick-ups.” There aren’t long-term upgrades; this is more of a “drop-in, kill some bots, and drop out” kind of mode. Still, there will be leaderboards, and the team plans to add additional weapons and maps after Legion launches.

Watch Dogs: Legion is coming to PlayStation 5, Xbox Series X/S, PlayStation 4, Xbox One, Stadia, and PC. Check out our new video to see more of the game in action.