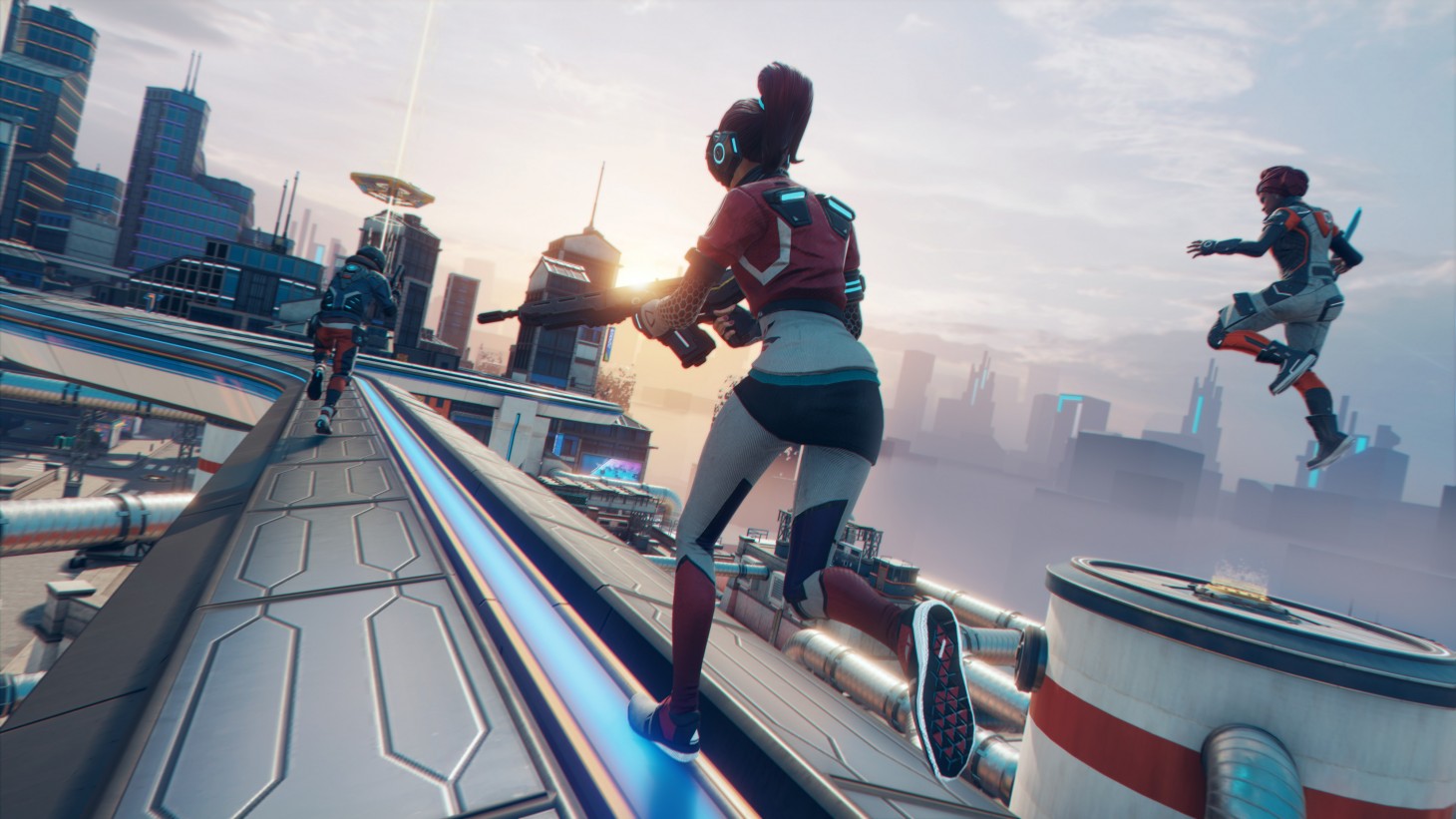 The battle royale arena always has new contenders entering, taking shots at the big players in the genre. Today, Ubisoft showed off its latest first-person foray into the battle royale ring, Hyper Scape. With 100 players, three-person squads, and some mechanics that change things up for longtime fans of the "where we dropping?" genre, Ubisoft is betting heavily on another element to power its boisterous bash: the viewers. Tapping into the world of streaming integration, Hyper Scape allows viewers to engage with the players in important ways, like voting on in-game events to change the shape of the game. Hyper Scape is free-to-play and coming to Xbox One, PlayStation 4, and PC. 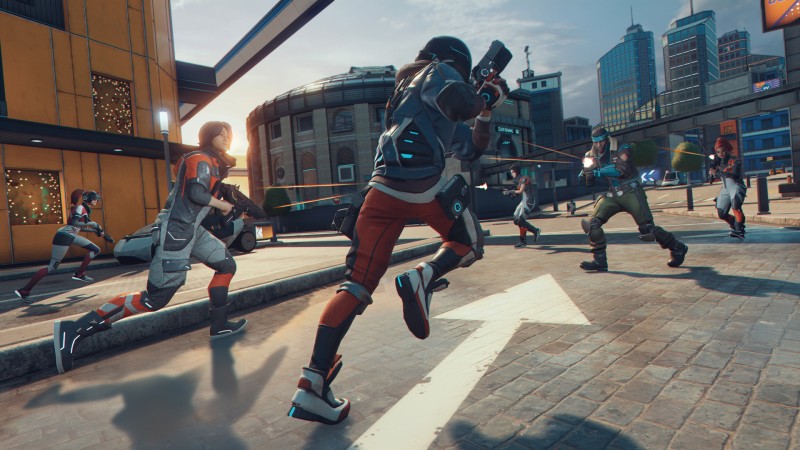 The game begins in a familiar fashion. In a waiting room, players wander around and size each other up as the player count ticks up. Then, it's drop time! Pods fly down from the sky (no fall damage) and allow you to pick and prioritize your landing zone. The major landmarks contain significantly more loot than the smaller ones, but as is the standard, you'll probably have to blast your way out of an early conflict to walk away with the gear.

Gear in Hyper Scape works a bit differently than other battle royales. Your weapons and abilities have different tiers that can be upgraded by collecting multiple copies, making those extra guns a boon when you find them. So if you have a shotgun and find another shotgun, it might upgrade the magazine size, and the next copy might upgrade the damage. Upgrade enough times, and you max out a weapon or ability, turning it golden. If you're really lucky, you can find golden items out in the wild without having to do any upgrading at all. If you're looking to score some fully-upgraded loot right away, the hot spots often contain them.

Hyper Scape keeps it simple with two weapons and two abilities. That's your kit. Some of the abilities are familiar fare – healing, teleporting, invisibility – but I had a ton of fun with the bouncy ball. Yes, one of the skills you can pick up is an armored ball that you can bounce around in to giant heights, and then jump out of your ball midair and let loose a salvo at the enemy. The ball is a great way to dive into combat or escape a dangerous encounter, plus it looks really cool and plays up the game's vertical focus.

One mechanic that battle royales are tackling today is how to handle death. What happens if your teammate dies? Well, in Hyper Scape you can bring them back with a little effort, but the journey to make that happen is the most interesting angle. When a player dies in a squad scenario, they become a ghost. They're still in the game, but they can't interact with anything, meaning they still have sight and can feed you information regarding enemy movements with zero risks. If you defeat an enemy, a beacon appears where they've been slain, and your fallen teammate can head to this beacon and sit on it. At the beacon, you can revive your dead ally. They come back without their loot, but ready to get back in the action. This means theoretically a player could come back in a match many times, assuming they have savvy teammates willing to take risks and communicate to bring them back.

As with other battle royales, the field of play whittles down as areas of the cityscape collapse in stylish fashion over the course of a game, which feels less like a strict circle closing in and more about closing off the field chunk by chunk. With all the death involved in a final-zone scenario, you may be wondering how things get resolved when teams can potentially bring their allies back to life many times. That's where the crown comes in. In the late game, when players are corralled into the final district, a crown will spawn. If a player on your team can hold the crown for a short period of time, you win and the game is over. Of course, you are highlighted on the map while holding the hot potato, so everyone remaining is gunning for you. If you go down holding the crown, someone else can grab it, and the action continues until one team is left or a player holds the crown long enough. 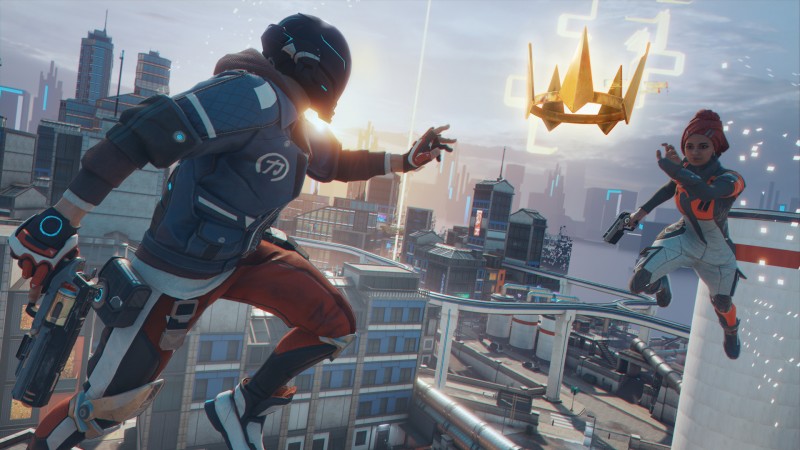 It's 2020 and visibility and watchability are key factors for some games. Hyper Scape is one of those titles. With a robust Twitch extension, viewers can alter the game state in real-time by voting on alterations. Want to see some low-gravity action? Vote! Unlimited ammo? Vote! Health for everyone? Vote it up! As a viewer, you can have a direct impact on the game by slinging votes and then watching how your favorite players and teams handle the new rules. There are other ways that viewers can interact with Hyper Scape and streamers, like integration that allows you to play with your favorite streamer without any laborious friend invites; it's all handled by the extension. It's stream-centered gameplay from the ground up, so we'll see if Ubisoft's bid to win the viewers via integration pays off.

You can score an invite to Hyper Scape right now via drops by watching your favorite streamers, with more information on a wide release coming in the future.