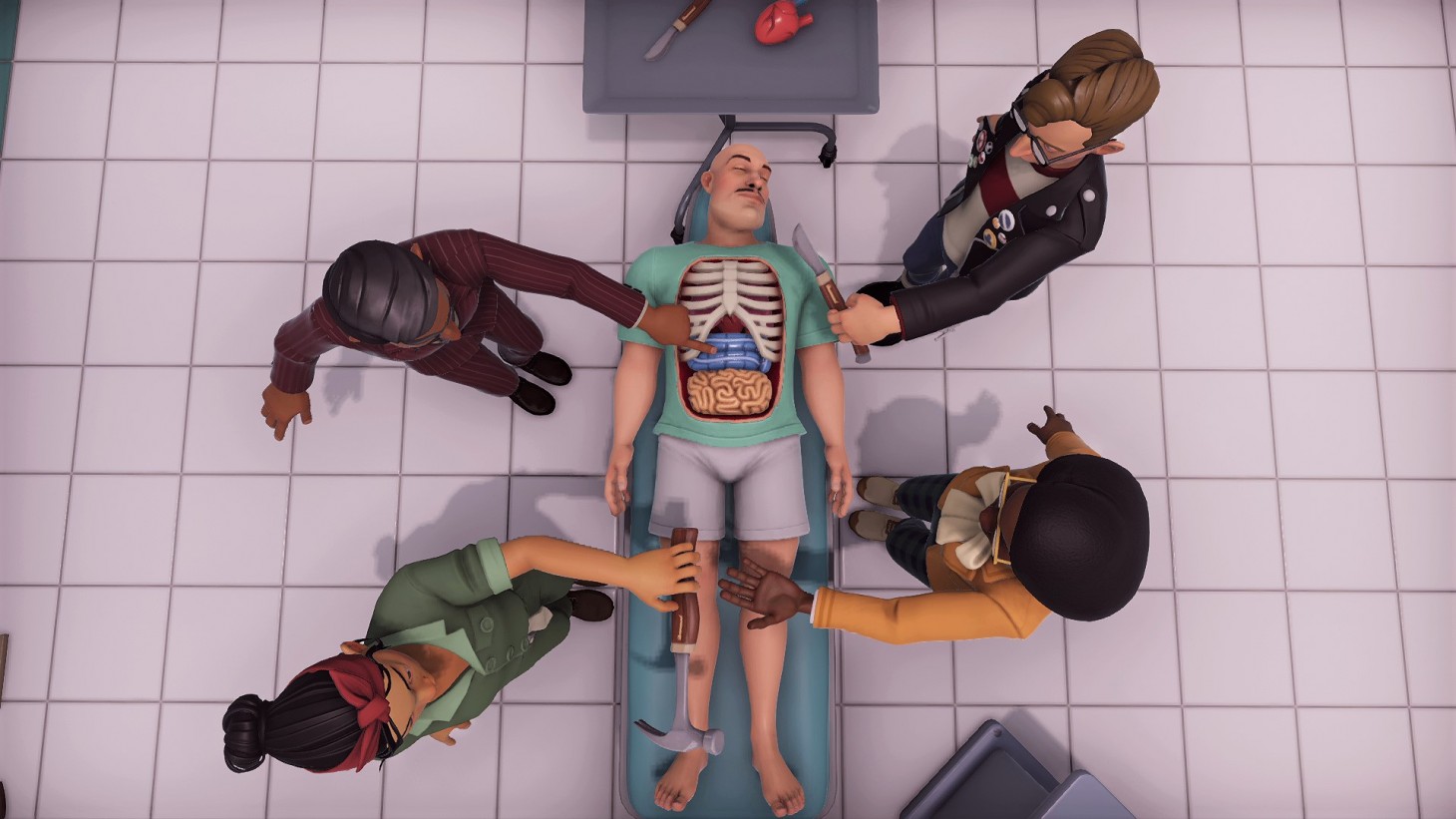 The original Surgeon Simulator was a pioneer in the clumsy sim space – a genre that tasks players with completing somewhat mundane or routine tasks while contending with intentionally awkward control schemes. In Surgeon Simulator, players manipulated a surgeon's arm through several increasingly risky medical procedures. Thanks to its cumbersome interface, players were often as likely to cut off a patient’s limb as they were to perform a flawless procedure. However, a dash of chaotic physics and cartoonish visuals lent Surgeon Simulator's life-threatening antics a sense of carefree glee.

“In the first game, you were locked into what we call diorama scale,” says senior game designer Nate Gallardo. “This time, the game is expanded in every single direction. So you have a fully-featured first-person character to control. You can run around. You can crouch. You can jump. And you have an even wider range of motions with the hand. We have a gesture system, so you can scroll through different gestures and communicate non-verbally. It's great for self-expression. In fact, we get a lot of people who just start dancing. We often get distracted by dancing ourselves. While testing levels, we often end up creating new dance moves."

As in the first game, players still complete a variety of surgical procedure, such as amputating limbs or transplanting hearts. However, in Surgeon Simulator 2 players also have to solve environmental puzzles and navigate simple environmental barriers before they even enter the O.R. During one opening level, I explored a maze of hospital corridors in search of a keycard to unlock the operating room. Surgeon Simulator's controls are a bit awkward, and it took me a few minutes to complete simple tasks, such as picking up a syringe and injecting my patient. Still, I couldn't help but laugh as I fumbled with my tools and knocked over a nearby rack of medical equipment.

In another level, I was tasked with replacing a patient’s gangrenous leg, but to get a new leg, I first had to find a fuse that unlock an electric door. Then I had to bring the old leg through a winding hallway and deposit it on a scale. Fresh legs are dispensed through vending machine-like contraptions. However, my patient’s new leg dropped onto a conveyor belt behind a glass enclosure, so my final task was to power on the conveyor belt.

While I contended with all of these ridiculous tasks, my patient was slowing bleeding out, which ratcheted up the tension. Fortunately, you can also find syringes full of extra blood or other chemicals that help stop the bleeding, which buys you more time. If your patient remains stable, attaching a new limb is as easy as pressing it against your patient, but if you're feeling cheeky, you can swap your patients legs and arms. Not only does this look absurd, Surgeon Simulator 2 actually considers this a successfully completed surgery, which is just one of the ways that Bossa wants to encourage players to have a good time.

“Humor is something that we spoke about a lot early on,” says Gallardo. “I'm personally not super keen on being delivered the jokes unless it's a game that's very good at that. Something I really enjoy is when I'm given the opportunity to create my own humor, whether that's on my own or with friends. Having that social situation where things go wrong is funny, but when things go right in an unexpected way is also funny. For me, that’s the richest vein of humor you can mine. We didn't want to force a bunch of gags that only work once on the player. For the most part, we want to set up situations where the humor and the comedic element is emergent, or the players bring it themselves."

When you and your friends are done with Bossa’s set of pre-made story missions, you can work together to design your own levels in Creation Mode. Bossa says its already seen a wild assortment of creative levels that range from two-player time attacks to team-based basketball games to dioramas based on Alice in Wonderland. Once you’ve completed your masterpiece, you can upload it onto Bossa’s hosting service where you can also rate and review other fan-made content. If all this content is as creative as it sounds, hapless medical professionals should have an endless stream of surgeries to perform when Surgeon Simulator 2 releases in August. 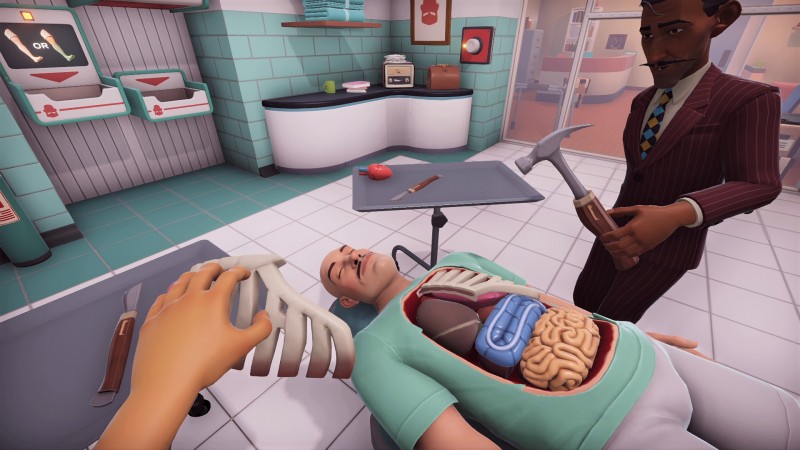 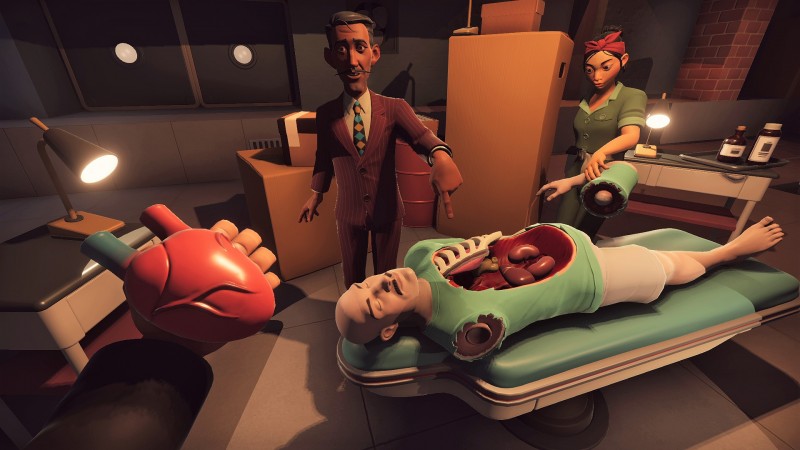 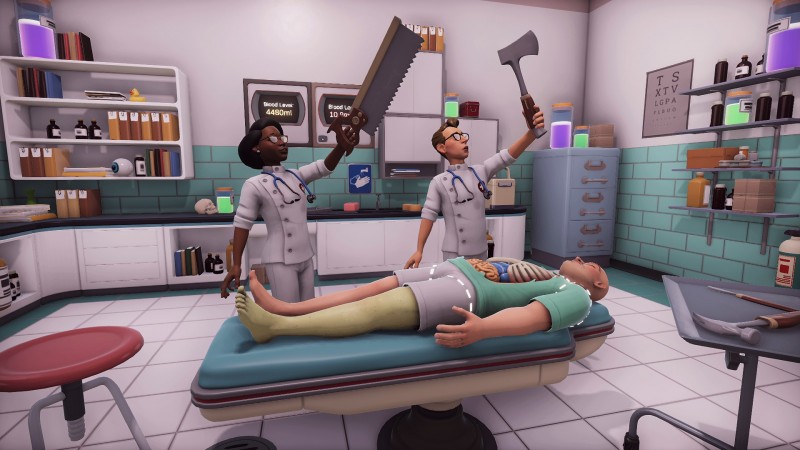 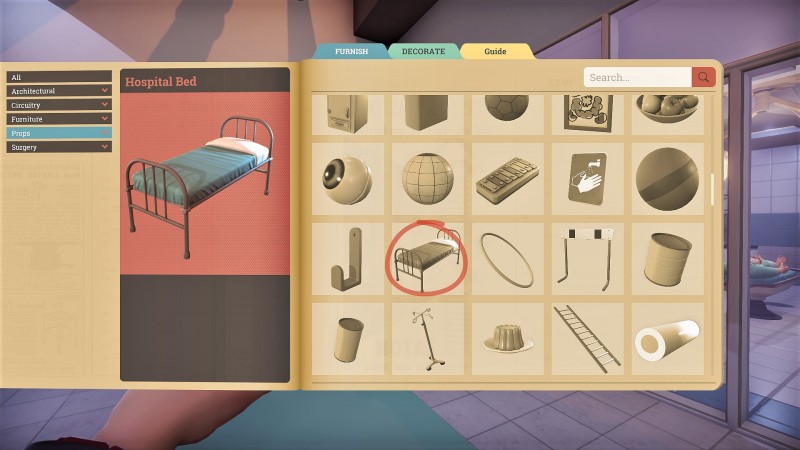 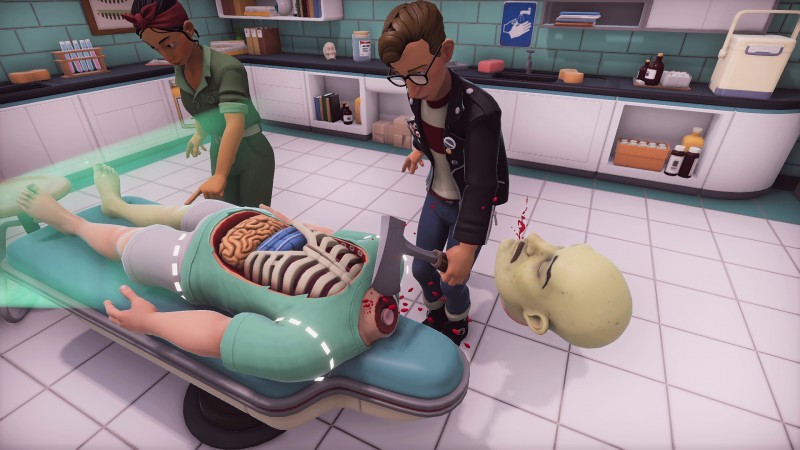 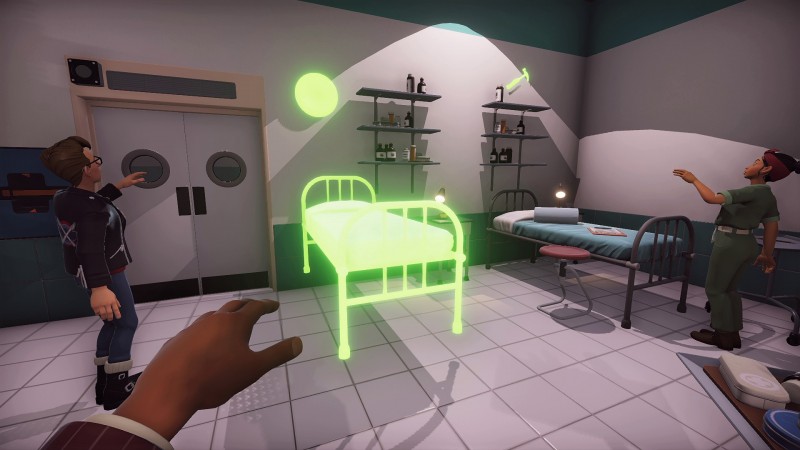 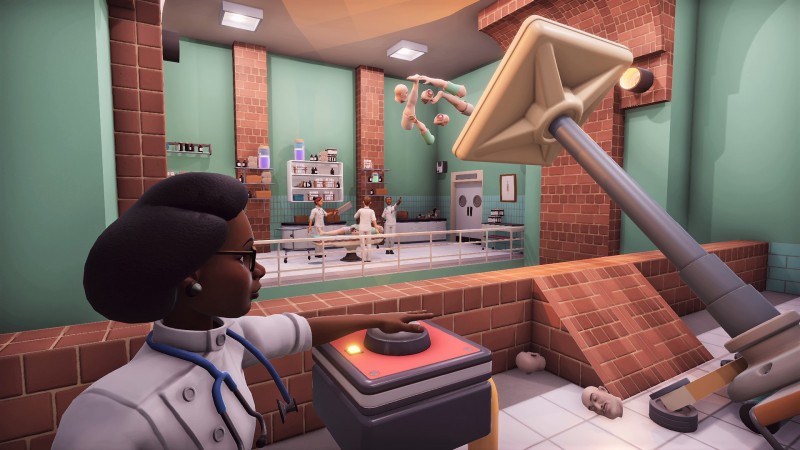 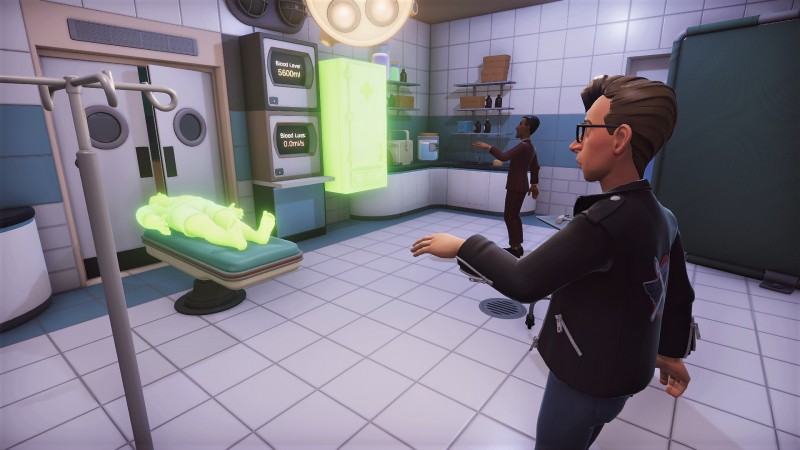 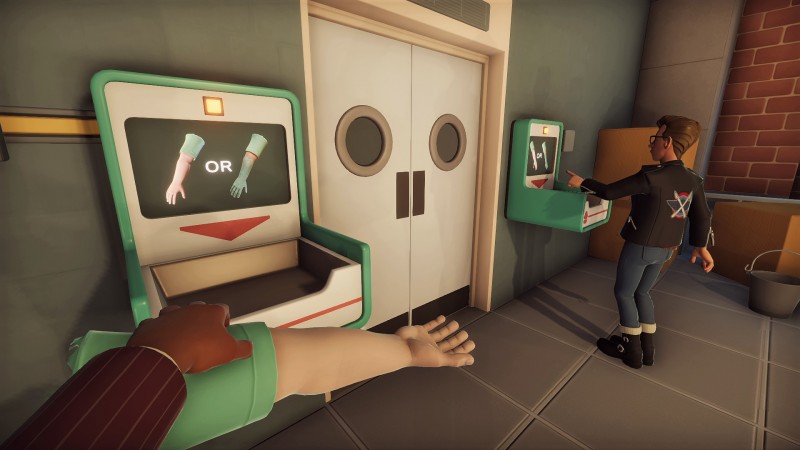 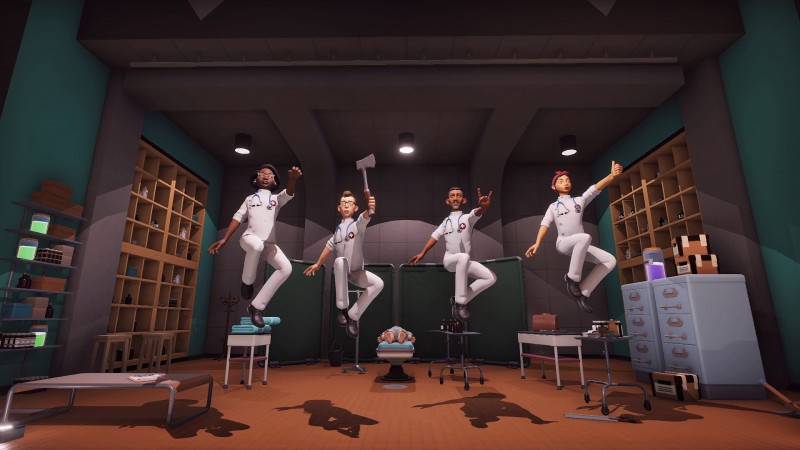 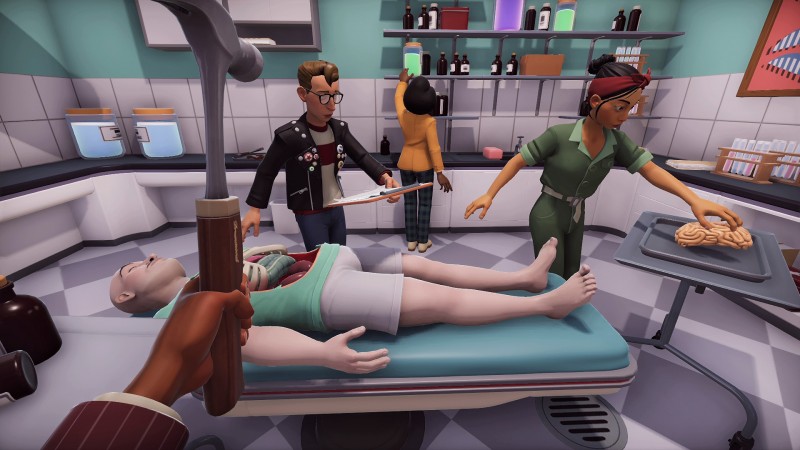 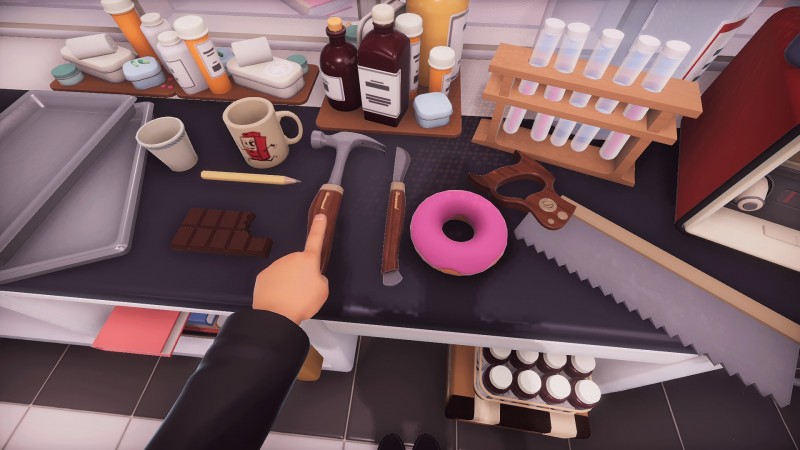 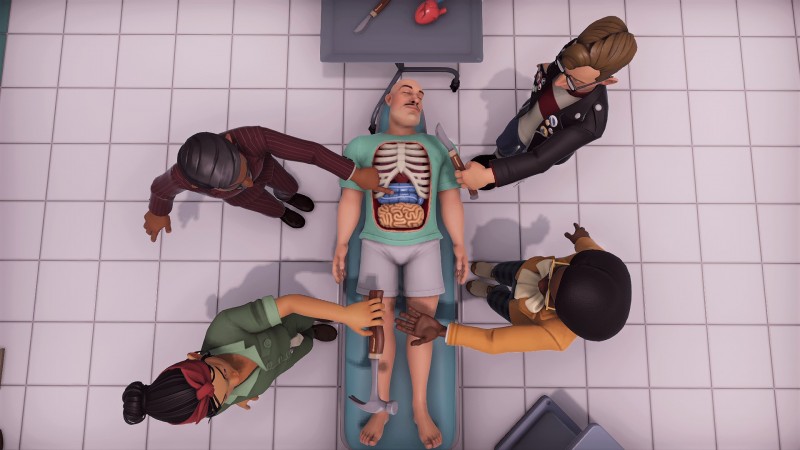 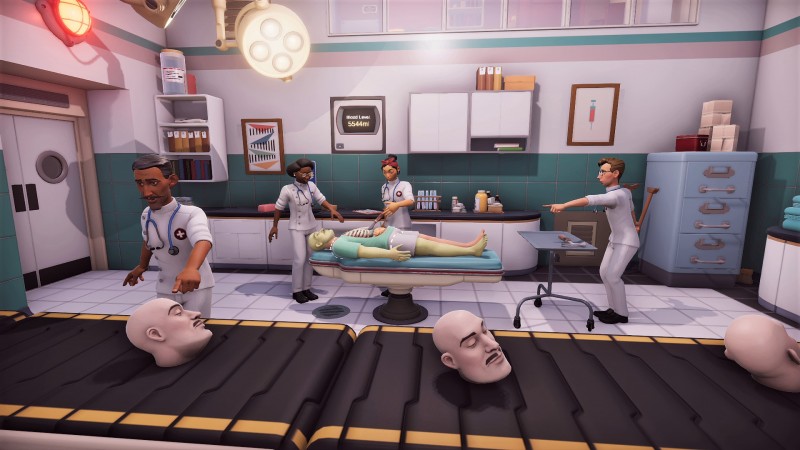 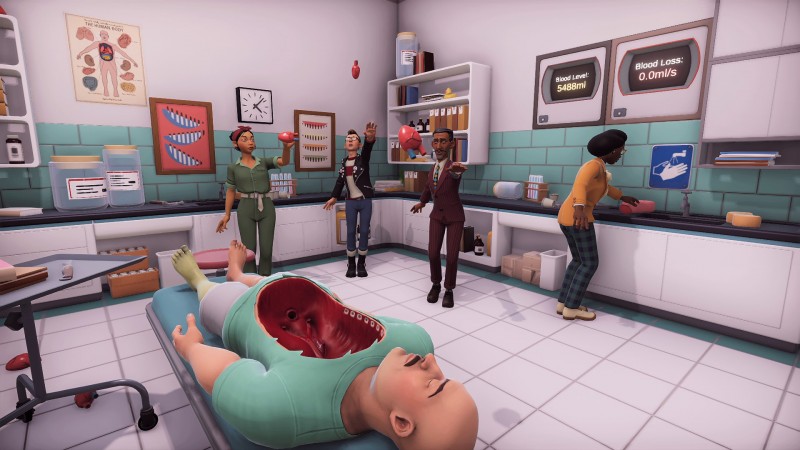 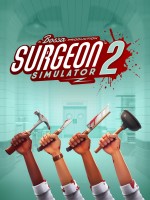