Jill Valentine is about to have a very bad day. As she keeps zombie hordes at bay and tries to get out of Raccoon City unscathed, a hulking beast named Nemesis is in pursuit. Much like Resident Evil 2's Mr. X, Nemesis can only be slowed and will continue its hunt after it catches its breath; he can even punch his way through walls. Capcom released a new trailer that shows just how terrifying this threat can be. Thankfully, Jill isn't alone. Carlos, who players will get to control in this remake, is also around to take a Nemesis punch or two to the face.

Resident Evil 3: Nemesis is slated to release on PlayStation 4, Xbox One, and PC on April 3. The game comes packaged with a asymmetrical multiplayer mode called Resident Evil: Resistance, which pits four survivors against a mastermind. 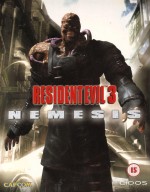