Ever since Gears of War 2, Horde mode has been a staple of Xbox's bloody shooting franchise. The ceaseless exhilaration of digging in your heels and defending a point from progressively difficult waves of enemies has kept players coming back for more, and it's always exciting to see how the team behind the series ups the ante with each passing entry. With Gears 5, The Coalition keeps the core conceit the same – players join up with a squad to fight off 50 waves of increasingly difficult monsters – but the developer is changing several elements that turn the series mainstay on its head.

The biggest alteration is similar to ones we've seen in the game's other modes: the appearance of hero-shooter-lite mechanics. Much like Arcade mode in competitive multiplayer and the new Escape, the character you chooses has sweeping consequences for how you play. At launch, players can choose from nine characters: six from the Gears universe, two from the Halo: Reach universe, and one from the Terminator universe. Yes, you read that right: the launch roster consists of Marcus, Kait, JD, Del, Fahz, Jack, Emile-A239 and Kat-B320 from Halo: Reach, and Sarah Connor from Terminator.

For Gears 5's Horde, each character has a passive and an ultimate ability. While the passive abilities are important, ultimate abilities have the potential to turn a disastrous wave into a successful one. Hopelessly pinned down? Activate Kait's camouflage ultimate to turn her invisible and get the perfect flank on your enemies. Desperately need some backup? Del's ultimate summons tracker robots that target nearby enemies. Some ultimates also affect nearby allies, like Marcus' Living Legend ability, which grants him and all nearby players auto headshots. If you use that ultimate in conjunction with Fahz's X-Ray ability which lets him see and shoot through walls, he'll be able to blast away Swarm skulls through walls with deadly efficiency. 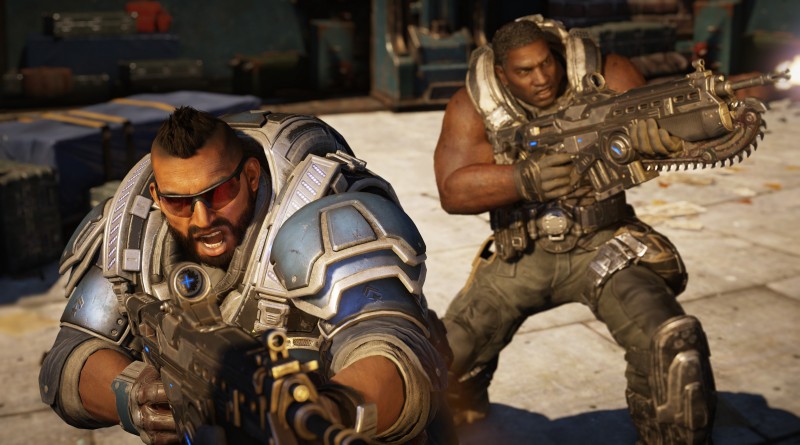 While the characters from Halo: Reach and Terminator are interesting additions, Jack is perhaps the most unique addition. Yes, Jack, the hovering robot that hacks things for the COGs. Unlike the other characters, Jack can't inflict massive damage. Instead, the handy little bot hovers around the battlefield, shocking enemies into a stunned state. Stunned enemies stand upright, opening them up to easy shots from Jack's allies. Jack can also boost teammates, making him extra handy. Jack's ultimate allows him to hijack an enemy on the battlefield and wreak havoc using all their abilities.

To encourage players to avoid just digging into a single spot and camping, enemies now drop power orbs, which players must collect if they want to level their characters and their perks within the match. Thankfully, the obtained power is split evenly between all teammates, so if you want to let the team dig in while a more nimble character like Kait (who also has a built-in safety net in her ultimate ability if things get too hairy), you don't need to worry about one character monopolizing the power-up points.

With Escape, competitive multiplayer, Horde, and the campaign now out in the open, Gears 5 is looking like compelling, robust package. I'm looking forward to seeing which modes I sink the most time into when it launches September 10 on Xbox One and PC.