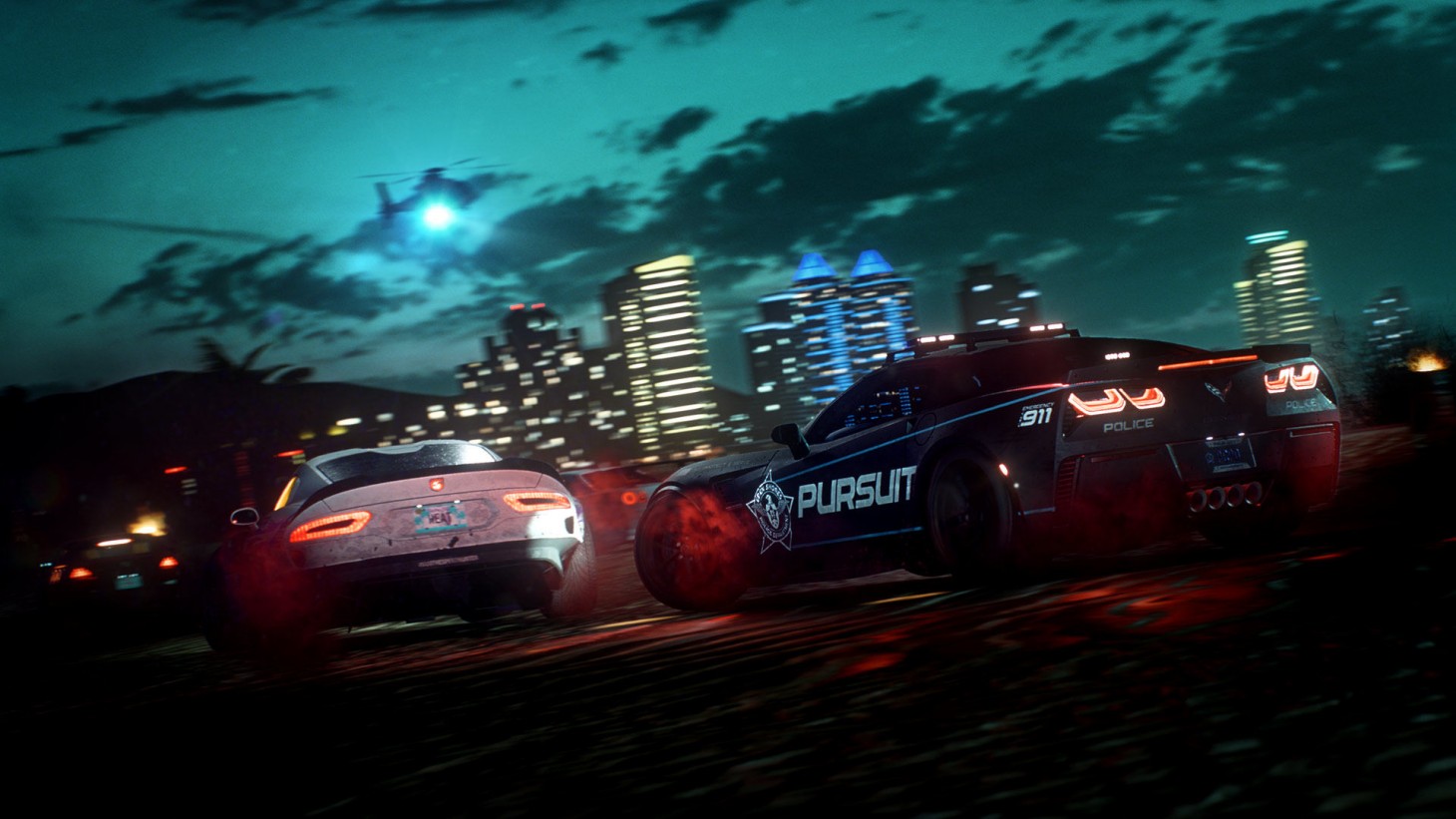 There’s little doubt among fans that Need For Speed is also in need of some new life. The series' past few entries have been bogged down by intrusive microtransactions, poor storytelling, and lackluster settings. However, a beautiful new Miami-inspired metropolis called Palm City – as well as a particularly chaotic implementation of NFS’s classic boogeyman, the street-racer hating police force – might do just enough to propel the series back to the top.

During Gamescom 2019, we got to spend 30 minutes fiddling with customization options and competing in two street races. There is a large array of customization options for those who want to deck out their rides. We were given a sleek-looking Mercedes AMG to play with in a garage before the first race, and I spent a few minutes switching out various models of canards, wheels, splitters, and skirts just to see how it would change the car’s look. Stance tuning, paint and decal options, and even modifying the sound of your exhaust are also options you can tweak. Alongside your car, you can customize your driver's hair, clothes, and shoes. There weren’t that many options in the demo, but they did run the gamut from mundane (like curly hair) to wacky – including being able to don serial killer masks.

The difference between the two races in the demo are night and day – literally. The first race has you gunning around Palm City’s harbor, passing ships and dockworkers in a giant circle. Heat leans more in the direction of arcadey than realistic, with turbo-boosted collisions and spectacular particle effects creating the sorts of crashes that wouldn’t be out of place in The Fast And The Furious. Hitting the nitro, which slowly refills over the race, sends you barreling ahead at breakneck speed for a brief instance of time, letting you hit trees hard enough you rip them for their roots and smashing small walls to pieces. The nitro is also practical, with careful uses of it letting you overtake other racers at a critical juncture. Admittedly, outside of the spectacle and how satisfying it is to pull off a tight turn and eclipse your opponents, the day race is traditional, without any notable modifiers or hooks to make it stand out. The next race, which takes place at night, is anything but and does a great job of demonstrating the tension and surprising amount of emergent storytelling that Heat is aiming for.

The race which took me and the A.I.-controlled racers through the middle of Palm City, crossing through busy intersections and tearing across bridges, started normal enough. We zipped down the road, ramming into one another as we vied for an early lead. However, once I hit the nitro, cop cars showed up out of nowhere. Unlike the cops in Payback and the 2015 reboot, these officers were much more relentless – usefully so. Bumping into cops calls in more cops. When I realized that, I started ramming every one I saw, creating an influx of police cruisers that were smashing into my opponents’ cars and sending them flying off the road. My agent of chaos strategy eventually backfired, as one plowed right into me and forced me to lose the race. However, in the moment, the thrill was so exciting that the loss wasn’t even close to being a bitter pill.

That’s not where the fun ends either. After a night race concludes, the police will chase you, forcing you to evade them and seek out a safe house. This might sound like a chore on paper, but I found the experience immensely entertaining as I darted through alleyways and crashed through barriers in a desperate attempt to evade cruisers and SWAT vans as they tried to bounce me around like a ball. Hearing the officers have detailed, convincing conversations over the police scanner about what me and the other racers were doing also added to the tension and made the chase feel particularly cinematic.

In the end, the justice brigade got me with a spike strip and a fantastic pile-up spectacle that rivals any of the police chases I’ve had in Grand Theft Auto V thanks to the overwhelming aggression and limited means to fight back. There is no other means of defense except your skills behind the wheel. Be crafty or get caught, losing whatever prize money (used to buy upgrades for your car) you gained during the race while also gaining some reputation currency. It’s not clear yet what reputation affects in the game.

There remains a number of questions about how Heat will handle progression and storytelling. However, the strength and intensity of the demo we played as well as EA’s confirmation that Heat is ditching lootboxes entirely after Payback’s grindy inclusion of them has our hopes up that this entry might be the one that puts the series back on track.