As we already know, Avengers is an original story focused on the superhero team’s fall from grace. The A-Day celebration meant to laud the Avengers backfires as a surprise attack on the Golden Gate Bridge serves as little more than a distraction for the heroes as the real threat involved blowing up the Avengers’ Helicarrier and leveling much of San Francisco. As the city struggles to pick up the pieces, anger and blame falls on the shoulders of the iconic Marvel heroes.

Putting The Power In My Hands

This attack sequence serves as the introduction and tutorial of the game. As such, it introduces you to the five playable heroes in rapid succession. I start out as Thor, who wields his mighty hammer Mjolnir. Using the hammer, I bash generic gun-toting enemies over the head with combinations that combine light and heavy attacks. Enemies attack Thor from all directions, but indicators appearing over heads and from edges of the screen alert me of incoming strikes. With a simple press of a button, Thor dodges and opens the enemy for attacks. Thor’s melee combat feels competent, but basic. It’s only once I start using his powers that the encounters feel exciting. Using the god’s lightning, I annihilate the enemies around Thor, finally giving me the power fantasy that should come with controlling the son of Odin. Once I knock around some generic troops on the ground, enemies appear on top of the armored trucks, but Thor can easily dispatch of them by tossing Mjolnir their way. Performing ranged attacks works just how you’d think they would: the left trigger lets you aim, while the right trigger fires. For Thor, that means hurling his hammer at foes, but for Iron Man, who I control next, it means firing his repulsor beams.

As I take control of Iron Man, it begins with an on-rails chase sequence above the bridge. While I control the general location of Stark as he flies over the battle, the automatic dodge is generous when things get in the way. After I shoot down the enemies he was pursuing, the on-rails section gives way to a battle similar to what the Thor section threw at me. However, using Tony Stark often means hovering above the battlefield and raining death from above. Hovering up and down is simple, with one button lifting Stark up and the other bringing him close to the ground. I pick off the enemies one by one, with several uses of Iron Man’s powerful Heroic ability, the unibeam, destroying anything he aims his chest at.

However, while I love Iron Man and his suite of abilities (he’s arguably my favorite of the original Avengers squad), my brief time controlling the billionaire hero was a bit underwhelming. Hovering above the battlefield feels good, but blasting at enemies from afar felt so detached from the action; a ranged hero should still pack some oomph. I also wasn’t a fan of how each time he took damage, he fell from the sky, only to have to float back up to hovering altitude if I wanted to regain my vantage point. In addition, every time I used Iron Man’s unibeam ability, it felt like slamming the brakes on the action as the camera zooms in and Stark slowly turns toward his targets. I’m hoping these various combat modes can be polished and made to feel a bit smoother, as flying around and blasting foes as Iron Man should be endlessly exciting. 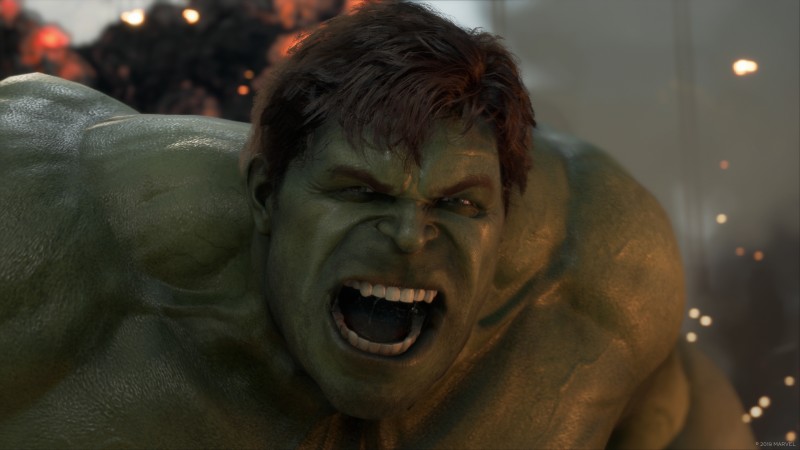 Thankfully, the scene transitions to Hulk, who feels like the unstoppable force that he is. His power lies in his brute strength, and it’s a sight to behold. Hulk can punch with light and heavy attacks just like Thor, but holding the button for heavy attack lets him grab an enemy and slam them around mercilessly. Seeing the bad guy ragdoll as you slam him into his buddies is satisfying, and running from battle area to battle area is fun thanks to Hulk's ability to jump great distances and off flat surfaces. The Hulk segment ends with him taking out multiple enemies with his Heroic ability, his thunderclap, and destroying a couple tanks in brutal fashion. The game accurately captures the rage-induced rampages of Marvel's green giant.

The scene then transitions to the Avengers' Helicarrier above the city with a battle as Captain America. Cap is a bruiser who can toss his shield and bounce it off enemies like a pinball. While he’s still fighting generic enemies, his combat stands out more than Thor’s thanks to his ability to use his shield as either an offensive or defensive weapon.

The final scene of my demo put me in control of Black Widow as she takes on Taskmaster in a boss battle. After a framerate-dipping chase scene that has her riding on his back and punching him through various quick-time events as the other Avengers continue the effort to salvage the iconic San Francisco bridge, the two land on a stable surface and clash. Taskmaster’s signature ability is rapidly learning his enemies’ fighting styles, so I have to adapt each time he catches on to my tricks.

Thankfully, Black Widow has more than a couple tricks up her sleeve. She’s as competent in close-quarters melee combat as she is from long range, and she’s able to acrobatically get out of the way of Taskmaster’s charges. Her combination of martial arts skills and mid-range gunplay makes her arguably my favorite character to control in the brief time I spent with the game. 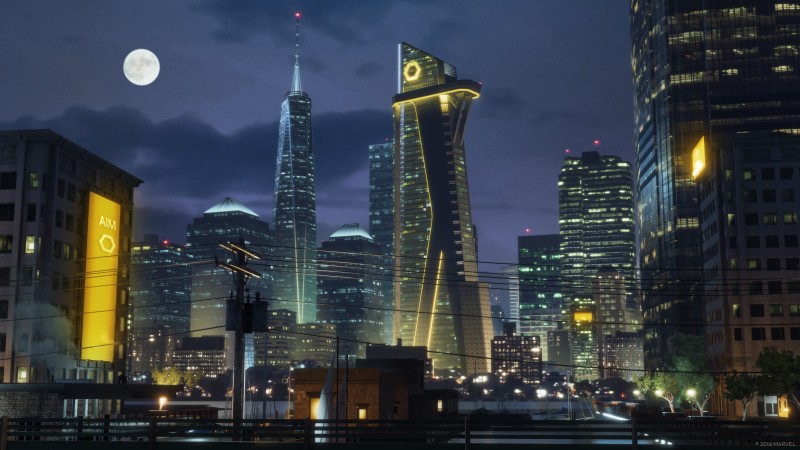 One of Crystal Dynamics’ main goals for Avengers is to tell a unique, all-original story starring the iconic heroes. "Think about how we reinvented Lara Croft," senior brand director Rich Briggs says. "Taking these iconic heroes and reimagining them ... that's just part of our DNA. It's always about that epic, character-driven action-adventure, and it's about telling an original story with these iconic characters."

The fallout of the A-Day disaster affects each of the heroes differently. Captain America is lost in the explosion. Tony Stark withdraws from the world, with no fortune or tech to fall back on. He feels as though he no longer has the answers for what the team needs to do. Bruce Banner begins questioning the role of superheroes and blames himself to the point where gets stuck in Hulk form. Black Widow returns to her life as a spy, as she feels guilty for not being there for Captain America. Thor’s attitude is that he’s no longer worthy to wield Mjolnir, so he leaves it at the Captain America memorial statue and works to serve the people of Midgard.

In addition, superheroes are now outlawed, and in their place is Advanced Idea Mechanics (AIM). Five years after the destruction of A-Day, superheroes are all but gone from the public eye, with AIM’s advanced synthdroid A.I. filling their shoes. However, part of that directive includes “protecting” the public from the super-powered individuals. While AIM puts on a public-friendly face, its pursuit of a society governed by technology could result in one of the biggest threats the planet has ever seen. Despite their reservations about practicing as superheroes again, the Avengers can’t sit idly by and let AIM reshape the world in its image.

With the heroes in disparate places physically and emotionally, the story of Avengers is about reassembling the world’s preeminent superhero team. You do this by traveling around the world and completing missions. While all I have to go off of is the tutorial sequence I played, Crystal Dynamics tells me the rest of the missions are more expansive, feature more difficult enemies and have fewer quick-time events. When you're ready to jump into action, you use the War Table to choose from two types of missions: Hero and Warzone. Hero missions are single-player, narrative-driven stages. These put you in the shoes of a specific member of the Avengers as you advance the story of the campaign. On the other hand, Warzone missions can be played single-player or co-op online with up to four players total. Because these are typically more open, you can choose any hero. Playing either mission type unlocks new content, and grants you gear drops to equip on your character. 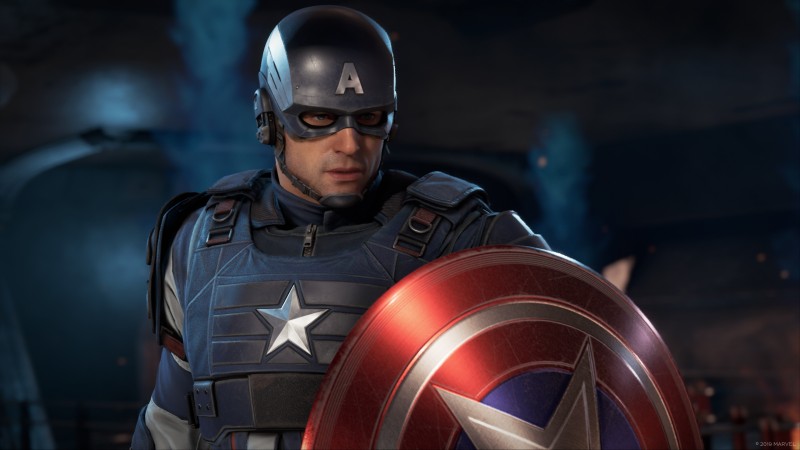 Assembling Your Avengers Your Way

These pieces of gear are important to powering up your hero. Gear is specific to each character, so don’t expect to equip that new rare reactor coil to Black Widow. Gear items can boost stats like melee, defense, and Heroic, and if you match certain sets of gear, you can reap synergy bonuses.

You can also customize your heroes’ various skills and loadouts through large ability trees unique to each hero. For example, with Iron Man, you can unlock new abilities in categories such as melee, repulsor, laser, and rockets. You can customize your loadout however you want, and even swap between different versions of these powers on the fly using the d-pad.

With all of these meaningful customizations feeding into how each hero plays, you can create different archetypes for how you want to play. For example, one player’s Thor might be a close-range brawler with the health of a tank, while another player’s Thor could be a bit nimbler and rely more on lightning attacks. I’m excited to experiment with Thor and Iron Man to see if I can spec them to play a bit more to my liking than they were configured for my demo.

Outside of customizations that can affect gameplay, Avengers allows players to also dictate how their characters look. If you don’t like Tony Stark’s suit in the screenshot above, you can expect a host of other suits to choose from. While chatting with the team, I see suits ranging from mainstream to obscure, from Crystal Dynamics’ take on Captain America’s classic costume and Black Widow’s predator outfit to King Thor and Joe Fixit Hulk. These skins are 100-percent cosmetic, meaning if you have an all-time favorite Iron Man suit, you don’t have to worry about limiting Stark’s powers just so you can equip it. Some of these cosmetic skins can be earned in game, while others must be purchased from the store. The studio wasn't ready to talk about any other potential ways the title could be monetized, but the studio currently aims to keep everything in the store purely cosmetic.

If Captain America, Iron Man, Thor, Black Widow, and Hulk aren’t up your alley, Crystal Dynamics may have you covered. In addition to the SDCC reveal that Ms. Marvel herself, Kamala Khan, is in the game in some capacity (including the opening scene), new heroes and regions to complete missions in will be made available post-launch free of charge.

Avengers launches on PS4, Xbox One, Stadia, and PC on May 15. In addition, PS4 players will have first access to the beta prior to launch.