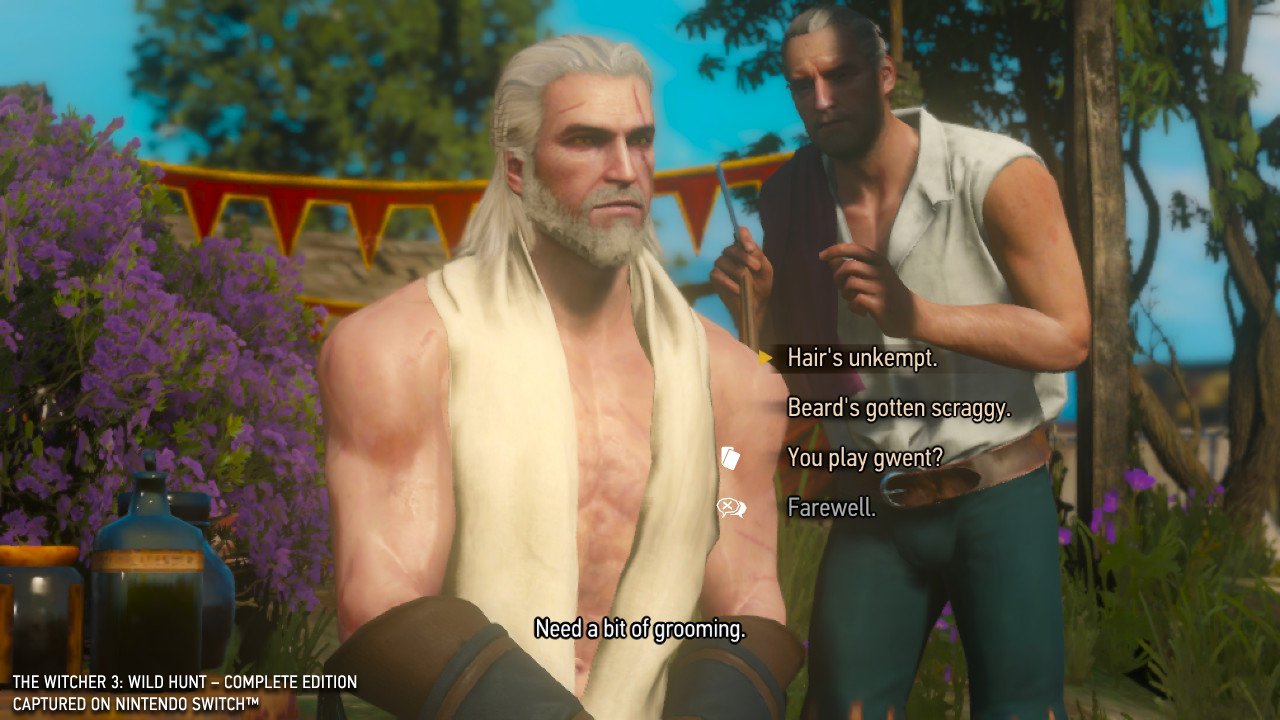 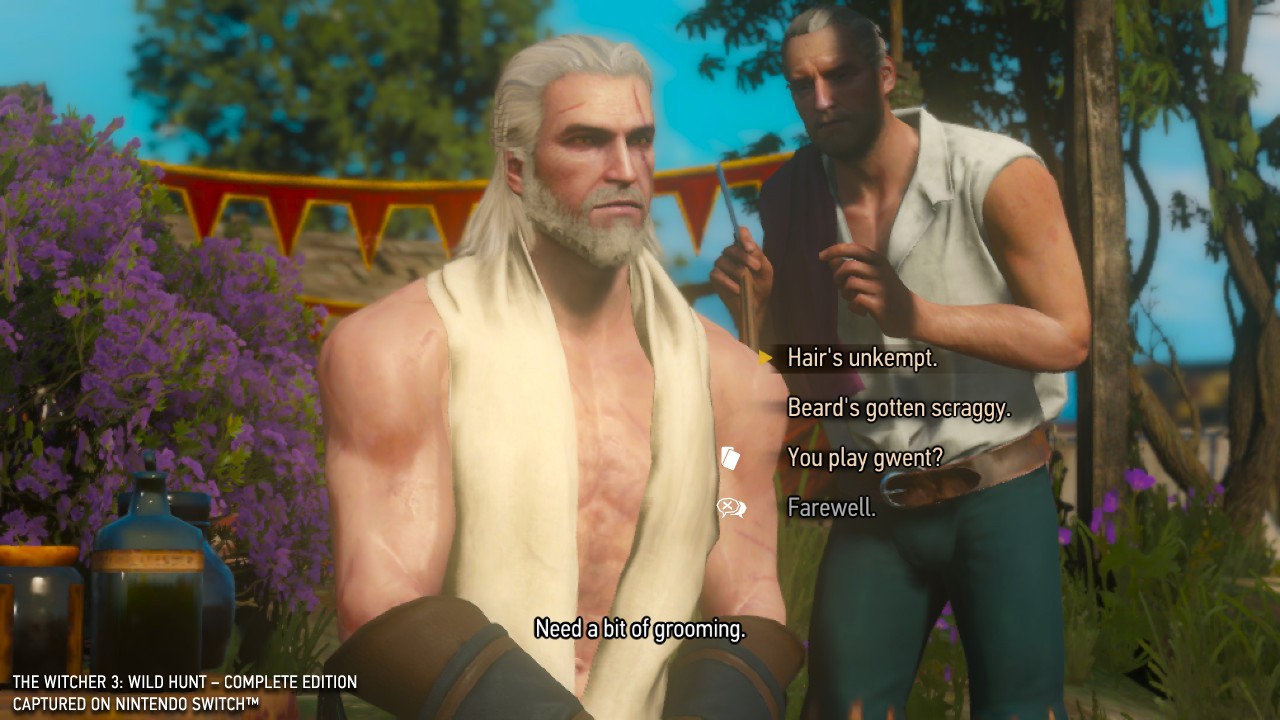 A little while ago, the developers at CD Projekt Red gave me the opportunity to try out The Witcher 3 on Switch, one of Nintendo's biggest announcements at E3 this year. While the game came out a few years ago, it was well known for struggling even on the PlayStation 4 and Xbox One, so the idea of a Switch version was a fundamentally confusing proposition. I wanted to check out the game for, if nothing else, to satiate my own curiosity. I was more than a little surprised by what I played.

To get it out of the way in one sentence: The Witcher 3 on Switch is perfectly alright. It is everything that The Witcher 3 was, in terms of content, on the PS4, Xbox One, and PC. The game plays exactly the same, whether you're fighting a Leshen, riding Roach over the hills of the countryside, or bumming around Novigrad looking for Dandelion. The Witcher 3 on Switch is a perfectly playable version of the game, which is decidedly shocking when you consider just how crammed the game felt on more powerful hardware. 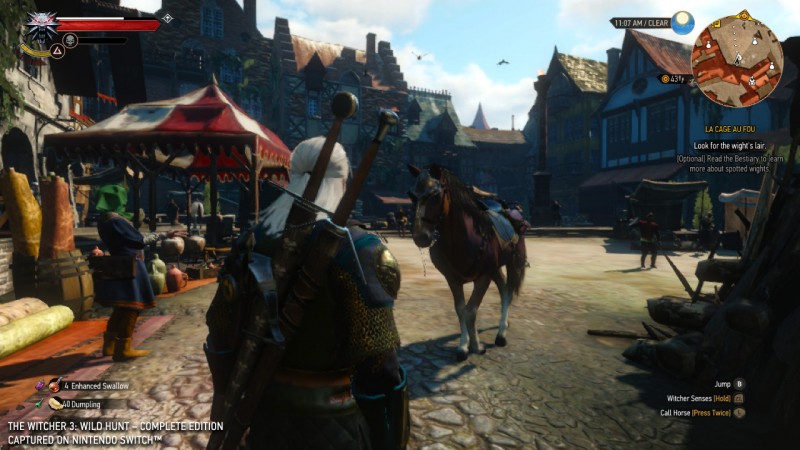 I played the game from the tutorial, which means from Geralt's time in the bathtub, through a bit into the first town, and then further saves darting around the world and the story, all in handheld mode. In the cutscenes, it is absolutely inarguable that The Witcher 3 is the best looking game on the Switch. Overall resolution aside, the character models are fairly difficult to discern from the more graphically powerful consoles. With the Switch, Nintendo made a lot of conscious decisions to use modern technology to create a portable console rather than a graphical powerhouse, but the first few seconds looking at a cutscene of character models talking in The Witcher 3 and you begin to wonder if there were really that many compromises overall.

This isn't to say it's all perfect. The models are great, but it doesn't take long to see where the comparatively lower-powered Switch shows its seams. The textures around the character models look noticeably worse, and then the ancillary environmental textures like ceilings or walls in the background, bear much lower-resolution textures. Obviously some things had to be crammed into a smaller box, and this is not the worst idea to make it fit, but it is noticeable. 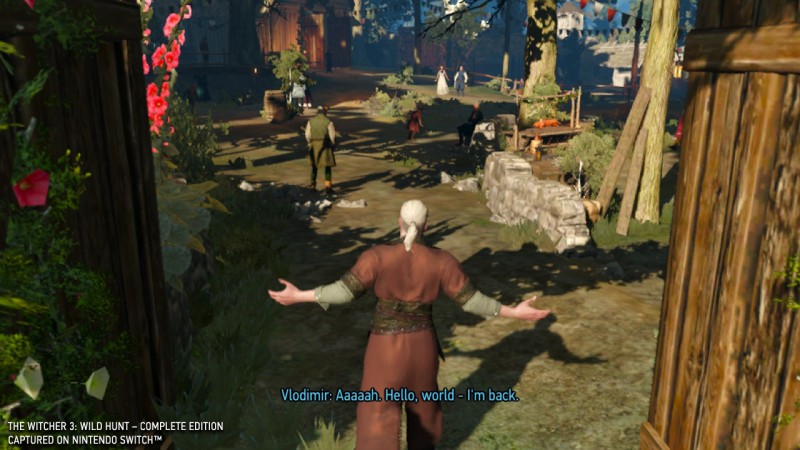 The framerate is consistent, but certainly doesn't feel like 30 frames a second. It's lower, though it does not appear to fluctuate through battles or conversations. I am not sure if the framerate is any better while docked, but I would guess it's somewhere around 25 frames per second in handheld mode, just from eyeballing it.

In a later save, I wanted to poke around Novigrad a bit to see if the framerate holds up, which it does, and if the draw distance could keep up. There were no draw distance issues to speak of that I noticed, nor issues with texture pop-in, which in itself is surprising. That said, there are issues where shadows will pop in occasionally. As much as I ran around The Witcher 3's biggest city, it was roughly similar to how I remembered it when I played the game on PC. 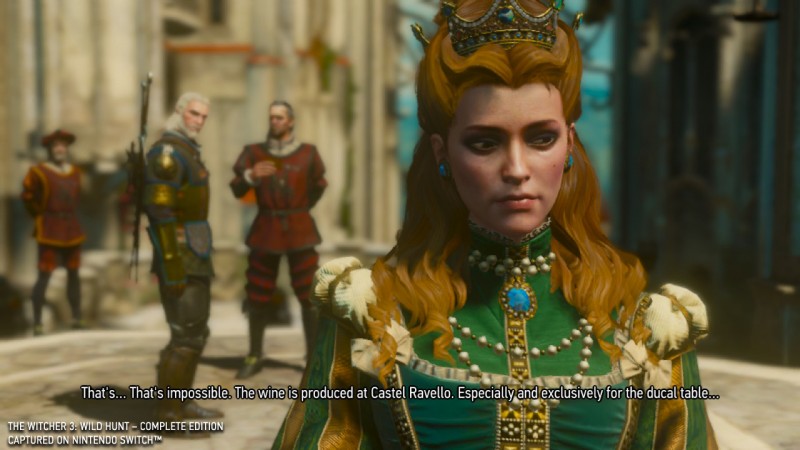 I also just rode Roach, the generic name for any horse Geralt claims ownership of, around the open world. There were no issues of loading or worse performance in the open world. The texture resolution on some environments was worse, but the game's strong lighting tech did a lot of heavy lifting in making it really hard to notice. I'll say again: The Witcher 3, for all its faults, absolutely looks like it could lay claim to being the best-looking game on Switch.

CDPR told me that the game runs in 540p in handheld mode and 720p when docked. In handheld mode, they estimated the battery will last around 2-3 hours, but this was on the old Switch model, so it is hard to say how that number will change on the Switch Lite or updated Switch model. Loading is still noticeable, but felt a little shorter than I remembered from the PC version, usually being about one minute after a death on Switch. Also, the entire game, including all the DLC and expansions, will be on the 32GB cart and part of the eShop download. There will be no additional download for content on the game, like Doom or Wolfenstein have done in the past. 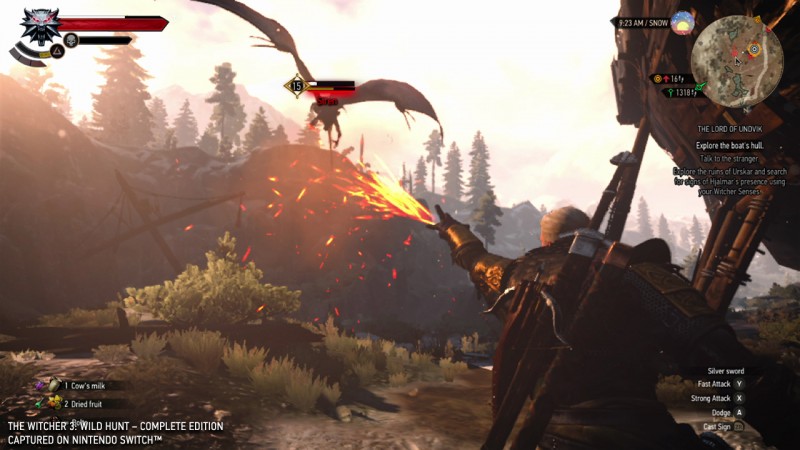 I don't know that, based on what I played, that I would necessarily recommend this version of The Witcher 3 to players with plenty of options and no strong preferences, but it is a lot more of an option than I expected. It is a portable version of one of the best games of 2015 in a way that shouldn't be technically possible, so it is a feat worth noting even if it isn't a feast for the eyes.

The Witcher 3, developed by Saber Interactive and overseen by CDPR, releases on Switch on October 15.