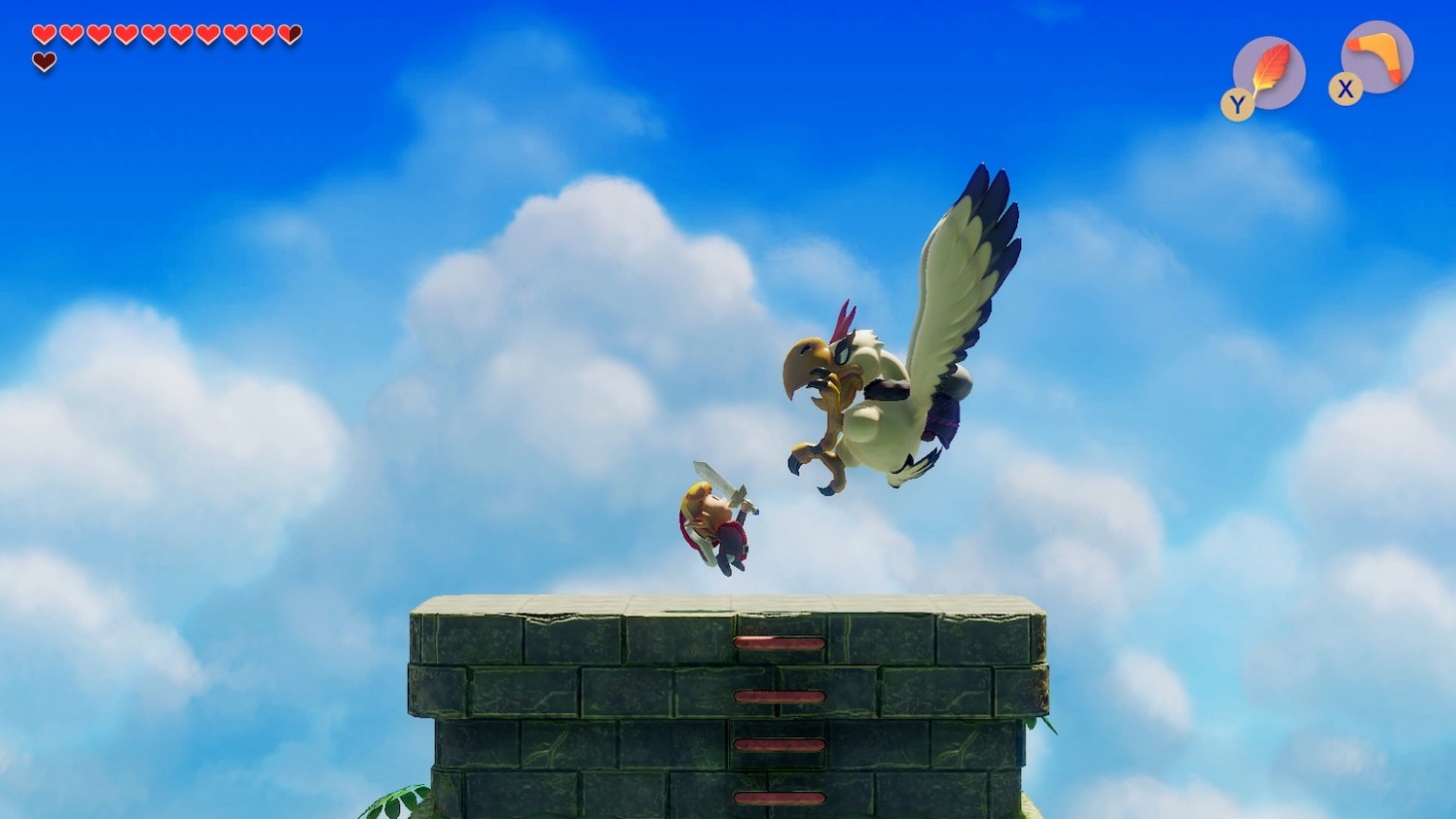 One of the highest compliments we tend to give remakes is that they look and play how we remember them. Spyro Reignited Trilogy, for example, invokes the same sense of wonder we had when we played the original, pointier versions back in the day. Playing the remake of Link’s Awakening, however didn’t feel like I was revisiting my memories of the original. Instead, it felt like a fever dream I had a long time ago had suddenly become much more lurid, and I mean that in the best way possible.

As a remake, Link’s Awakening is more in line with Grezzo’s Ocarina of Time or Majora's Mask remake than, say, Resident Evil 2. My fifteen-minute demo ran me through the paces I remembered from the original game: After waking up in Marin and Tarin’s house and having a quick chat with them (as in the original, Tarin won’t let you leave without speaking to him), I ran out to retrieve my sword at the Tornobo Shores. If you’ve played the original, you’re mostly going to retrace your steps. 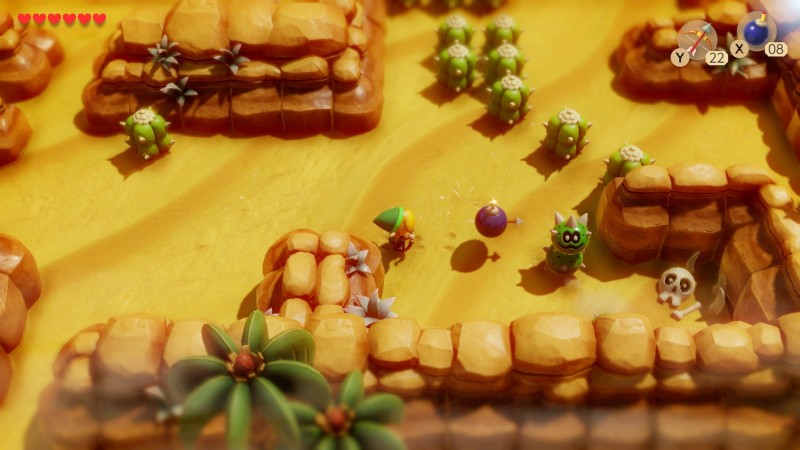 By now you’ve probably seen the game’s art style (just look around this article if you need a refresher), and have your own thoughts on it; a lot of people like it, but quite a few people don’t. Originally, I loved the look of most of the environments, but the characters felt off to me. Link reminded me more of a Funko-ized version of the character than the adventurer I imagined playing as on the Game Boy. But after seeing the game in action, I’m totally on board.

Link’s Awakening is one of the stranger Zelda games. Taking place inside of a dream, it gets away with things that might not work in more serious entries; characters regularly break the fourth wall, discordant characters like Chain Chomps and Kirby make an appearance, and while the places Link finds himself in tend to have conveniently diverse ecologies, Link’s Awakening has an especially weird landmass. It’s a patchwork game in a lot of ways. Crucially, the original Link’s Awakening is also a Game Boy game, which means it looks like this: 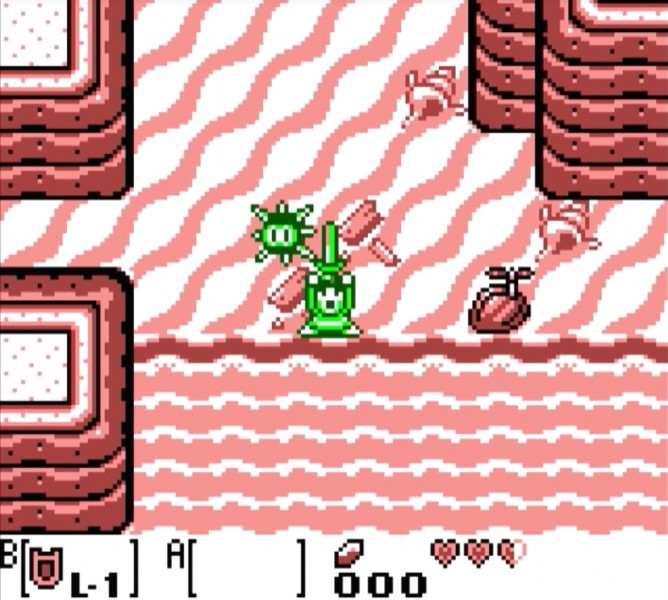 Not only is it retro in the classic pixelated sense, but the color palette is severely limited, which means your imagination is putting in even more effort to imagine what the things on your screen might actually look like. That’s the case for lots of old games, but with Link’s Awakening that effect enhances the experience, since it ties into the dreamlike atmosphere and the feeling that what you’re looking at isn’t real.

The new art style is certainly more nuanced and realistic, but still manages to get this effect across in a new way. The beady eyes on human characters and clean, shiny textures on just about everything else makes everything look like a diorama for dolls, which makes it feel like you’re playing pretend. So it still feels like what you’re doing and seeing isn’t real. That vibe is a big part of Link’s Awakening for me, and I don’t think it would be kept intact if it looked like, say, the Ocarina of Time remake, or if it used a “realistic” art style. 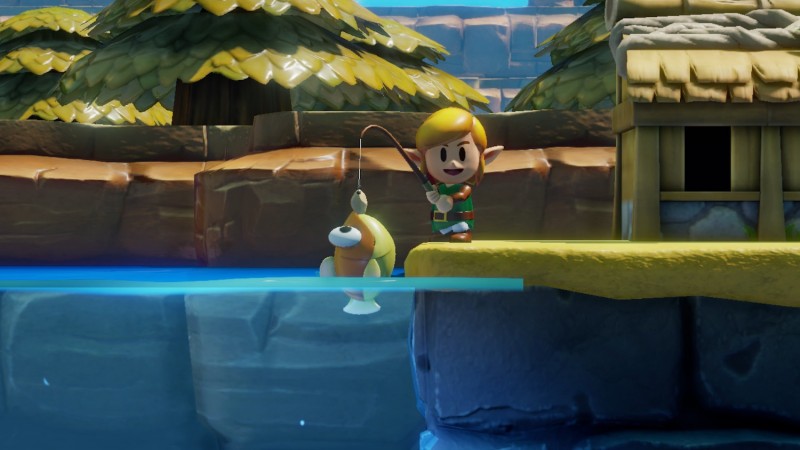 Not every part of the original release is kept intact, but the changes are for the better. You could move in eight directions in the original game, but Link now actually faces the direction he’s moving (instead of simply sliding around diagonally), with matching animations for slashing. It’s strange that this addition actually makes the game feel more retro, and it’s a nice touch overall.

You don’t have to struggle with one limit of the Game Boy, either. This time around, instead of having to equip various items (including your sword and shield) to bind them to the A and B buttons, your B and L buttons are now reserved for slashing and block, respectively. Most of your other tools and items have to share the X and Y buttons, but not having to swap back to your sword constantly should save a lot of menu time. 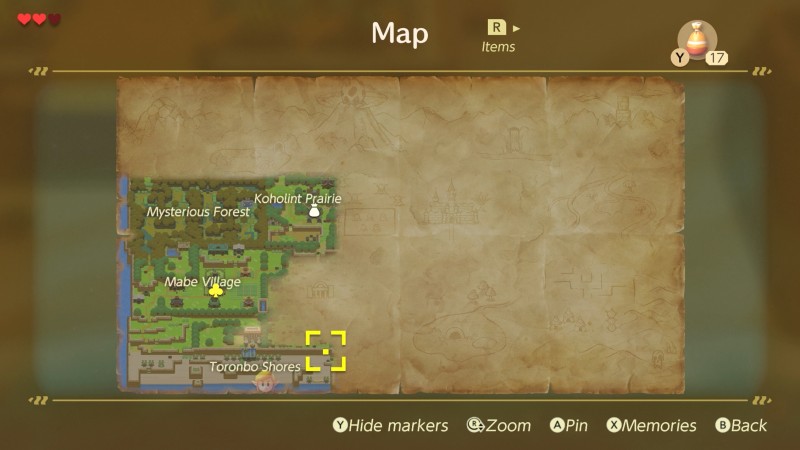 Another improvement is how you keep track of your adventure. Characters in the original Link’s Awakening guided him on his journey, giving him directions about where to go next. You had to remember that info as you played, however, and if you happened to forget where to go (or accidentally skipped a bit of dialogue), it was easy to get lost. Taking a cue from Breath of the Wild, the world map screen now lets you now place pins on it, so you can mark your destination immediately, or literally stick a pin in chests or objects you need to come back to later.

My only knock against the remake based on my playtime is the framerate, which looked like a rock-solid 60 fps in interior spaces, but had a tendency to drop to about half that when roaming outside. This happened both in docked and undocked mode. Hopefully it gets resolved before the final release, as it put a bit of a damper on an otherwise great time.

There weren’t too many surprises besides that, and that’s probably good, since this is a remake, after all (if you’re curious about how the new dungeon-making aspect will work, check out our interview with Eiji Aonuma about it). But what I’ve played makes me excited to revisit Koholint Island when Link’s Awakening comes out on September 20, since it still looks to spark the imagination the same way it did 26 years ago.