NetherRealm Studios has long been the developer to beat when it comes to fighting-game story modes. After 2011’s Mortal Kombat reboot saw the studio’s focus on creating single-player content outside of traditional arcade modes mix wonderfully with a return to the series’ two-dimensional roots, other fighting-game makers have tried their hand at essentially creating a TV miniseries interspersed with regular fights along the way. Playing through the first chapter of Mortal Kombat 11’s story mode at a recent preview event, it’s hard to argue that the format doesn’t work, even if it’s starting to lose some of its luster.

It isn’t that this format is bad, per se; it’s just harder to be maintain excitement about after several games of this style of storytelling, wherein you watch a cutscene, play out a fight for a couple minutes, then watch a few more cutscenes. The fighting feels inconsequential, almost as if it had to be crammed in there.

My demo of the story mode began with the scene from the prologue trailer, in which Raiden, who’s become far less lenient on bad guys after the events of Mortal Kombat X, tortures Shinnok for his crimes against the realms before sending him to the NetherRealm. It’d been a while since I’ve played through the story mode in X, and while I had a good idea of the events that took place up to this point, it definitely felt like I was being thrust into a story midway through. Mortal Kombat had the benefit of being a reboot, and Mortal Kombat X relied on the general outline of the first three games in the series, something most fans were already familiar with. This time around newcomers will have a bit more homework to do, as NetherRealm isn’t planning a primer to catch players up.

The most pertinent plot point in the prologue, of course, is one most players won’t have too much trouble picking up on. Once Kronika, a new character, reveals she’s able to manipulate time, it’s clear Mortal Kombat 11’s plot will focus on rewinding the clock and seeing some potentially interesting what-ifs. That’s one way NetherRealm hopes to change things up with Mortal Kombat 11’s story mode. While the narrative structure will remain the same this time around, the team is focusing on expanding the scope, fidelity, and story beats that play out within it. With time travel in the mix, Dominic Cianciolo, story director at NetherRealm, says the plot will of course involve characters speaking to their other selves. “[They’ll be] sort of wondering about their past, finding things that maybe they would have liked to have done differently, looking back on who they were and where they are now,” he says.

And when it comes to scope, the developer is hoping to impress by simply going bigger. After the prologue, I’m quickly thrust into the next beat, as Sonya Blade (who is now back together with Johnny Cage), briefs a group of special forces, including her daughter Cassie and her friend Jacqui Briggs, about to invade NetherRealm. I play as Cassie for this chapter (you can read a deeper dive on how Cassie's changed this time around here), and my first fight isn’t too far away; as part of a promotion ceremony within the special forces, Sonya decides to test Cassie’s combat mettle. The best-of-three match goes by quick; the fights in these story modes tend to be pushovers right up until the end, so I’m not surprised.

I quickly notice Cassie is no longer voiced by Ashly Burch; this time, the honor goes to Erica Lindbeck, who has voiced characters like Futaba Sakura in Persona 5, Sophitia in Soulcalibur VI, and Menat in Street Fighter V. According to Cianciolo, changing voice actors happens for several reasons. With Mortal Kombat 11 specifically, many classic characters’ facial structures and overall look have changed, which gave the team the chance re-evaluate whether the actor they were currently using still fit the new look of a character. “In some cases it made sense to stick with who we were using, and in some cases, for various reasons, we wanted to switch up," he says.

Working with new actors then prompts more tweaking to the characters themselves. "Once we get into the process of actually being in the booth, if there are particular turns of phrase, a particular attitude or what have you, that suit the actor when we're working with them, then we'll be changing things on the fly in the session to adjust,” Cianciolo says. This also marks the debut of Ronda Rousey as Sonya Blade, but unfortunately, her voicework sounds stiff. She doesn’t sound too invested in her lines, and she stands out among a sea of solid deliveries overall.

We then move on the main event, as the special forces begin to invade NetherRealm, hoping to take out Liu Kang and Kitana, who are revenants of Quan Chi’s evil powers in our current timeline. The initial drop here is much larger than most of the scenes in Mortal Kombat X, with dozens of special forces, Tarkatan soldiers, and other hellish figures ripping each other to shreds; we also see Kabal and Jade, who are aligned with Shinnok’s forces. It’s a lot of characters to keep track of, and from the jump, I get the sense that this is going to be a running theme, raising the stakes of the conflict as the story gets more bombastic. Cianciolo confirms this won’t be the last scene of this size, either. “Over the course of the story, we're definitely going to go all over the Mortal Kombat universe in terms of locations,” Cianciolo says.

That bombast, Cianciolo says, will be contrasted with smaller character moments, which can flesh out characters and lead to better pacing. Mortal Kombat’s world, plot, and characters have always leaned into camp and gore, but when these characters are able to emit more personality, it helps sell the big payoff moments. 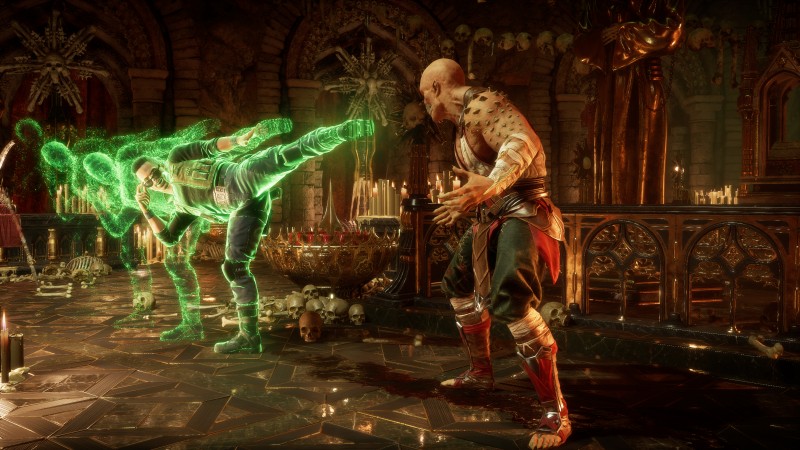 The team is hoping to do that even better this time around thanks to some technical improvements in animation and facial capture. NetherRealm’s offices include some incredibly sophisticated capture and mo-cap tech, and the studio’s most recent game, Injustice 2, was lauded for its facial animations. That said, the team is always looking to refine both their approach and the results they produce. “It was funny, almost all the feedback we got off the facial animation and whatnot [in Injustice 2] was just so positive, it's like, 'Aw man, now we've got to top that and make it better.'” Gianciolo says.

Despite the improvements on the tech side, I can’t help but get a familiar feeling. The invading special forces, which includes Cassie, Jacqui Briggs, and a few others infiltrating the temple as Raiden poses as a distraction outside by fending off the Tarkatan hordes. As the good guys break further into the temple and Cassie encounters a surprise opponent I won’t spoiler, I’m reminded that while NetherRealm’s approach to storytelling still works, even if it’s slightly less exciting each time I run into it.

Recently, I’ve seen story modes that have tried to integrate the actual fighting into the plots they’re telling, and have tried to gamify them to make them more fun; for all its narrative flaws, Soulcalibur VI’s Libra of Soul mode made a fun “game” out of fighting A.I. opponents over and over again. Meanwhile, Super Smash Bros. Ultimate’s World of Light mode, while cutting back on story, implemented its nostalgic romp into the actual fights themselves, modifying them to fit the familiar characters its massive roster was trying to emulate and changing their behavior.

By contrast, Mortal Kombat 11’s story mode feels like a fun if familiar spectacle, and Gianciolo says fans familiar with the company’s recent output can expect something similar in terms of scope and length. But the actual fighting feels like more of an afterthought than a main event. The game’s towers of time mode looks to offer some interesting twists, but I wish they weren’t completely separate. This format of storytelling was exciting and changed how many developers looked at the genre in its heyday, but I can’t help but feel the format could use some sprucing up at this point.

Don’t get me wrong; I enjoyed what I saw in my demo, and with the promise of more realm- and time-hopping to come, I’m excited to see where Mortal Kombat 11’s story goes. And who knows, there might some surprises in store that get me to love this story mode as much as I did Mortal Kombat and X’s story modes. Hopefully, that’ll be the case.