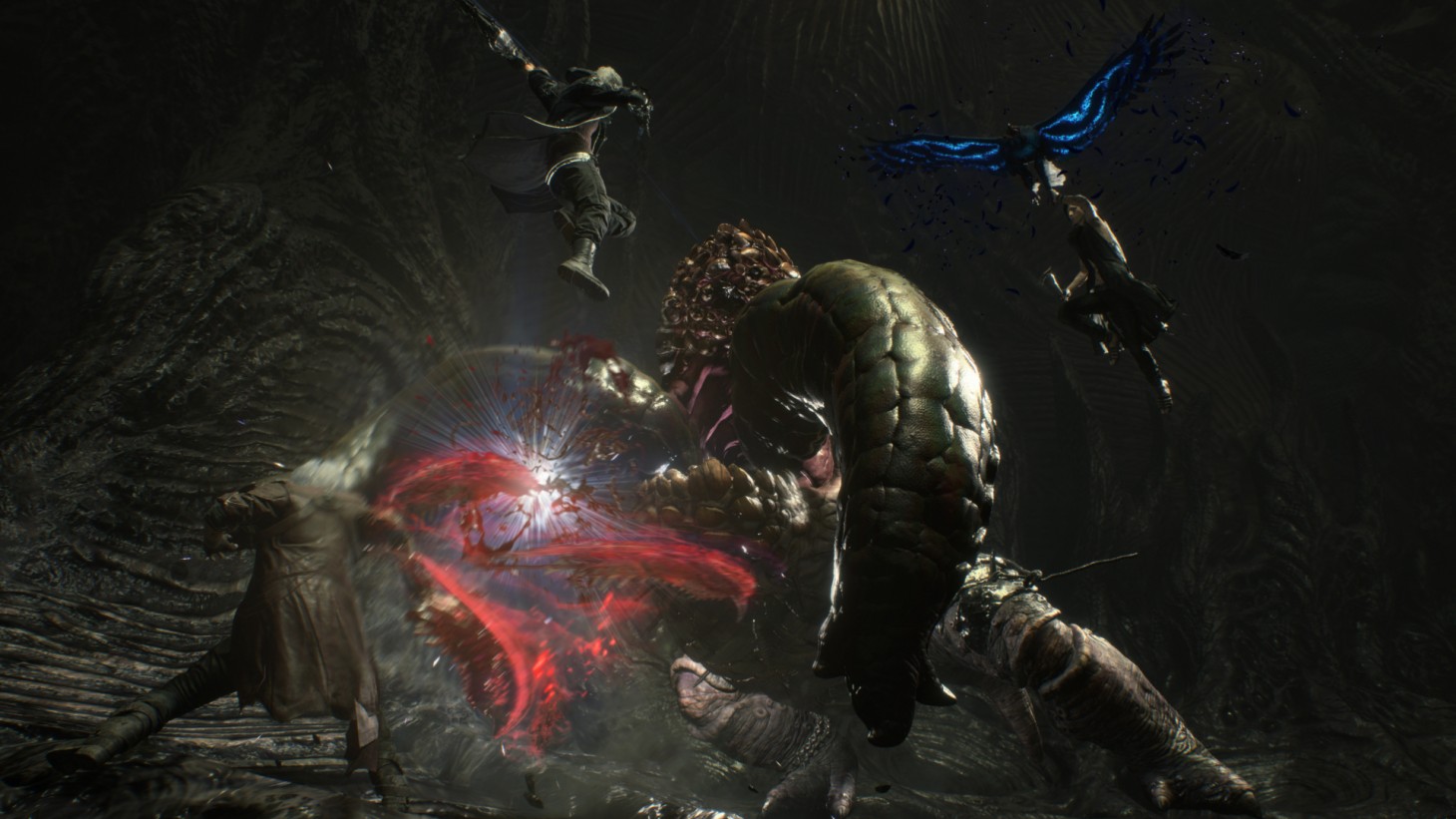 Devil May Cry has had an odd journey over the last decade, going from the well-liked but flawed Devil May Cry 4 to the reboot DmC: Devil May Cry, the series seemed be in an involuntary state of retirement. Even after Devil May Cry 5 was announced, I still had worries about how the game could match up to expectations after ten years of waiting. The question of whether Capcom could make a worthy successor to Devil May Cry 4, or possibly Devil May Cry 3, still rang in my mind. There are so many possible points of failure for a game like this that it’s hard to be completely optimistic.

After playing the first 11 missions and getting my hands on Nero, V, and Dante, I believe any doubts I had seem unfounded. 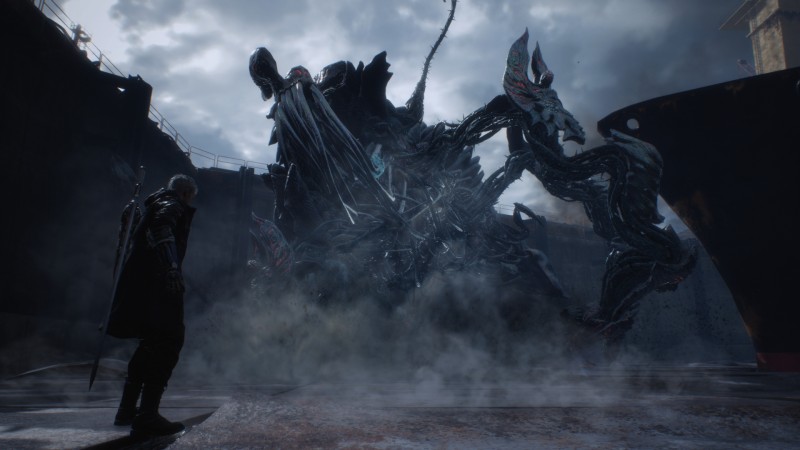 The first eleven missions in the game skip around between the three characters, starting with Nero, interceding with V, and finishing with Dante. While Nero has been playable at trade shows and publicly available demos, the extent to which his new buster arms make a difference is hard to understate. While the first few seen in the game are fairly similar, offering small changes to Nero’s combos, but they soon become the equivalent of Dante’s weapons. The Punch Line can be used to keep enemies off your back, but can also be used to prolong an air combo or keep an aggressive enemy tame while you ready your next revved-up hit. It’s also fun to watch enemies repeatedly get punched with a rocket arm while you stand just outside their range and taunt.

Dante plays similarly to how he did in Devil May Cry 4, which is to say he is complicated. Between his multitude of weapons and four styles, players who master Dante have the strongest character in the game, if not all character action games, at their fingertips. The four styles of Trickster, Swordmaster, Gunslinger, and Royal Guard all return, with Royal Guard having a slightly bigger window for parries than before. One big change is that you can choose how many weapons Dante brings into each level with him, so you don’t need to worry about messing up a multi-weapon combo by switching to a weapon you never use. 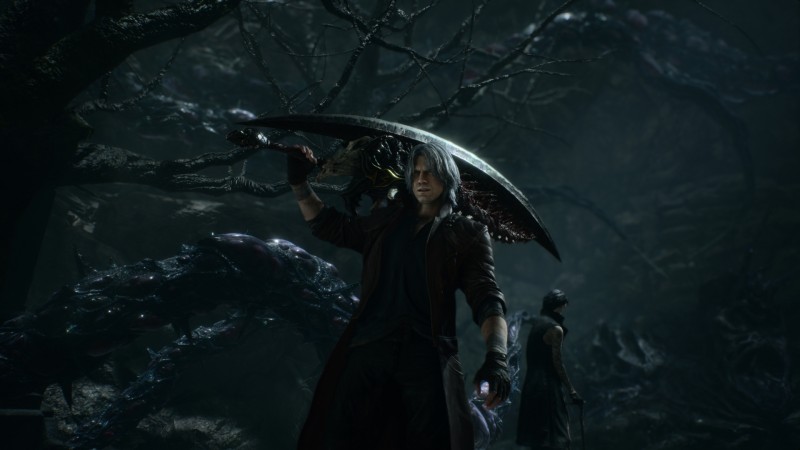 The final question mark of Devil May Cry 5, the enigmatic V, takes a while to get used to. Rather than doing any direct fighting himself, V leaves the fighting to his demon bird Griffon and demon panther Shadow. Griffon primarily acts as a long-range weapon using shots and spells, while Panther rushes in with melee attacks. The proper way to play as V is to use both these characters in concert, as they can act independently of what the other one is doing, while dodging around enemy attacks as V. A third monster, Nightmare, can be summoned when V uses his Devil Trigger, though it acts mostly on its own with tremendous force.

Figuring V out takes work, and occasionally had me wishing for a third character more in line with mainstays like Vergil, Nero, and Dante. Over time, though, I learned to appreciate V’s uniqueness and the different way he played. Devil May Cry makes all its playable characters unique, but V takes it to another level, and I walked away from his levels wanting to explore high-level combos with him. 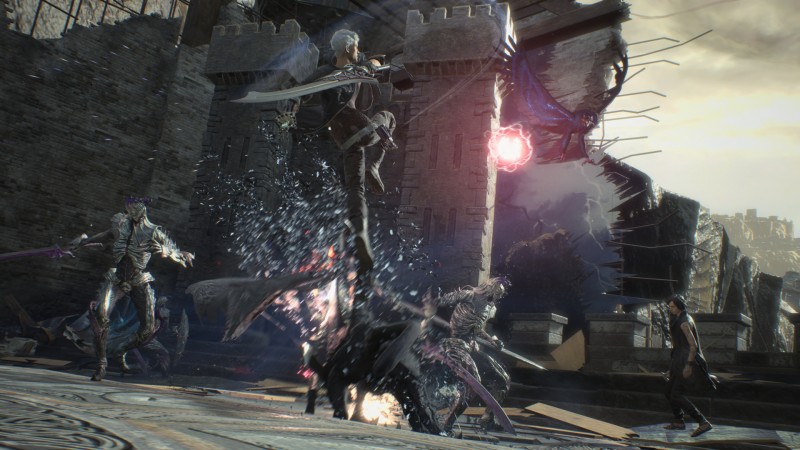 This demo was also the first time I had to try Devil May Cry 5’s multiplayer aspect, known in the game as The Cameo System. During stages, characters that would also be in the area can be seen in the distance, or sometimes even in the arena with you, will be fighting enemies. The game will inform you that their role is being played by a player’s username as you view their ghost data or actual gameplay fighting enemies in the distance. In the demo we played, it was entirely ghost data from the Devil May Cry team, and I could watch them from a distance and see some techniques I wanted to try.

Since characters are often in the same place at the same time, some missions offered the ability to choose your character. One stage gave me the option of going through it as Nero or V, which means there’s some added replay value to going through old stages without making it mandatory, and thus repetitive, like Devil May Cry 4 did. 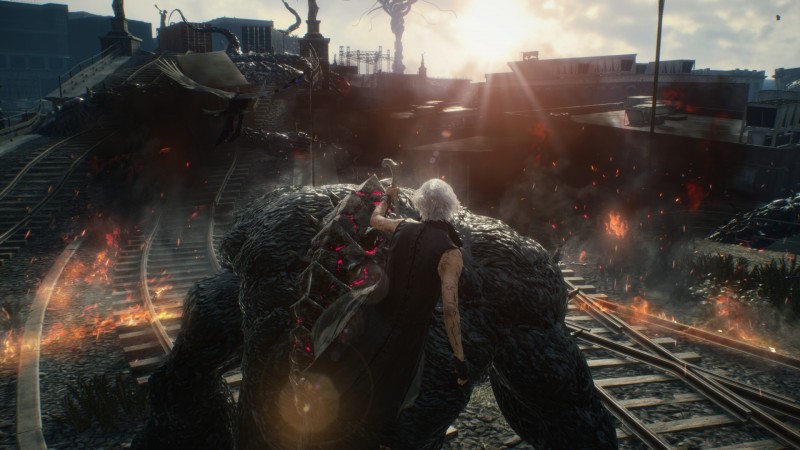 The newest action game in the series feels like a dream to play, as previous ones did as well. You are unlikely to ever blame the game’s controls for foibles and mistakes, though you will end up blaming your fingers for inelegant action as you tumble from a double-S rank to a B in a moment. Style is still the name of the game, but throughout my time with this demo, I was enjoying every second of my time comboing enemies and fighting bosses. With three characters to play with and a ton of hidden weapons, extra arms, and dozens of unlockable moves, Devil May Cry 5 looks to have a lot of enjoyable seconds.

You can also check out video from our demo in a New Gameplay Today where Leo Vader, Joe Juba, and Suriel Vasquez grill me about about the game and whether Vergil is in it (probably).

Devil May Cry 5 releases on PlayStation 4, Xbox One, and PC on March 8.