Our Five Biggest Takeaways From Our Hands-On With Dante
by Kimberley Wallace on Sep 22, 2018 at 10:00 AM
Publisher: Capcom
Developer: Capcom
Release: March 8, 2019
Rating: Mature
Platform: PlayStation 4, Xbox One, PC 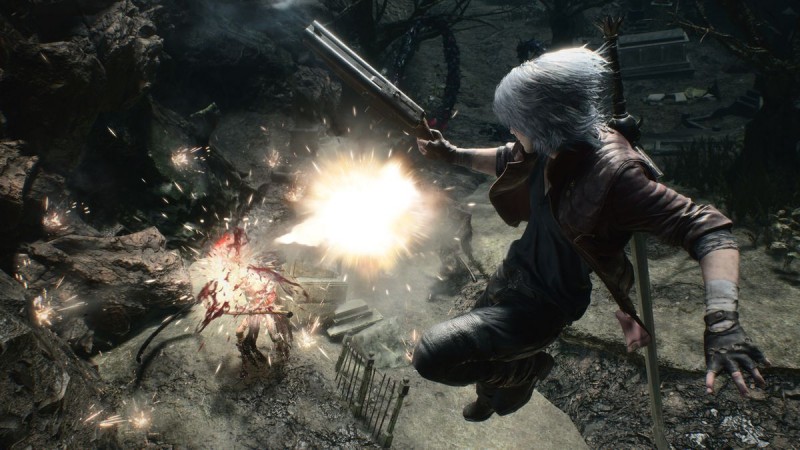 The Devil May Cry series practically invented the phrase “stylish action” with its fearless demon-hunter Dante. A fixture of the franchise since the first entry, it’s not all that surprising that Capcom brought him back for Devil May Cry 5. During the adventure, you will swap between him, Nero, and a brand-new, mysterious character named V. After going hands-on and chatting with the developers about the newest entry at TGS, we can assure you that Dante is still the badass you’ve come to know and love, but this time around has plenty of new tricks up his sleeves. Here are our biggest take away from our extensive demo. 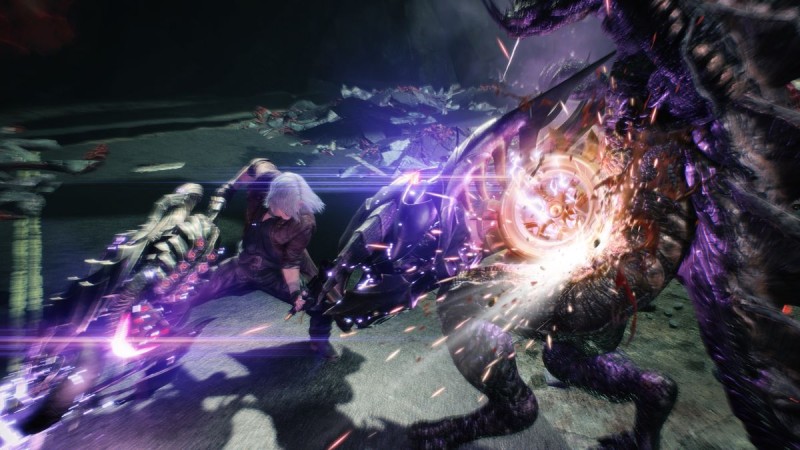 A Different Type Of Fighter

While Dante has his iconic Rebellion sword and Ebony and Ivory handguns, Capcom is adding a lot more skills and weapons to make Dante feel new and exciting. During our demo, we swapped between three different weapons, changing Dante’s fighting style. His standard sword and dual-wielding handguns represent his more traditional style that we’ve seen over the years. In the guns department, he can now wield a shotgun or rocket launcher, which both give you a serious sense of power. You can also use a boxing stance for quick jabs and kicks, which are great if you want to get up close and personal with an enemy. But the best of all of Dante’s new tools is his motorcycle (which we’ll get into more detail shortly), which you can ride straight on or wield as a weapon on your arms.

In my hands-on time, the game controlled smoothly and I liked having so many different options. Capcom is really adopting a “play as you want” approach, allowing players to hone in one specific weapon or strategy, or get more stylish and complex, with a slew of weapons, moves, and combos. As anyone who has played the games know, you must use everything in your arsenal, from jumping and dodging to charging attacks, to get some impressive combos. Watching that stylish score go up is still satisfying, making you push to constantly up your combat grade along the way.

As for changing how he plays a bit, Capcom thought it was necessary. “People are going to expect advances, so this time we figured we should play up the idea that he’s all about customization options,” says director Hideaki Itsuno. “As we did before, you do have the ability to change your styles at any given time, you have the ability to change your melee or ranged weapon whenever you want, and finally what weapons are you going to have in your inventory and what order are you going to have them in there.” 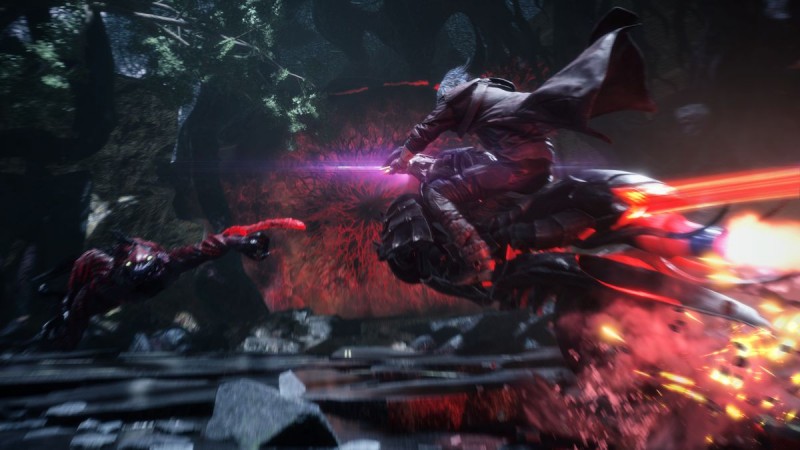 Using A Motorcycle In Battle Is The Best

My favorite part of the demo hands-down is using the motorcycle, The Cavaliere, in battle. We saw this weapon teased at Gamescom, but TGS is the first time we’ve got hands-on with it, and boy is it something. First off, not only can you split his motorcycle into two enemy-eviscerating weapons, but you can actually ride the motorcycle in battle as well, running over enemies to great effect. I didn’t ever want to stop using this weapon; at one point I was doing wheelies, ramming the front of the motorcycle into demon’s throats. Then, I started doing donuts, spinning around to hit the multiple enemies in sight. Let’s put it this way, riding your way into enemies is fun, but it’s also great that you can rip the motorcycle apart and use it as a powerful weapon, slamming it with such force right into them. The former is actually a bit slower and more chaotic to wield, while the latter just feels powerful, almost like you have motorcycle chainsaw to cut through the most menacing of foes. 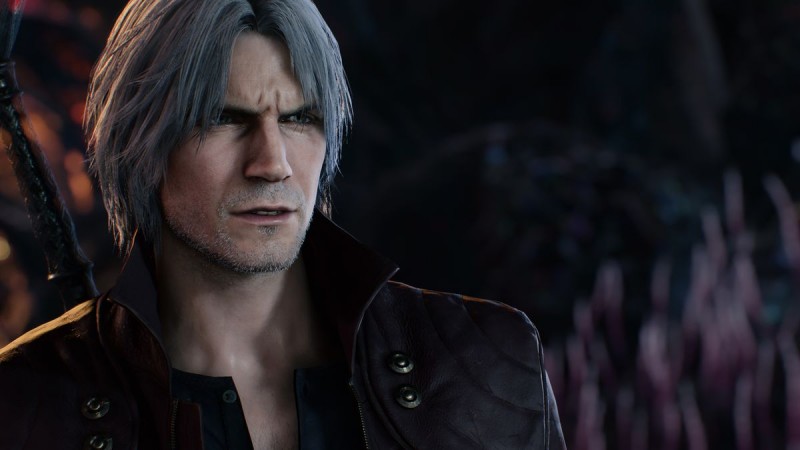 It’s been some time since Devil May Cry 4 and Dante clearly looks a bit older in 5. The developers confirmed some time has passed and said you can look at Nero to help infer Dante’s age. While at first I wanted to scream ‘Uncle Dante!,” I slowly realized he’s the same arrogant, demon investigator who exudes cool. His ego and quips when slicing baddies aren’t going away; however, Dante will show some growth since we last him. “For Dante, he hasn’t changed that much, but hopefully you’ll see in the story that this time around he’s a little more serious about taking this challenge on than he was in Devil May Cry 4. He’s all-in this time,” Itsuno says.

V Adds A Mysterious Dimension To The Story

Capcom also took this TGS to announce a new playable character named V. The team still isn’t ready to talk about specifics, but they did give some hints. First off, if you look closely, you’ll notice V doesn’t exactly hoist a flashy weapon of any sort. He simply has a cane and a book. During our interview, the developers kept reiterating how much differently he’ll play than Dante or Nero. “He’s going to be a strange character to play as, “ Itsuno says. “Just look at what we’ve shown so far, he doesn’t have guns or a sword; he has a cane and a book. So, what’s going on with that? How is he going to fight with these two things?” 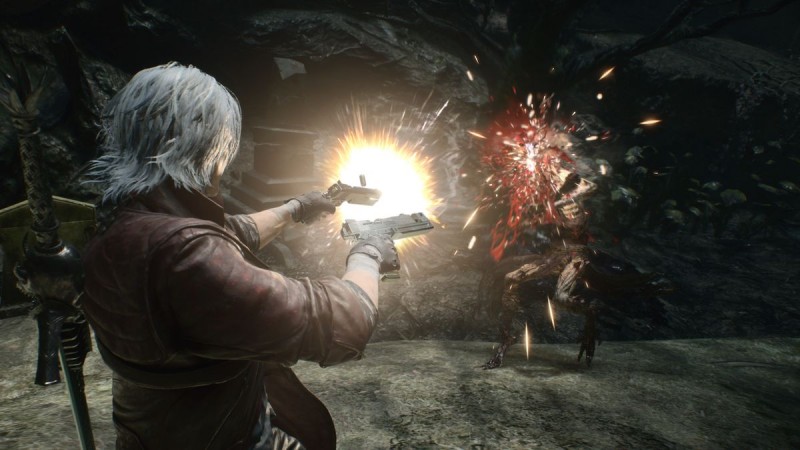 The Game Jumps Around In Time

During the demo, I kept noticing the game displaying different time stamps, making things seem out of order. Asking the developers about this, their response was just as interesting. “That’s really observant and a really good question,” Itsuno says. “The answer is you’re right. You hit the nail on the head; it isn’t linear in that sense. It is going to jump around, but one new piece of info here is that we have three different playable characters and so what you’re going to see the story playing out at these different times from their point of view as they all work towards the same goal.” 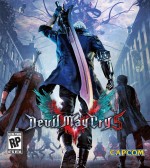