At PAX this year, Devil May Cry 5’s heads sat down in the Wyvern Theater to hold a panel on the latest game in the stylish action series. It’s been a whirlwind tour for senior producer Michiteru Okabe, producer Matt Walker, and director Hideaki Itsuno, coming to PAX West in Seattle after announcing the game only a few months ago at E3 and then showing it playable for the first time last week at Gamescom. Today, the trio sat in front of an audience of DMC5 fans to give a bit more info on their next evolution in action gameplay.

Walker went with classic Dante, while Okabe said Nico, Nero’s mechanic from Devil May Cry 5, is his favorite. This dovetailed nicely into the panel explaining Nico’s humble origins, concepted as a woman that would go into battle with Nero to contrast Kyrie. This isn’t the first time Kyrie has been mentioned in regards to the game, going back as far the reveal trailer where Nero yells her name out without much context.

Early concept art of Nico was also shown, looking more than a little like rival action character Bayonetta, which is probably just a fun coincidence. 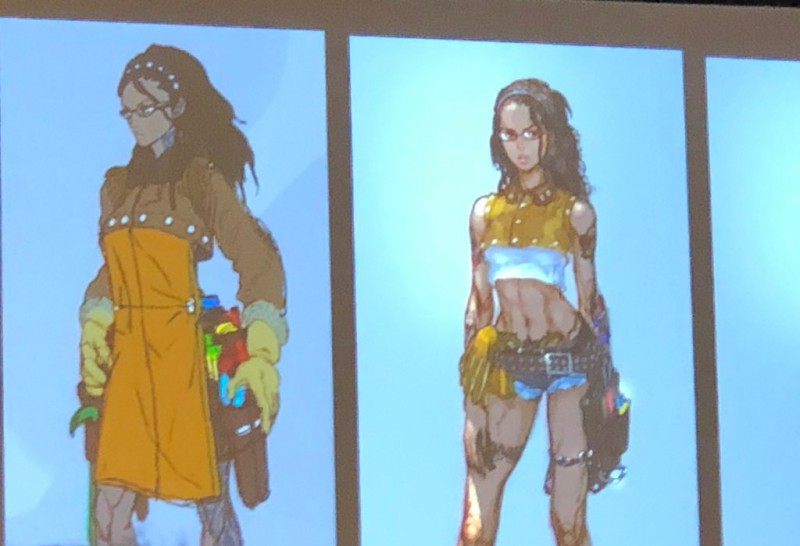 The team took the opportunity to announce new modes for the game, including a photo mode, so players can share their smokin’ sexy styles whenever they want. Another new mode is a gallery, which gives you descriptions and presumably backstory for different weapons, items, enemies, etc. alongside a model viewer. The final one is the requested training mode for players to perfect their combos outside of the game’s main story.

The panel was then able to share both of Nero’s revealed Devil Breakers, his robotic arms, and several unrevealed ones. The first one we already knew about was Overture, which is named such because it was the first Devil Breaker that Nico had ever made. It produces an electric pulse and can aim at the ground, in front of Nero, and in the air. The second was flower-themed Gerbera, which has different attacks depending on if Nero uses it in the air or on the ground. The ground attack, Stamen Ray, is a large laser that move around. The air attack petal ray is multiple lasers being shot at all angles.

The first new Devil Breaker shown was the Punch Line, a bow-shaped wrist with a fist at the end of it. This arm acts as a rocket, punching enemies autonomously while Nero fights. Nero can also jump on top of it and surf around the area, which Itsuno made sure to point out was “something young teenagers would find cool.”

Next was the Tomboy, which powers up Nero’s Blue Rose shotgun and his sword Red Queen. The name is meant to hew closer to the Japanese definition of Tomboy, which is a woman that pushes past normal limitations. In Nero’s case, the Tomboy makes his weapons too powerful for him to control, so he loses the ability to lock on while using it.

Ragtime lets Nero stop time, giving him 2-3 seconds to simply beat on enemies around him. They take their damage while time is frozen, so it doesn’t just all happen at once when the Devil Breaker’s effect ends.

Helter Skelter is a drill that looks like blades curved around each other. When Nero buries his arm into an enemy, hammering the B or Circle button forces the drill deeper into the demon and opens it up so the blades fan out for two levels of charge. It’s not pleasant.

Finally, the last Devil Breaker shown is called Rawhide. This weapon becomes a whip, which can not only bring enemies toward you like Nero’s Devil Bringer in Devil May Cry 4, but whips around him to hit multiple enemies in his sphere of attack. While it didn’t look like it did a large amount of damage, it seemed like a way to keep enemies off Nero in the heat of the moment.

While the rest of the panel did not announce much, we did learn from Itsuno that Dante’s favorite pizza topping is pepperoni, so we’ve at least learned that.

Devil May Cry 5 releases on March 8 for PlayStation 4, Xbox One, and PC.