Spelunky 2 was announced last year at Sony's Paris Games Week pre-show with only a short cinematic trailer. Between the agony of not knowing anything about Spelunky 2 and the hopefulness of knowing it will probably be great like the original game, the lack of information was killer. Now, finally, we get a gameplay trailer and information on the game.

The trailer, which you find below, shows familiar Spelunky gameplay amped to 11. Shotguns, running, rideable animals, ghosts that freeze shopkeepers, A GUN THAT SHOOTS OUT CATS, and more are present in the first footage of the sequel. Perhaps most importantly, co-op in the game will now be online, as well.

Additionally, PSBlog has helpfully posted an interview with Spelunky creator Derek Yu with gives us a few details on the game. Yu mostly points out that the game will be an extension of the first title and they have been adding more and more to make it feel new and instantly familiar to fans.

"We’ve also added liquid physics that are really fun to play with," Yu said, "combined with the destructible terrain you get things like dynamic water or lavafalls that you have to deal with on each run. The world breathes more. And then there’s all the expected new areas, items, monsters, and traps. It really is a lot."

Based on the original trailer, the protagonist of Spelunky 2, named Ana Spelunky, is the daughter of the main character from the first game who was apparently named Spelunky. Other characters like a Sloth with a pompadour and a bomb-wielding tunneler are also in the new game.

Spelunky 2 has no date yet, but it's safe to say it will at least be arriving on PlayStation 4. 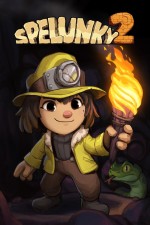