The Just Cause series has never been known for subtlety, but it’s tossing all restraint through the window for its fourth entry. We were wowed by Just Cause 4’s E3 showing, and that enthusiasm has only grown after playing a portion of that E3 demo at Gamescom. Here are five of our biggest takeaways.

1. Getting around is more intuitive than ever

Rico gets around, thanks in part to his skills with a wingsuit, parachute, and wrist-mounted grappling hook. After getting some practice in Just Cause 3, players were able to string together these three abilities seamlessly, propelling Rico along at an impressive clip. It’s been a while since I played that game, but getting back in the groove in Just Cause 4 took all of two minutes. Shifting from chute to wingsuit, then back again feels really, really good. During the demo, I kept hearing about how there were new vehicles with fun little gimmicks, such as a truck with a ramp-shaped attachment that you could stunt off. Sorry. Once I mastered traversal in Just Cause 3, I only drove when I had to. Seeing how well flight controls are in the sequel, I don’t see that changing. 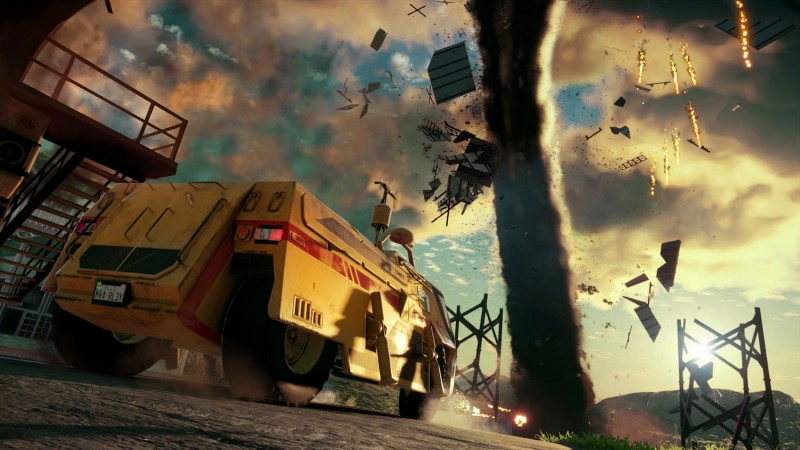 2. Having multiple tether loadouts is a godsend

Just Cause 4’s sandbox is getting way bigger, thanks to Rico’s enhanced tethers and grappling-hook device. He can use it to string objects together, attach balloons to things, or fire propulsive flares to stuff and send it sailing. You can create your own recipes using mods, too. For example, you can set it up so balloons follow Rico instead of simply soaring into the sky. It looked a little overwhelming at the E3 demo seeing the dev swap between three different tether types, but it became second nature after a couple of minutes. Once I saw what each type did, I started seeing the game world as a series of opportunities. It was easy to tether one passing car to another, mount balloons to one of the vehicles, and then send it skyward, with just a few presses of the D-pad.

3. The tornado is no joke

The tornado has been a big part of the pre-release coverage, and for good reason. It’s a tornado. It tears through the world, ruining everything in its path – including enemy bases, traffic, and, as I learned, Rico. I tried flying close to it in my wingsuit, and it didn’t take much effort. It’s a tornado, after all. Its job is to pull stuff inside. I was able to break free of its windy influence, but just barely. It took a lot of diving to accelerate enough to pull away.

I’m not suggesting Just Cause 4 should be used in classrooms, but it did open my brain a little once I got used to its new tools. Our demo started with some experimentation on a bridge, where we all dinked around for 10 minutes or so. It was an absolute riot. Rico has so many different ways of interacting with the world, and the game’s physics rewarded nearly all of my dumb ideas. I put boosters on a car and drove off the bridge, but because I wasn’t particularly careful about their placement I found myself whirling in an absurdly tight circle. Fortunately, I was able to dive out and grapple back up to safely before it careened into a cliff. I put balloons on people, waited a few seconds and then popped them, and then tried to have the bodies fall on me (don’t judge). I wasn’t successful, but I’m going to try again the next chance I get.

5. This game has the potential of being a huge time sink

Ultimately, the biggest takeaway for me was that this game might end up monopolizing a lot of my free time if I let it. I love open worlds and in-game destruction, which is in part why Just Cause has been such a satisfying time over the years. Now, more than ever, the world looks to be as much of a participant in the improvised mayhem as the player. And if I can’t find the time to fully devote my life to the game, there are bound to be some insanely great (or just insane) YouTube moments starting on December 4.