A day after Doom Eternal's extensive gameplay reveal at QuakeCon, I sat down with id Software's Marty Stratton, who serves as the project's executive producer, and Hugo Martin, creative director, to talk about how the sequel will shake things up for the campaign, combat, multiplayer, and mod scene. Stratton and Martin wouldn't give away every secret, yet but did dive deep into what we can expect from certain aspects of this sequel.

Take me back to the conclusion of Doom. You finished it up and started thinking about the future. What was that aftermath like? What kind of discussions did you have?
Marty Stratton: It was quick. We started planning and pre-production right away. We had post-mortem discussions about what we did right and wrong and what we wanted to do better. There was a lot of research on reviews, YouTube, everything. We took it all in, and tried to figure out where to go from there.

Hugo started with the creative team right away; trying to figure out where we would go next.

Hugo Martin: We also hoped to get the chance to make another one, so the story arc started in 2016. We laid the groundwork for the sequel. There was a ton of work to be done across the board, but in that regard, it was about continuing what we started.

At that point you were showing the world what a new Doom could look like. Now you say you are creating an entire Doom universe. That screams of extensive plans. Can you discuss what we can expect from the Doom universe?
HM: We're so excited. It's what we always wanted. It just means [Doom Eternal] has depth and a lot of substance. That's mostly it – that it's something that is worth your time.

MS: There's thought and depth behind every decision, visual, level, and weapon. We tried to build a lot of lore into the codex in Doom 2016. A portion of the audience dives into that. Some people don't even know it's there. We think people that do invest in it appreciate it. With Doom Eternal, we want to make sure it's within arm's reach if you want it. It's all there. There are answers to your burning questions.

A lot of people are affected by the game on a visceral level. They love killing the demons. None of that is changing. What is exciting for me are the conversations that happen around this stuff as we build it. They are so amazing and fun. The ideas and lore are thought through by really creative people. We haven't really put [the lore] out there where people can be a part of it. That's what I love about story games, stuff like Elder Scrolls. They put it out there where people can get it at varying levels. We want to bring people into that conversation a little bit more. We think what we have is exciting. 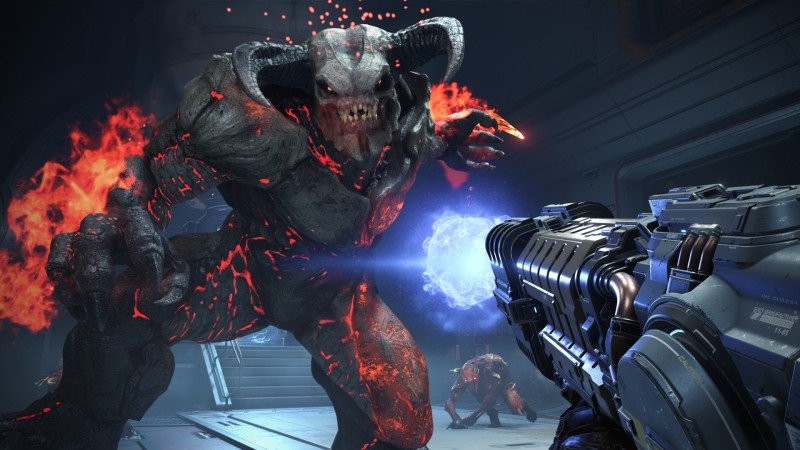 Is that lore mostly going to be off to the side in the codex again?
HM: It's not just lore or backstory. If you want to surf the main game, we have what we call the A story and B story. The A story is the main game, and what the average consumer is going to experience. The B story is context for everything, like who am I talking to, why did that guy interact with me in that way? The key thing when we say "universe" is we want to take the Doom player to places they've never been before. That serves the A story. It's not just about making juicy codex entries, it's about, as you saw with those locations, taking you to new places. As Marty said, Doom is about killing cool bad guys in amazing places with awesome guns. That's it. The amazing places part, and the cool demons part, and the awesome guns part fit into that stuff.

"The ballista is kind of an ancient looking weapon. Where does that come from? Do I get to go to that place?" We just want to make sure that Doom has some fantastic set pieces in it. We're swinging for the fences with this one. We're going to go to some cool places. Doom universe is just about making the game more awesome and fun.

Let's talk about the slayer himself. You guys gave him an upgrade...a few upgrades.
HM: It's the evolution of who he was in Doom 2016. He's still the same guy, but fictionally speaking, he is constantly modifying his armor. Many people call out: If he is this ancient warrior who has been in this eternal struggle between good and evil, why does his armor look modern? There's a good answer for that. He's changing his armor all of the time. He's upgrading it. Superheroes do it. That's a part of that genre. We think of him like a superhero. When he upgrades his stuff, he does it with efficiency in mind. From a gameplay perspective, we always think of that first.

The blade in particular is something we thought a lot about. It's hard for us to glory kill enemies with [the slayer's] bare hands. Some of the demons are the size of elephants. We would talk about the glory kills, and [the development team] would be like "I can't do this." They would put the slayer's hands on the baron's face, and they would look like baby hands. We had to give him a tool. He always had to pull parts off of enemies, which he still does, but now he has a utensil to take out large enemies more efficiently. The first glory kill he does in the demo is faster than any in Doom 2016. [The blade] is faster, it can take out big enemies, it looks cool, and adds variety.

MS: We really tried to maintain the dance, flow, and feel of combat. Everything we've added is centered around that same dance, just giving you new moves to use on the dance floor. That was always important that it was the same dance. We want it to be a tight game loop where the player is thinking of what to do next. The flamethrower, I don't know how much it got noticed, but when you shoot a guy who is on fire, there's a benefit – you get armor shards. It works a little like the chainsaw. It isn't just cool looking, you get gains from it.

HM: Destructible demons are the same. Is [the destruction] all cosmetic only? No. Some of it can be strategic. For example, you can shoot off the gun turret on the Arachnotron. That's his primary attack, and it can be pretty devastating. If you have good aim, and you want to nerf his abilities – he still has other attacks, though – you can take out that gun. As long as something feels like it is promoting the player to be aggressive, it's Doom. All of these things, the doom blade, equipment launcher, it's about being aggressive. 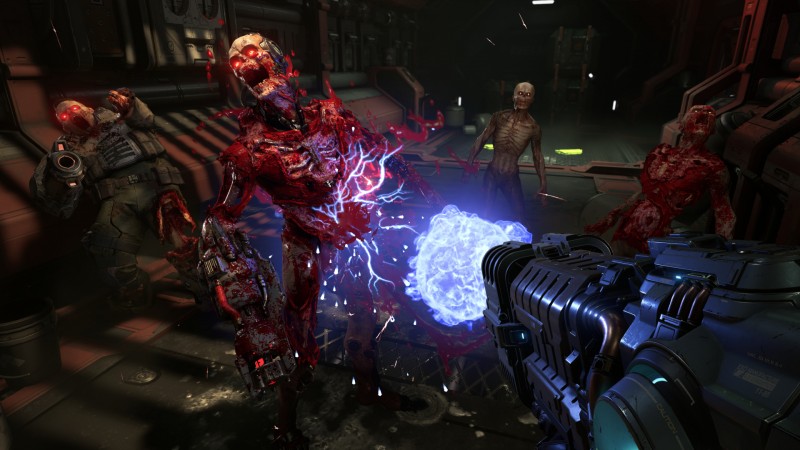 The thing that surprised me the most about the gameplay you showed was how open the spaces were. Are most areas that large?

HM: If the race car gets faster then the race track has to get bigger. That's basically it. Our race car can do a lot of things now, so the track he's on has to be bigger. Talking about our traversal combos, when you double jump to a dash into a monkey bar swing use the meat hook and then wall climb, it makes the ambient spaces more dynamic. Having the tools in place as game designers allows for some really interesting moments, and that includes combat.

MS: The stuff happening around you in these levels is crazy; whether you're experiencing hell on earth on the edge of collapsed buildings or fighting under the BFG 10,000 on Phobos. We're not just taking you to new places. The experiences you're getting in places you've been, like the UAC, you've never seen before in a Doom game. We've really taken that next step. The worlds were great in 2016, but the level of s--- going on around was never at 10. The sky box was never at 10. This time around, when you look around, you're going to see you're in the middle of something big going on.

Can the meat hook latch onto anything?

It has to be made of meat then?

The meat hook is attached to the super shotgun. Does that mean you need to have that weapon equipped to use the hook?

MS: Yup. The way works is when you have the super shotgun out, you hit the mod button and it shoots it out. 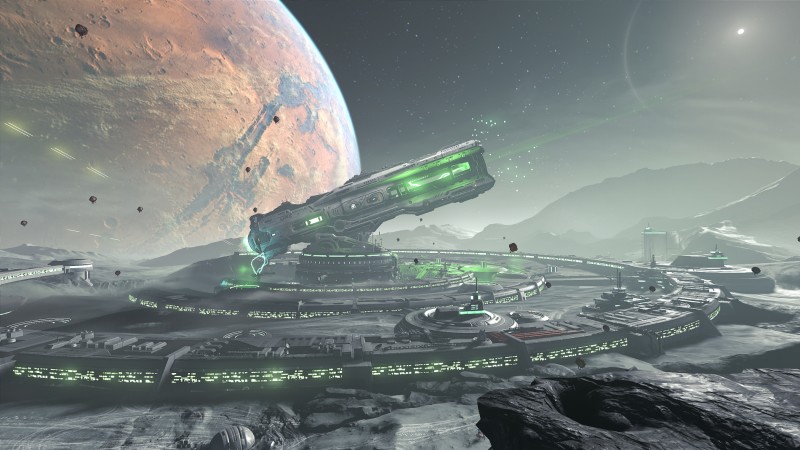 You didn't go into multiplayer, SnapMap, or mods during your presentation. Can you talk to me about your plans for those things? Todd Howard took Escalation Studios, the team that made SnapMap.

I'll start with SnapMap. We decided to move away from it. We loved it and thought it was great, but it didn't scratch the itch we thought maybe it could for people. We touched on the Invasion stuff. That's a whole part of game we think people are going to have fun with. That was a high-level goal for [Doom Eternal]. We're also working on a PvP component. We'll talk about it later. It's also very Doom, as we like to say. It isn't a sidecar experience. We are doing that internally. We've taken all of that in.

MS: [The multiplayer] is new and different. We're also planning for probably the thing that was most requested, which is post-campaign content that we create, not through something like SnapMap.

HM: The campaign, Invasion, PvP, it all feels like Doom this time. There isn't kind of a separation there where you're like "I kind of like the MP, but it doesn't feel like Doom." We were aware of that. We're making it internally now. We're excited about what we have.