We first took note of Zanki Zero when it was announced earlier this year with a flashy trailer and a strong pedigree at GDC. The new game from the Danganronpa producer and director takes the deadly trial visual novel and uses its personality to expand into a different kind of genre.

The world has ended and clones living on an island have thirteen day cycles to grow up and grow old and die until they eventually overcome their genetics to live full lives, setting the premise for the game. Considering you'll probably be spending a lot of time with these characters, it makes sense to get to know them, which this character trailer does in style.

Each character has young, adult, and old variations with seemingly different takes on their foundational personalities. We'll likely get more about the cast of characters, and the weird environment and circumstances they find themselves in, as get closer to the game's Spring 2019 release. 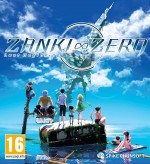