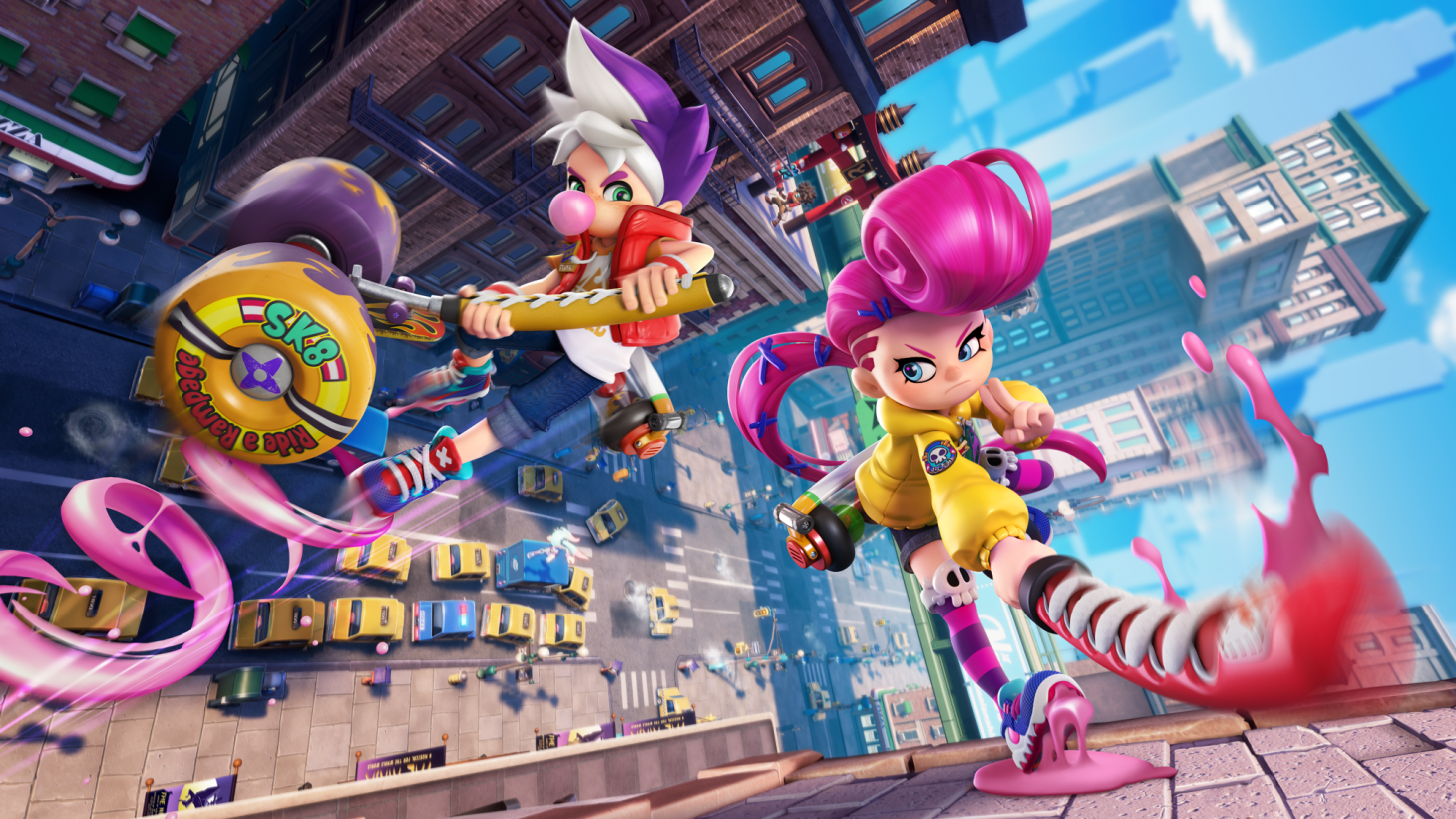 The E3 Nintendo Direct presentation largely focused on Super Smash Bros. Ultimate, but it scattered in a few surprises along the way. One such surprise was Ninjala, a new family-friendly ninja game where characters compete in battles involving bubble gum and inflatable weapons. I went hands on with the colorful title and spoke with GungHo CEO Kazuki Morishita about the new title.

Ninjala gives Splatoon vibes from the very first glance. The colorful, young characters with stylish clothes and bright hair look as though they could be a part of the same universe as Nintendo’s inklings. However, despite the team’s affection for Splatoon, they wanted to make a brawler instead of a shooter.

Before you can jump into 8-player action and beat up your opponents, you must inflate your weapon. You do this by blowing a massive bubble using bubblegum and funneling that air into the weapon. Depending on which gum you choose, you get a different weapon. Weapons range from baseball bats and clubs to yo-yos. The bigger the bubble you blow, the bigger the weapon is.

Large weapons are slow, but powerful, while short weapons can be made quickly and swung fast. In addition, you can use the bubble as a projectile to stick enemies to the ground temporarily or hold it in your mouth to run up walls. If you get the drop on an enemy and charge up your swing, you can unleash a massive hit and score an Ippon – a one-hit K.O. If you don’t want to challenge other players, you can earn points by defeating drones. However, you don’t earn nearly as many points for destroying these harmless robots. 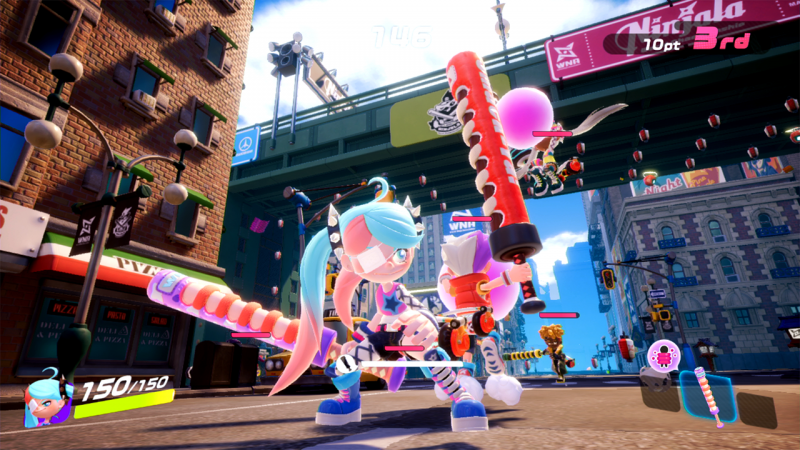 Battles are frantic and fun. Whether you’re running up a wall to avoid a massive bubble heading your way or whacking an opponent over the head with an inflatable club, Ninjala overflows with goofy action and absurd moments.

GungHo recently released the ultraviolent collaboration with Grasshopper Manufacture, Let It Die. Now, the studio is going in a different direction. Rather than focusing on the hyperviolence, blood, and gore of Let It Die, Ninjala is a cute game about young ninjas fighting each other with unimposing weapons. 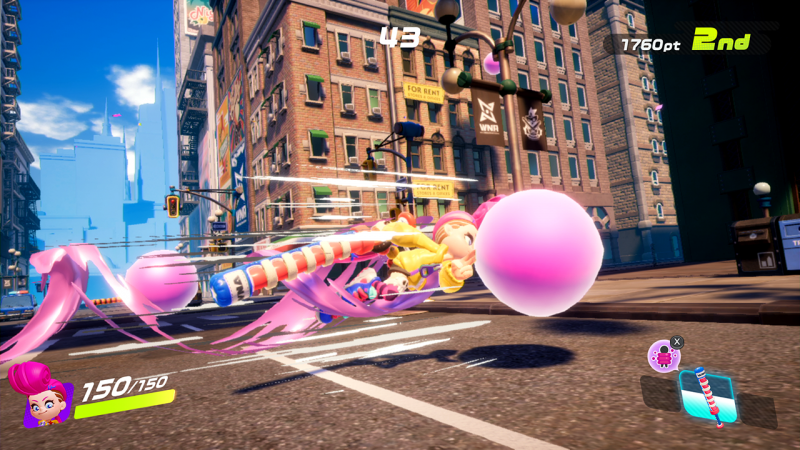 “When I made Let it Die, I had a different environment, and what I felt at the time was different than when I was making this,” Morishita says. “When I was making Puzzle & Dragons, I was making a kind of peaceful puzzle game, but then I got under a lot of stress and that’s where Let It Die came from. [Laughs] Then, after that, I came back with Ninjala. So I feel good right now. [Laughs].”

Currently, GungHo is working on maps loosely based on real cities and regions around the world. I played in the New York map, but so far, the team can confirm Japan, Europe, and Egypt as regions players will visit. GungHo is also planning additional support through post-release updates, but Morishita won’t elaborate on the team’s plans. 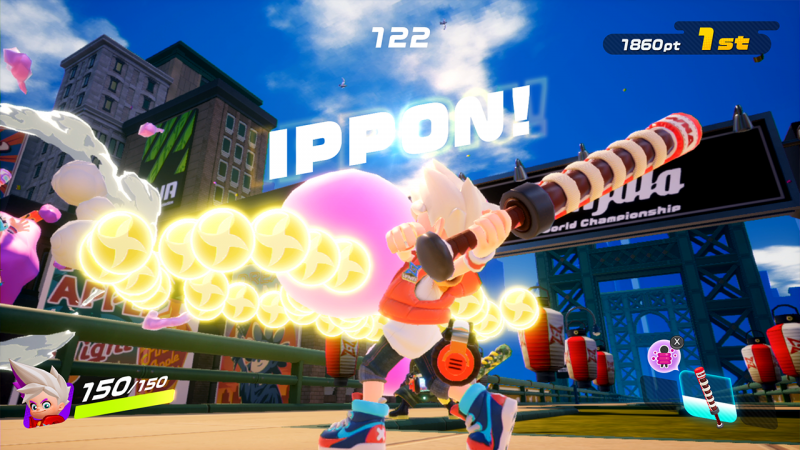 Oozing with personality and attitude, Ninjala is a fun, accessible multiplayer brawler that seems like a perfect fit for Switch’s audience. NInjala launches in 2019 exclusively on Switch. 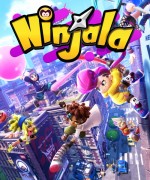