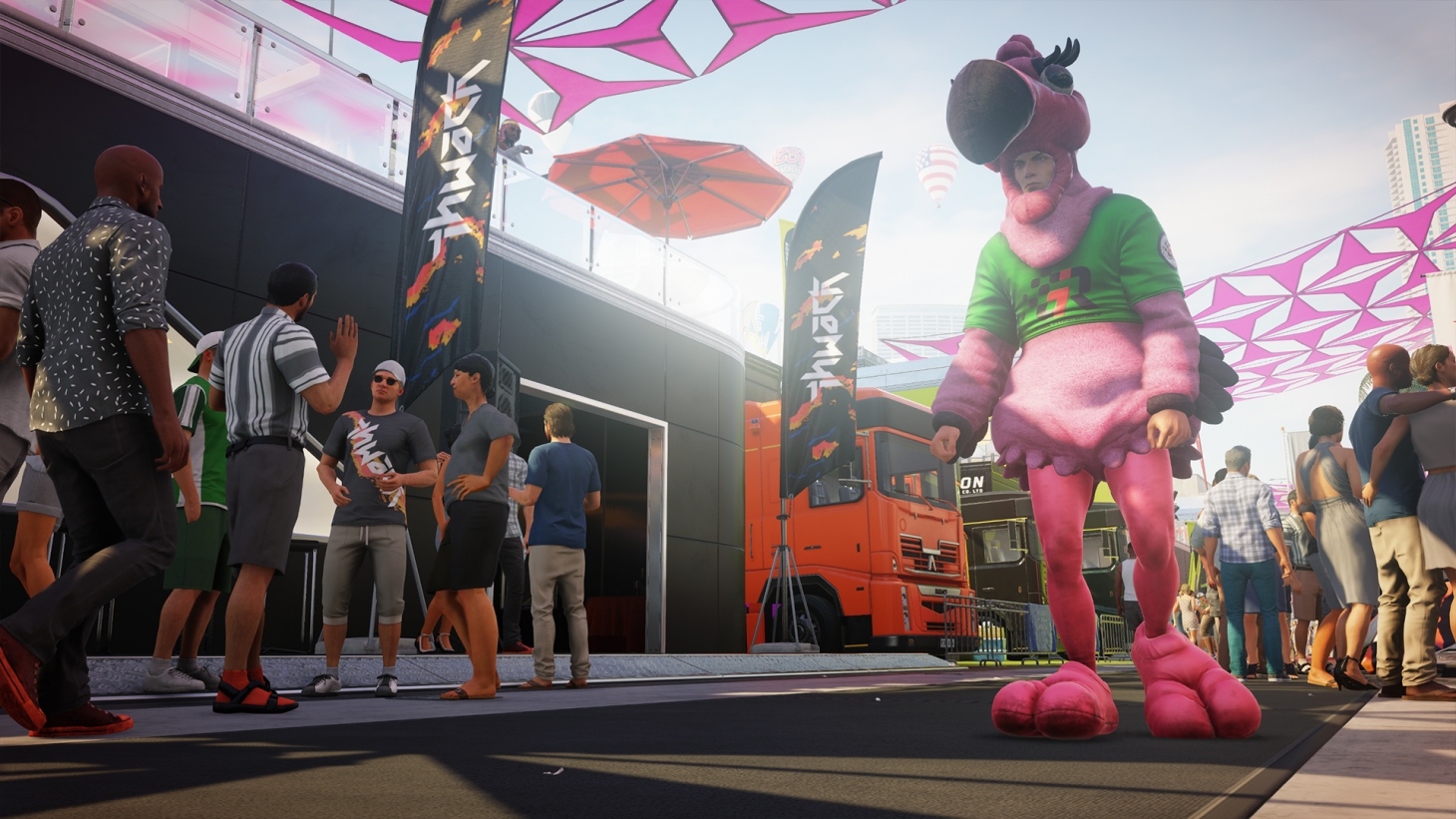 2016's Hitman brought the series back to its roots while making it more elaborate than ever, giving players numerous paths to their target and letting them experiment along the way. While Hitman 2 doesn't change that formula much, it does improve on it, making some under-the-hood changes that should make it easier for would-be assassins to track and kill their targets. It's also improving on the game's release schedule, with the promise of regular updates and a full game out of the gate.

My demo left me with the impression IO Interactive doesn't want to fix what wasn't broken, but is continuing to refine the experience. My mission placed me in Miami, where I was tasked with sabotaging a prominent race car named Sierra Knox at Formula 1-esque race. I began my mission without weapons of any kind, which may have limited my options out of the gate, but made getting through the pat-down at security a breeze.

Once inside the event proper, it's clear Miami is following in the lineage of its predecessor by packing Miami with thousands of people and lots of spaces to explore. IO tells me there are over 2,000 NPCs, and it's a little difficult to get a good read on the place at first. I hop on a set of nearby bongos for a few seconds, then hop off to explore my options. I notice the VIP section, which is sporting a discerning security detail.

As I start to piece a plan together to lure one of the guards away to nab his outfit, Diana Burnwood points me to a red van in the parking garage, which she's loaded with a silenced pistol and an explosive. As I make my way to the van, I notice an inner office inside the parking garage with two guards in it, one of which was asleep at the wheel. After loading up at the van, I scan the edges of the garage for a bit and find a fuse box out of sight of the guards. Sabotaging the fuse box turns the power off in the office, luring the one conscious guard out of his post. After subduing him and dragging his body into the locker located right next to his fellow unconscious guard, I don the security garb and make my way into the VIP section. 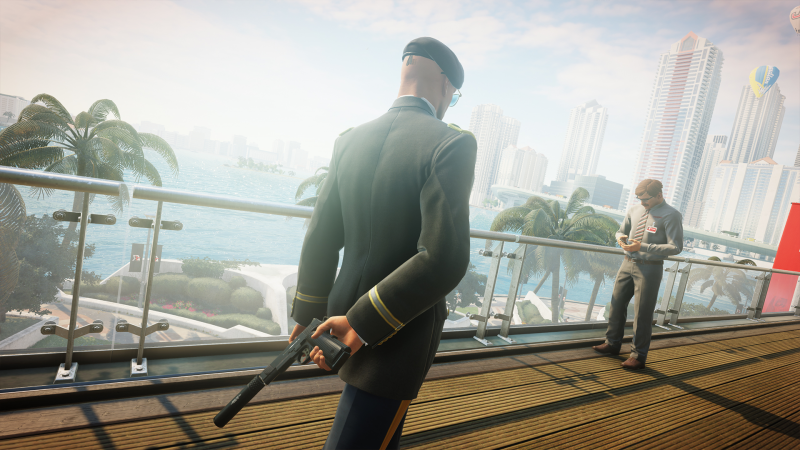 At the VIP section, I hear that one of the mechanics on Knox's pit crew is planning to quit. Diana quickly has me tail him through a crowd, which is where one of Hitman's new features comes into play. Blending into crowds is now an explicit part of the game, and lowers the awareness of suspicious people around you.

As I blend in with the crowd, I realize one of Hitman's guiding principles is still in place: In order for the mechanic to make his next move, I need to "trigger" his next action by walking near him, instead of simply waiting for him go along his route. While this isn't a dealbreaker, it hampers my immersion in the world, and I had hoped the full sequel would have meant a more clockwork world, with every character acting independently of Agent 47.

I roll with it, however, and begin tailing the mechanic at a distance by cutting through crowds interspersed at the outside VIP section. I stop to reassess after he decides to start sipping wine at the bar. As is often the case in Hitman, it's time to poison his drink. My guise as security hasn't been compromised, so I'm free to head into the kitchen to wait for a waiter to enter the supply room. As soon as they enter, I chuck a kitchen knife at their face and take their outfit. Of course, the rat poison I need is right behind me.

Back at the bar, I get to see another tweak in action: I can now choose to keep my head down as a waiter while I wait for the mechanic to leave his drink unattended, which lowers my chances of being spotted by another waiter who might know better than to let an overly stoic guy with a barcode tattoo tend bar. After a few seconds, I see my chance and slip the poison in the mechanic's drink, then follow him to the bathroom.

Before I subdue him, IO tells me to watch out for people and mirrors. If someone happens to be looking at a mirror with your refelction, it'll count as them seeing you. Luckily, the bathroom is empty, and I'm free to leave the unconscious mechanic to his bodily functions. 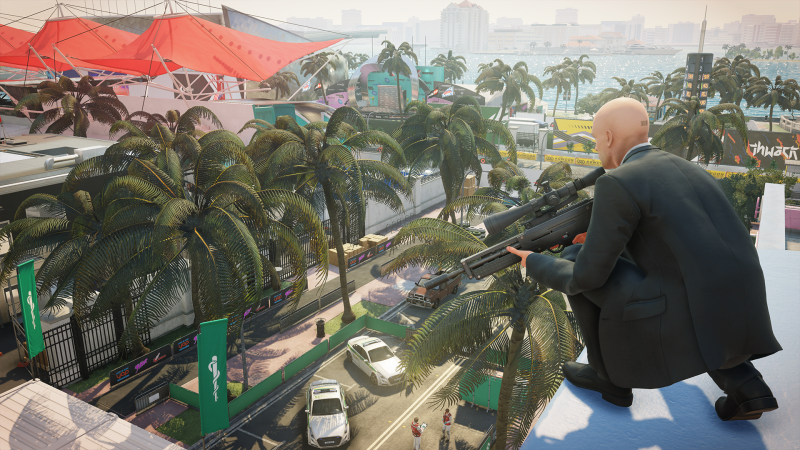 While wearing the mechanic's outfit, I head to the pit near the race track. The pit crew leader doesn't skip a beat and immediately orientes me on the finer points of being a crew member as though I'd just been hired. He tells me to get out on the track and maintain Knox's car. With the explosive still on me, it's all too easy to sabotage the whole affair. While I went with the explosive, IO tells me there are at least two more ways to end the scenario.

Finally, to confirm my kill, I stop by the racetrack to get a better few of the finale. As Knox races past me, I detonate the explosive, ending the demo. This is a fairly standard Hitman anecdote, but that's indicative of Hitman 2's approach: The original has created so many player-made stories worth telling that it's hard to justify upending too much of the formula.

If anything, the most important thing Hitman 2 changes is the release schedule: Rather than release one scenario every month or so, players will have access to the entire game at once when the game releases on November 13, letting them play out Agent 47's next few mission on their own. IO assures me its dedicated to supporting Hitman 2 past release, however, and confirmed bonus missions like escalation contracts and elusive targets will make a return and will be delivered on a similar schedule as before.

They also confirmed Agent 47's briefcase is back, letting you stow just about any item inside. You can also leave the briefcase lying around, and it will be noticed by passersby, which could screw up your entire plan or play right into your hand, depending on how you use it.

These details are all great, but I wonder why Hitman 2 is a wholly separate game from the first, instead of a continuation of the world of assassination established in the first Hitman. Still, if Miami is at all indicative of the expansive playgrounds Hitman 2 will let players go wild in, it should deliver the same kind of sly-yet-goofy thrills fans have become so enamored with in the last few years.