Rocket League Is The Right Game For Right Now

Rocket League needs no introduction. It’s car soccer. You don’t need to know much more than that, other than it’s one of the most popular competitive games out there, and a car flying through the air is an awesome spectacle. While I can’t say enough good things about Rocket League, I never really got into it. I played a few matches here and there, went pro in it for an evening, and then moved on to other games. My competitive gaming diet usually needs guns. Call of Duty, Overwatch, Battlefield, the list goes on and on.

Since 2016, Overwatch has been THE game for my competitive needs. While I can’t say I play it every night, it’s not a stretch to say I play it most nights. I have a great group of friends who join me for almost every session. I look forward to the competition we face and the bonding between us. They are the nicest group of guys I know, and while we get along great, once an Overwatch match starts, the competitive juices take over and our lively banter becomes intense and focused. There’s some finger pointing that comes with it, but we’re usually a well-oiled and polite machine.

I don’t recall exactly when our lives were upended by the COVID-19 pandemic (it now feels like forever ago), but I remember thinking we would be getting in a lot more Overwatch since we'd all be at home. As the days began to bleed together, the exact opposite happened. My crew abandoned Overwatch completely.  We moved to Rocket League. It started out as somewhat of a joke in an effort to play something new together, but each person who tried it ended up becoming hooked. Rocket League has all of the same competitive staples as Overwatch, and I'm sure it's intense for people who take it seriously, but for us, it delivers nights filled with stress-free laughter. 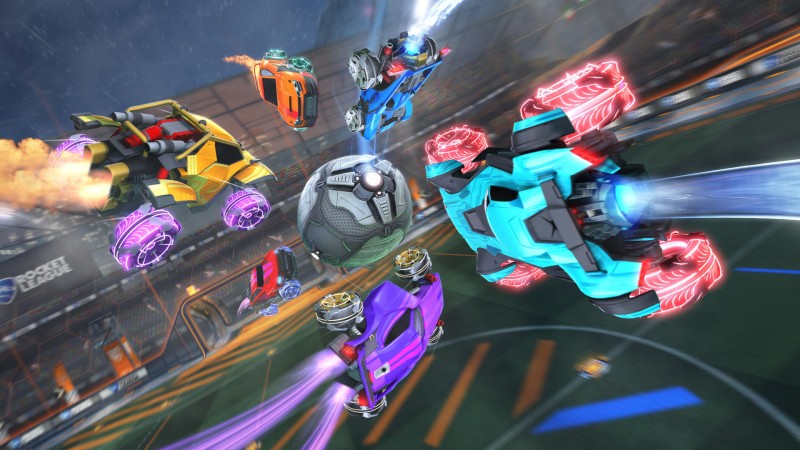 Don't get me wrong, we aren't throwing matches or playing it just for kicks. We want to win, and matches that go into overtime are intense, but we never get worked up like we do when we play Overwatch. We care about our season rank in Overwatch and a string of losses can be depressing, but we aren't worried about anything like that in Rocket League. If someone misses a gimme goal, even in overtime, they are jokingly mocked and everyone laughs. As of this writing, and probably through the entirety of the lockdown, we have no interest in rising through Rocket League's competitive ranks. We are embracing the role of amateurs. This game has become our hangout zone and every second of it is fun.

Part of what makes Rocket League sing right now is it's mostly violence free – a nice change of pace. The game world is colorful, the music is upbeat, and it kinda reminds me of going outside to play wiffle ball with friends. Developers Psyonix and Panic Button Games have done a tremendous job of building out a game filled with variety. Whether we’re playing 2v2, the standard 3v3, or 4v4, we’re having a blast. The soccer action scales well for all of these avenues.

We especially enjoyed the chaos that came from the new Heatseeker Mode, which sadly ended this last weekend. In this mode, the ball automatically seeks the opposition’s net whenever it is touched. Every time it’s hit by a player or bounces off of the backboard it gains speed. Since every shot is on point, goals are scored quickly, and if they aren't, you're likely performing or watching a miraculous save. The first team to score seven points wins. This mode is awesome and needs to come back. I had tears of laughter rolling down my cheeks in a few of our matches.

I don’t know how long we’ll stick with Rocket League, but it’s the right game for right now, and is a unique ray of light in the violence-filled competitive landscape. Matches are fast, matchmaking has been great for pairing skill levels, and learning how to fly in a car has been an incredible experience. Last week I talked about how the pandemic is changing my gaming tastes and habits – mostly in moving away from stressful experiences for more lighthearted entertainment. Rocket League fits that bill perfectly. If you're game, let's play a few matches together!