Clash Royale has become a part of my morning routine. I wake up, get ready for the day, grab a tasty Starbucks beverage, and play a few matches of Clash Royale before heading to work. I've been hooked on this competitive game for the last three years, and now, thanks to Supercell's latest update, I find myself playing it more than ever.

Drawing heavy inspiration from Fortnite, Clash Royale now offers seasonal play. Over the span of 35 days, the first season (dubbed "The Flood") introduces a new card, arena, and, wait for it, a battle pass (called Pass Royale) that players can purchase to earn cool new things like tower skins, additional chests, and trade tokens. It also delivers the ability to queue up chests (yeah, I agree that should be free in the base game), and unlimited continues in challenge events.

Yes, it stinks that I now have to spend $4.99 every 35 days to get the game's most desirable loot, but I mostly appreciate the update since I have something new to play for. The items of note are dangled in front of me like a carrot on a stick, and I just have to play extensively to get them. With the Pass Royale, Supercell is clearly targeting a player like me, who has maxed out all of the cards in my deck and hasn't had to spend money on the game for a good year.

I'm five dollars poorer, but also find myself playing the game roughly three times more than before just to make sure I finish every tier of the Pass Royale before the season ends. The ultimate prize is the tower skin, which turns my princess towers into shark tanks. It's a little reward that I'll see every time I boot up the game. For someone who plays the game religiously, that's worth the five bucks.

Will I spend the money every time a new season starts? Probably, but I'm telling myself I'll first look to see if I think the rewards are worth it. To be honest though, it won't take much to twist my arm. I'd probably buy the season pass if the only reward was a balloon getting added to my king's tower. Yes, I'm a sucker.

Supercell has done a tremendous job supporting Clash Royale, and while its store is loaded with expensive cards that lower level players will probably consider buying, the free-to-play mechanics haven't been intrusive for a high-level player like me. The season pass is the most up front Supercell has been in asking players to spend money. It's optional, but I think it delivers a hell of a value for people who boot the game up every day. 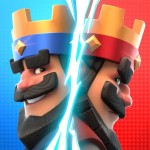