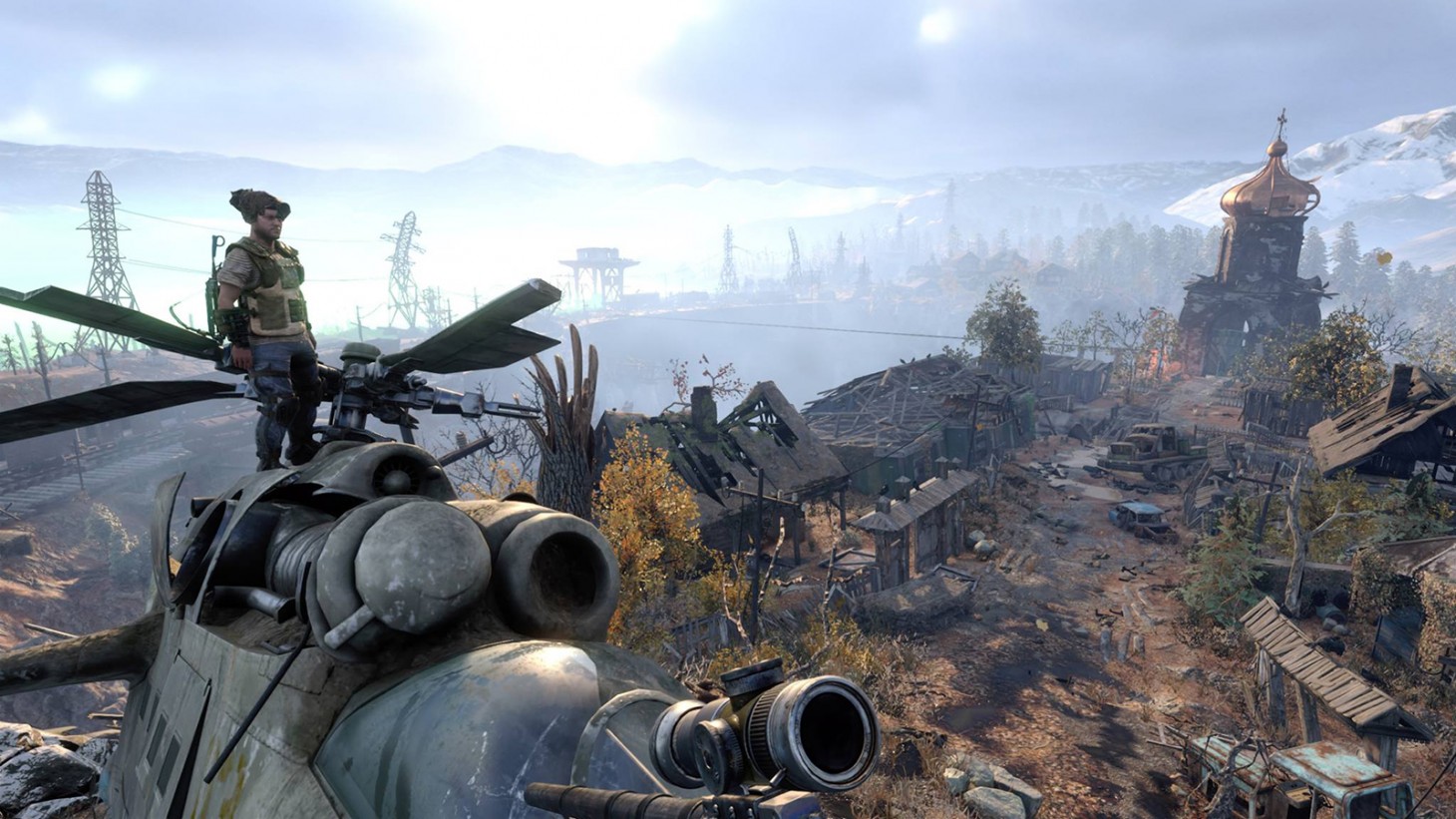 Metro Is Gaming's Most Interesting Post-Apocalypse

When Fallout 76 released last year, I gave it a fair shot. Like many, I tuned out of the game after playing a few hours. However, I didn’t quit because of bugs or because I thought the gameplay was bad. Instead, I was just tired of Fallout’s take on the end of the world. After several games of unclimbable rocky terrain, bombed out buildings filled with burnt books and skeletons, and sassy writing, I was just exhausted of the setup. Sure, Fallout’s gameplay has shifted many times over the past two decades, but its tone and view of people in general hasn’t.

My thoughts kept drifting back to Fallout this past week while playing Metro Exodus, the third installment in a series of games about people living in Moscow’s subway after a nuclear doomsday covers the city in fatal levels of radiation. The first two games followed the journey of Artyom, a citizen of the underground society who gets caught up in wars between the underground factions that have cropped up over the years, including a “Fourth Reich” and the various remnants of Russia’s government. If you weren’t navigating tunnels filled with Nazis that wanted to slit your throat, you were on the surface, wandering the streets of the city fending off predatory mutants. The third game, Exodus, takes Artyom and a group of loved ones across the open terrain of Russia in a train as they search for a new life, hopefully escaping the darkness of the metro at last.

What I’ve always loved about Metro is its commitment to its fiction, keeping true to the tone of its setting as well as supporting that fiction through novel gameplay mechanics. In the first two games, bullets are not just ammo but also function as currency, letting you trade them for weapons or precious health kits. This means you have to approach every combat encounter carefully. Can you really afford to go gung-ho when every bullet in your arsenal is literally a dollar? You also have to maintain your radiation-blocking gas mask with filters that deteriorate over time, meaning you're constantly searching them out in the darkest parts of tunnels or trading for them. If your gas mask gets damaged, you have to manually tape over the crack in a darkly humorous display of DIYism. As Metro takes place in dark tunnels, you also have a headlamp you have to charge constantly as you proceed through the first two games. 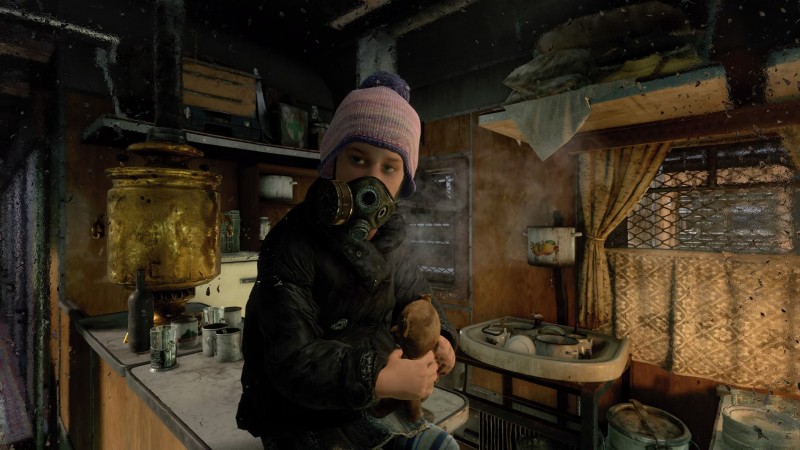 A lot of this might sound like a chore. However, Metro’s flirtations with realism result in something tense and fascinating. Some of the fondest moments in gaming I’ve had over the past few years have occurred in Metro’s tunnels, where I crawled through ventilation shafts and stepped through corpse-strewed stations with only a few throwing knives, a broken mask, and a pistol with two rounds in it to keep me alive. The tension is palpable, especially when your headlamp starts to flicker and you have to render yourself defenseless to recharge it for a few seconds.

Metro’s approach to presenting its version of the apocalypse through narrative is equally as fascinating as the gameplay. Though Fallout, Rage, and its ilk have conversational NPCs in order to inject personality into a dead world, a lot of them are surprisingly stationary or move and stick to their schedules in slightly robotic fashion (like the inhabitants of Fallout 3’s Rivet City, always either sleeping in their bunks or taking up their post in the market). However, Metro’s embrace of Half-Life’s "Make The Player The Camera" storytelling tenants goes a long way in making me feel a part of that world.

The various stations of Metro are dark and cramped, with families often sleeping in grungy cardboard forts as barrel fires blaze next to them. In spite of that dinginess, hope pervades. Children run around, picking on one another and having fun, while men and women drink and try to find a little bit of light in the dark. As you walk through these stations, you can take in these scenes or you can rush past them, obsessed with the urgency of your quest to save the metro. However, even if you do that, the story goes to great lengths to build camaraderie within its core characters. 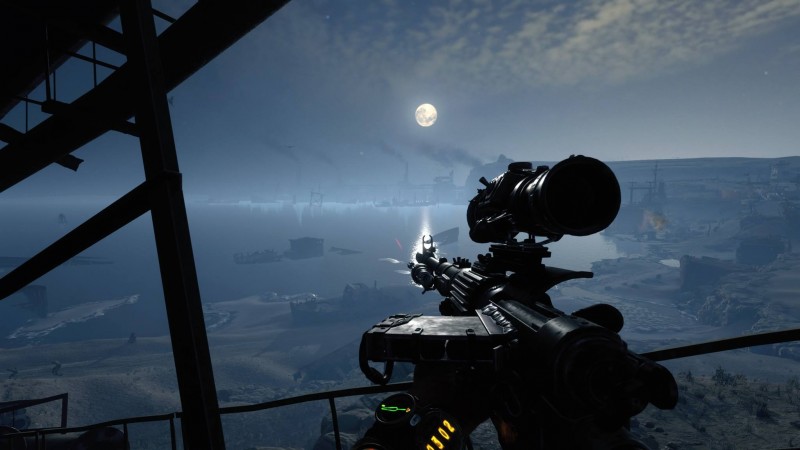 Shortly after the opening hours of the Metro 2033, Artyom meets Miller, the commander of the Spartan Order, a squad of elite troops dedicated to protecting the people of the metro. The two don’t hit it off at all. However, as the series goes on, Artyom and Miller form a relationship of begrudging respect, especially after Artyom falls in love with Anna, Miller’s daughter. Likewise, The Spartan Order comes to respect Artyom after seeing his bravery on multiple occasions. The Spartan Order's cast of characters comes to depend on one another and bask in their collective emotional warmth to stay alive in even the bleakest times. Though there are many aspects of Metro’s narrative and voice-acting (or lack thereof) that are stilted, it gets the most important thing right: the series gives us people stranded in the darkness seeking a way out, people who are believable and worth rooting for. Exodus charts the path to that escape.

I was skeptical when 4A Games revealed that Exodus was going to be more open-worldish. After all, the things I liked about Metro were that it was different from the majority of post-apocalyptic games, rejecting barren sprawl and fetch quests for tight action-packed gameplay and pinpoint narrative focus. I worried that the series might finally be lost to the trend of generator-spewed emergent stories instead of continuing to embrace its own identity. Luckily that was not the case. Yes, Exodus is bigger, but the things that make Metro so lovably unique are still retained and even blown-out. 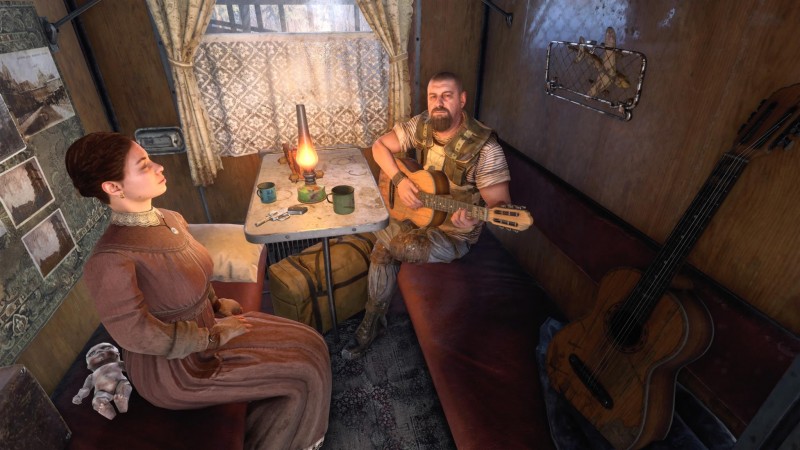 Exodus bears down on the character-driven storytelling from the previous games, taking a page from Wolfenstein’s book and creating a hub space where you can check in on your characters and listen to them pour forth their anxieties and hopes about the world while you sit back and listen. These moments are basically the glue of the entire Exodus experience, letting you really become invested in who these people are. Will Stepan’s affection for hitchhiker Katya result in something other than friendship? Will Miller get over his resentment of you leading everyone out of Moscow? Small dramas and moments of levity unfold when you’re in the hub, reminding you that there is a reason for you to be doing whatever is you’re doing when you’re out and about in Exodus’ regions.

Speaking of the regions, they’re rad. A big problem with post-apocalyptic games is that they tend to all look the same: barren, rocky environments filled with dilapidated houses.  This is not always true, of course. The Last of Us, another game that separates its levels into seasons, also has rich and varied environments. However, every one of Exodus’ maps feels distinct from one another in a way that’s exciting. It’s not just a matter of the desert locale being a change of pace from the wintery river locale. Every location has its own faction that you have to contend with, like the weirdos who worship a fish god. These folks are pretty harmless in the long run, and how you handle them – through brute force or evasion – will change your relationship with everyone else in the region as well. Every location responds to your actions in a way that feels fluid. If you develop a reputation for sparing people, more enemies will surrender to you during combat. If you’re a monster, that might have consequences, from one of your crew members saying something in disapproval to one of them paying the price for your bloodthirst.

Metro Exodus feels alive in a way that most of its post-apocalyptic siblings don’t, and that’s because it doesn’t settle for giving a player a post-apocalyptic sandbox. Metro instead crafts its own tale about despair and hope while giving players ample flexibility to find entertainment within that space. The world might be dingy and overcast, but its heart beats with the kind of excitement, innovation, and heartfelt storytelling that more games need to have.

For more on Metro Exodus, check out our review for the game as well as some tips to help you survive the journey.