Destiny 2: Festival Of The Lost 2018 Detailed 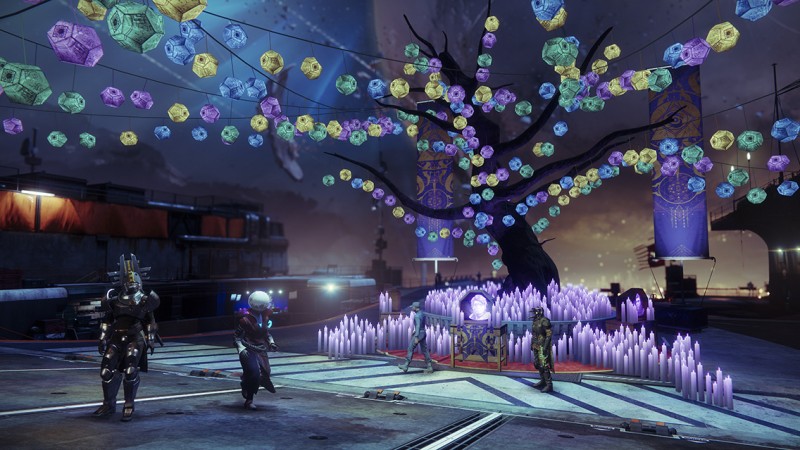 Bungie today offered details about what Guardians can expect to discover in this year’s Festival of the Lost, which is set to run from October 16 to November 6. While the event has yet to begin, the initial announcement suggests that the event is significantly more robust and feature-rich than some players have come to expect.

In addition to an engram-themed redecoration of the Tower, there are several discrete activities and collectibles to pursue as well. The character Eva Levante used to be the centerpiece character of the Festival, but she has been missing since the events of Destiny 2’s core game. Instead, Shipwright Amanda Holliday will step up as the main vendor for this year’s event. She will offer daily bounties that reward fragmented souls – this new currency, in turn, can be used to purchase new masks, as well as a new legendary auto rifle called Horror Story.

A new activity area is also opening up called the Haunted Forest. Inside, players attack enemies and see how deep into the area they can reach in 15 minutes, with the challenges becoming more difficult the further in you go. Bungie doesn’t offer a lot of additional detail about this new locale and activity, so we don’t know if the Haunted Forest will come along with any specific loot. The Haunted Forest is available to play solo, with a premade team, or with matchmaking – a fact that will come as welcome news to many players frustrated by the absence of matchmaking for modes like Escalation Protocol and Blind Well.

Festival of the Lost will also serve as the launching ground for a multi-week murder mystery, beginning on October 30. Master Ives, the Cryptarch of the Vestian Outpost from the original Destiny, has been killed, and players must figure out who did the deed. The connected quest line includes a new powerful engram to be earned each week, so it’s one more way to level up. We clarified with Bungie, and while the Festival of the Lost will only run until November 6, the new powerful engram and its weekly reward will continue on past that conclusion date for a few additional weeks.

As players level up throughout the Festival of the Lost, you’ll also gain a new Eververse Ephemeral Engram with each level passed, along with the standard Steadfast Engram you always get. The Ephemeral Engram seems to feature a number of new rewards, including ships, Ghost shells, and emotes. This new engram type can also be purchased using real money. Tess will also sell a selection of specific items from the event for direct purchase using Bright Dust.

Festival of the Lost will be available to all Destiny 2 players (regardless of expansions owned), and on all its platforms - PS4, Xbox One, and PC.