Are you a fan of arcade-style wrasslin’ games and have become disenchanted with the simulation gameplay of WWE 2K? Look towards the aisle because here comes Action Arcade Wrestling. This non-licensed title emulates classics such as WWF Superstars and Wrestlemania: The Arcade Game by going back to basics. The drama unfolds on a 2D playing field with grappling mechanics that are easy for anyone to pick up while also having a fair amount of depth to sink your teeth into. Created by only a couple of designers, AAW isn’t chasing the title of the biggest and best grappler around. Rather, it offers a small but tightly-made throwback to the wrestling games of yesteryear.

AAW features a roster of original wrestlers from a robot-like sentry sporting Wolverine claws to a lizard man covered in glowing scales. That wackiness extends to the moveset; performers can shoot face-melting laser beams and throw flaming jabs as easily as executing a wristlock or dropkick. There are even power-ups that grant special bonuses. If you’re thinking to yourself, “That sounds fun, but I want to play with wrestlers I recognize,” then fear not! A creation app gives players the freedom to design and/or import familiar superstars into the game. These can range from real-life stars such as Roman Reigns and Kenny Omega to fictional main-eventers like Captain America and Kratos.

To see what AAW has to offer, two of Game Informer’s biggest wrestling nerds, Marcus Stewart and John Carson, dissect an over-the-top singles match, download some fan-made superstars, and then pit those creations against one another in an all-star battle royal. If Action Arcade Wrestling looks up your alley, you can buy it right now on PlayStation 4, Xbox One, and PC. A Switch version is scheduled to arrive later this year as well.

Thanks for watching, and be sure to visit the Game Informer YouTube channel for more episodes of New Gameplay Today. We’ve recently taken looks at Lost Judgment and Boyfriend Dungeon. You can also catch up on other fun video series such as Replay and The Game Informer Show. 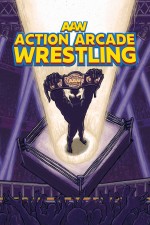