Claire De Lune is a sci-fi narrative adventure game by Tactic Studios that begins with players soaring across the stars. As John, you’re exploring through space alongside your daughter, Claire, and their AI companion/pilot, Arturo. Everything seems largely peachy until an unknown force violently pulls your ship towards a nearby planet. Sensing the worst, you jettison Claire to the mysterious world in an escape pod while you ride their ship down to the surface.

After surviving the crash-landing, you must now locate Claire’s life pod while also figuring out what caused the disaster in the first place. John is armed with his trusty nanogun, a device that spawns large cubes that can be used for climbing. The “weapon” can also create bounce pads for bounding over obstacles. These mechanics, as well as others, may sound simple but Claire De Lune’s environmental puzzle-solving challenges players to make inventive use of the nanogun to safely bypass hostile wildlife, traverse bodies of acidic goo, and other alien hazards. Along the way you’ll engage in various hacking puzzles, explore abandoned research facilities, and engage in both stealth and combat scenarios.

Join myself and Tactics Studio founder Jesse Attard as we explore Claire De Lune’s opening moments and show off its unique spin on exploration. If you like what you see, you’ll be happy to know that the game is available beginning today on PC (on both Steam and the Epic Games Store).

If you enjoy this video, be sure to visit and subscribe to Game Informer’s YouTube channel for more video features. That includes previous installments of New Gameplay Today because who doesn’t want to get a heads up on the coolest-looking games, both big and small? Recent episodes have taken fun looks at upcoming games such as The Great Ace Attorney Chronicles, OlliOlli World, and Pokémon Unite. 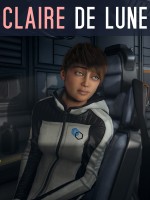