Ender Lilies: Quietus of the Knights is an upcoming 2D action RPG set within the destroyed Kingdom of End. Escorted by the spirit of a brave knight, the game's protagonist Lily uncovers the mysteries of her destroyed kingdom, during which she'll explore ruined churches, castles, submerged forests, and shadowy underground environments.

Join Jeff Cork, Dan Tack, and Alex Van Aken for a brand new episode of New Gameplay Today, wherein they conquer the game's first boss fight. You won't have to wait much longer if you're interested in playing Binary Haze Interactive's 2D Metroidvania, as Ender Lilies: Quietus of the Knights releases in Steam Early Access on January 21. 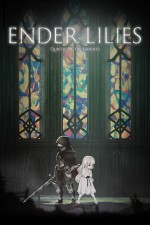