Ubisoft’s upcoming space game Starlink: Battle for Atlas is coming to a variety of consoles, but the publisher is doing something extra special on Switch. Nintendo fans will be able to play as Star Fox Fox McCloud himself, and take on missions while flying the Arwing. What would that possibly look like? Well, in this very special episode of New Gameplay Today, we answer that question as we take down a couple of quick missions.

Star Fox Fox McCloud wasn’t in this build, but he loaned us the keys to one of the game’s other pilots, a guy named Mason. I modified the weapons a bit, so we’re not looking at a completely stock Arwing. It gets the job done, as you can see. Jeff Cork is joined by Kyle Hilliard and the Bens (Hanson and Reeves!), who were with me in Nintendo’s E3 booth, where we recorded the footage.

Look for Starlink: Battle for Atlas on PlayStation 4, Xbox One, and the Switch on October 16. 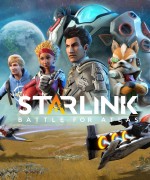