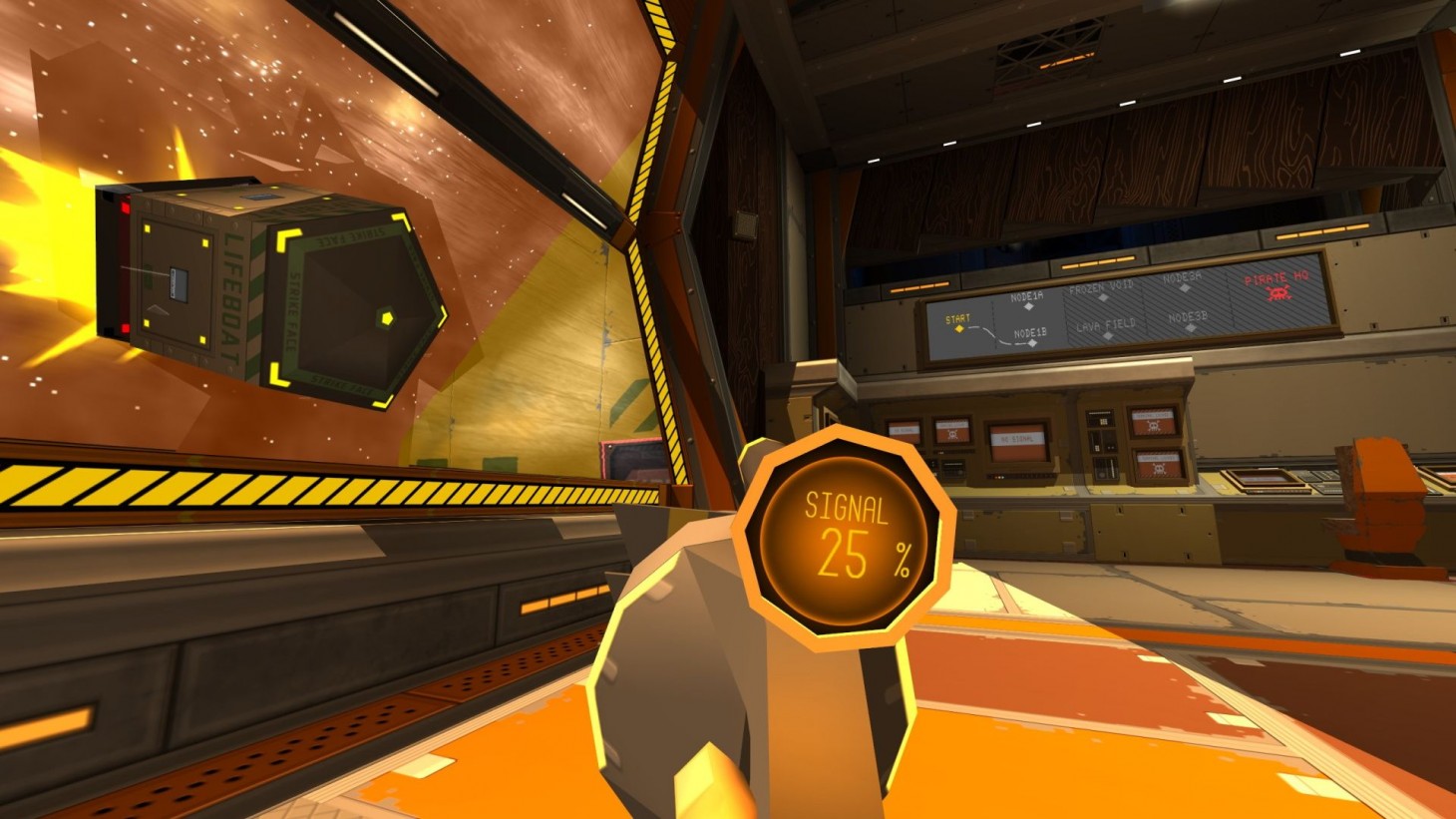 Interview: Skin Deep Offers A Weird FPS Experience Where Cats Are In Charge

What do you get when you have a team that just really wants to make a really weird shooter? A really weird shooter where cats are in charge. That's exactly what the team over at Blendo Games is doing, under the publishing umbrella of Annapurna Interactive, with its newest title called Skin Deep. There's sneezing, there is getting weird stuff stuck to the bottom of your feet, and there is the need to survive while trying to escape a group of pirates after being frozen on a cargo ship by an insurance firm run by ... cats. Yeah.

We sat down with Brendon Chung, the head of Blendo Games, to talk more about the studio's latest title. Coming off of creating some wild experiences like Atom Zombie Smasher, Thirty Flights of Loving, and more, Skin Deep fits right into the growing library of oddball experiences that are just about having fun. Not every game has to have a billion subplots, not everything needs to be super complicated to be enjoyed. With Skin Deep, it's about having fun, the thrill of a shootout, and not taking life too seriously.

So what is Skin Deep? It's a world where insurance corporations keep valuables safe, including people, they free you and store you into cargo starships. That's you. You're frozen. Everything is fine and dandy until a group of pirates decide to board the ship and throw everything into mayhem. It's up to you as the player to unthaw and throw yourself into the chaos using weapons and good 'ol fashioned stealth to try to survive in this sandbox. It's goofy but also challenging, providing the perfect blend of gameplay styles to make Skin Deep stand out.

So where does inspiration like this come from? "I grew up playing a lot of FPS games," Chung tells us. "I got my start making a game by doing maps for like Doom, Quake, Half-Life - things like that. So I've done a lot of FPS stuff, story games like Gravity Bone, but I haven't done anything where you just straight-up shoot people. A traditional FPS game and I love this genre, so I wanted to make it, and I did."

Chung continues, saying, "For me, I am a big Far Cry 2 booster, I just like how games like that play. I kept thinking this is like, playing an FPS for the first time. This is great stuff. So I kind of wanted to play with different ideas of like, what FPS could do like what I've always wanted to see an FPS and like, what are things we could do with a player body? And what are the things that a player's body can be and do and smell like? I just wanted to play with those ideas with questions like 'What are they? What do they felt like this?'"

He also adds that there is one additional component that he hopes players enjoy: "Oh, you can smell those games, which we're very proud of. We have tech that lets you climb into a trash chute and get ejected into outer space. And then when you kind of float out of space and climb back into the ship, there's a big message it says you are smelly, and then you will waft out green smell clouds from your body. And bad guys will smell you and they will track you down by your green smell clouds. And we have different systems for getting yourself clean again. So we're very excited to let people play with this."

The smell component is just one of the many oddities this game has, including the "sneeze system" that builds up when crawling through ventilation shops in an effort to play around with all of the things a body can do in-game. It's pretty interesting, and definitely a unique venture! Check it out in the trailer below to see for yourself how it all works:

With Annapurna, as a publisher, doing so much to increase visibility for indies in the gaming space, I wanted to find out exactly how Chung feels about the current spotlight given to independent studios. "I used to work in the AAA space for about five years," he tells Game Informer.  "And then in 2010, I went independent. And I think from my experience, I always feel that whenever I release anything, is just a giant crapshoot. I think sometimes things catch on, sometimes things don't. Like, sometimes I'll play a game that's like, really, really good. And then I'll read a report later that, like, this game didn't really sell very well. I'm like, what:? How did this happen? And I'm gonna be honest, I don't fully understand. I mean, I think part of it is just that there are just so many games out there. And, there's so much free stuff now.  I couldn't play this, this incredibly well-made game that's totally free, and I don't need to pay any money for it."

He adds, "There are a lot of new things happening. There are lots of like, free stuff for game pass stuff or whatever. So I think there's definitely a lot of things to figure out. I think my general approach to making stuff is that some things catch on, some things don't. And because there's just so much stuff out there. Sometimes things just kind of get lost in the wind. I think we're making something really cool. So I'm hoping I think the best I can hope for usually is like I hope this finds the audience of people that like this kind of thing. That was something like funny and lighter and like plays with ideas. But I think beyond that there are some things are sometimes like out of our control, which is a bummer, but I don't know."

We don't mean to alarm you, dear reader, but games are - in fact - hard to make. I know! Crazy, right? But they are! And that's something Chung talks about, as well. "I think that one thing that sometimes doesn't always get through [to people] is that games are hard to make and that when you want to make a game, you have to create each bit, you have to make all the parts of it. I think it can sometimes feel to some people that like, oh, you think I could just make this game in three months and it actually will take you two years, or whatever. But I think sometimes it's hard to understand that. It's not just like putting a puzzle where you put the pieces down, it's more of you don't know where the straight line goes, if it's even a straight line. It's more like a very, very squiggly line of like, 'ok, let's try this.' So it's a lot of different ideas that you first have to try and fail. And then you find the thing that works. And I think when people say yeah, I can make this in three months they might not be wrong, but coming up with all of these ideas and making them work takes a lot longer than that."

Skin Deep will be on Steam only, though future platform releases are being considered.