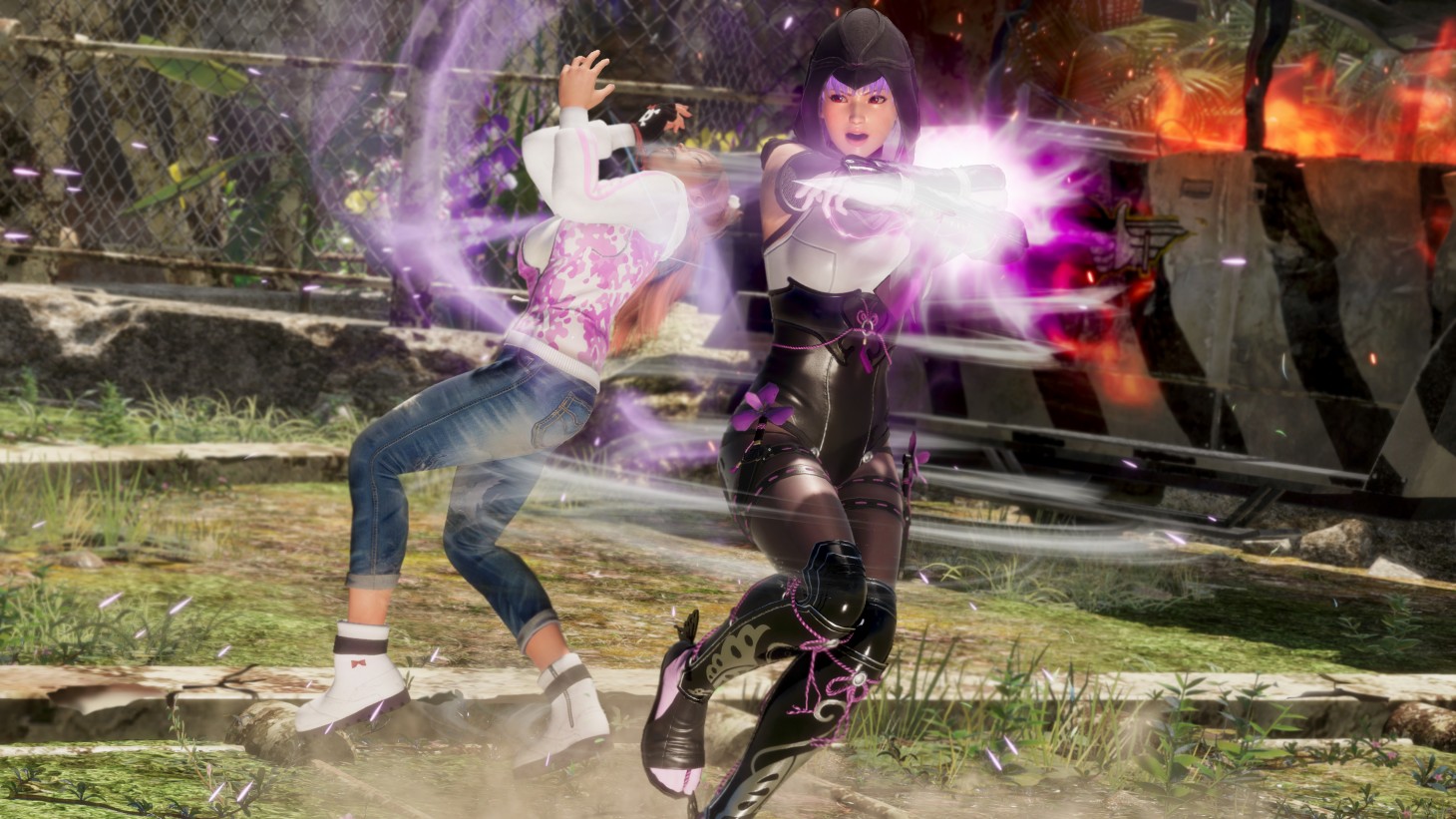 Coming off Dead or Alive 5 Last Round, the series is back with a brand-new numbered entry. Since the last game released in 2015, Koei Tecmo has been investigating what fans want, and have been trying to get the series to pick up steam on the competitive scene. With all that’s changed with fighting games over the years, we sat down with director Yohei Shimbori to see what’s new and what’s returning for the long-running series alongside his character picks for beginners and veterans.

For people who haven’t been in the know, what are some of the key differences in Dead or Alive 6 compared to 5?

There are a couple of differences... actually more than a couple. The first area would be the visuals aspect. We’ve changed the game engine, and the theme for this game is “intense fighting game entertainment.” With the new game engine, we’re able to show people getting bruised and the scratches on them. We also made improvements to the stages as well, so players can get that feeling of [immersion] and really get in there with the action. I think visually people will really be able to see the evolution of the game.

Then the next [difference] would be within the fighting system. Compared to Dead or Alive 5 Last Round, the game is much easier to get into for people who are completely new to fighting games. At the same time, for more experienced players we’ve added new moves that they’ll find interesting. There are two key points to this. The first is that there’s a special button, which is the shoulder button. Just by pressing it, even people new to the game will be able to perform really cool moves; you can do something called fatal rush. The second area is in the break gauge, and when it fills up you can do a special move called the great blow. Visually, I think people can see that if they fill up the gauge, it means they can probably do something cool.

Obviously, this [game] is a good entry point but also you probably don’t want to just press one button; your human [instinct] is to want to press more buttons. From that, people will think, “Okay, I’ll able to do this move with one button, but what if I press other buttons?’ I think through that people will be able to learn these other [more complex] moves and realize, “Hey, this really is a proper fighting game.”

Diego is the only new character revealed so far. What are your favorite things about him?

Diego’s backstory is that he’s a street fighter. He fights in the back alleyways of New York, and he does that to earn money. Even though he’s a really rough fighter, he is actually very kind. His mother is weak and in order to really help her out with money, he uses the strength that he’s been born with. He’s like a street champ. As you can see with his stats, his throws and his power are really strong. You can really push your opponent into the corner with him.

Back in August at Evo, where we revealed him, we had a lot of players try him out and out of all the characters people played he was one of the most popular ones.

You’ve made this entry a good starting point for newcomers, but what are you hoping to bring to the competitive fighting scene with it?

I think some people sort of look at Dead or Alive series and don’t think it’s much of a competitive fighting game. I think people misunderstand it; it really is a proper competitive fighting game. We’ve actually done tournaments for Dead or Alive 5 Last Round, so really we want to bring more of that forward. With the addition of the new systems for 6, I think it really allows players to do deeper combos and have more options to them. It gives you more freedom. With pro players, they can really find their own way to excel or style to fight. We also have the break gauge, which is something you can see and anticipate that something exciting is going to happen, whether you’re just someone who is watching the tournament or playing the tournament.

I’d probably recommend Kasumi for beginners. As the main character of the series, she has a lot of different moves. Even if you’re just button mashing, you can perform a lot of her moves. She’s also very fast so her hits are more likely to land. People will find her easy to use and that they’ll be able to do really cool things with her. Diego might be another one for beginners because his move sets are simple.

For experienced players, [I’d recommend] Bayman. He’s a hold specialist. He’s not very fast, but he can do a lot of damage.  When using him, you have to be able to [predict] what your opponent will do. Actually, at Evo, we did a tournament for Dead or Alive 5 Last Round and the winner of it used Bayman. 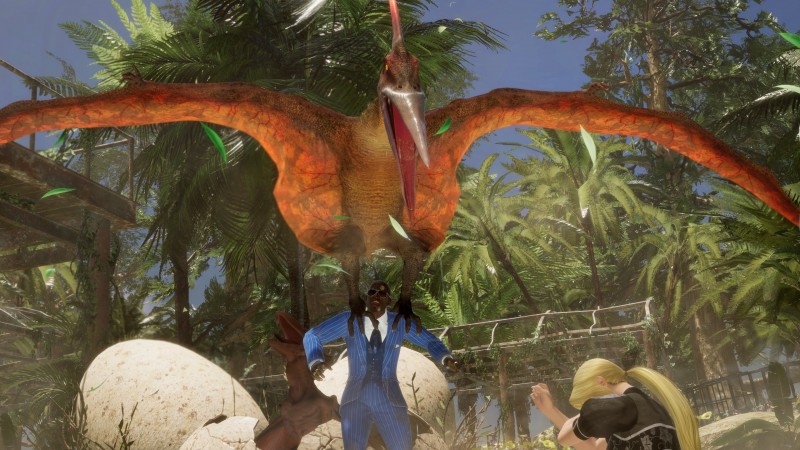 The fighting game scene is certainly making a big comeback with tons of games on the horizon, such as Soulcalibur VI, Kill la Kill, and Jump Force. What makes Dead or Alive 6 stand out from the competition?

In the past Dead or Alive has really focused on its female characters, but so far the roster looks pretty even between men and women. I know in the past you had the age option that changed the breast jiggle. Is the series continuing to embrace that, or is it changing from that?

In terms of the number of male versus female characters, this is only what we’ve shown so far, but in the end there will probably be more female characters. This is because we’ve done some marketing research and we found that the series’ fans are really looking forward to female characters. Part of our job is to please the fans so it will be [tilted] toward women.

In terms of the chest movement, it’s something that’s been in the game since Dead or Alive 1, but there are some outfits in the game where there isn’t any movement. [Shimbori then shows us two different costumes for Kasumi, one made of tougher, leather-like material and her traditional costume, made of cloth, noting it wouldn’t be realistic for the former to have much movement.]

Depending on the outfit itself and the material, whether it’s solid material or soft cloth, it will be different. We look at the way the body moves, not just the breasts, but other elements, too. We are really looking to show more natural body movement. With this current build now, it’s probably only 70 percent implemented into the way it’s going to be in the end. It’s not something that we’re trying to put in people’s faces, ‘Oh, look at the breast movements!’ or anything. However, it is an element of the game that fans of the series do tend to be geared toward. We’re working within our fan expectations, and we do want to dispel any rumors that there is no movement whatsoever. That’s been a misunderstanding.

We also hope people don’t just focus on a specific body part because we are putting a lot of effort into the entire character, right down to facial animations, bruises, scratches, and sweat.

Dead or Alive 5: Last Round had a lot of DLC, sometimes becoming confusing on what you needed to purchase on the store. Can somebody buy this game off the shelf and be ready to play?

Basically, with Dead or Alive 6, you can just buy the game and play it straight out of the package, but we do have characters for the pre-order bonus (Nyotengu) and the digital deluxe edition (Phase 4) if you want these two extra characters.