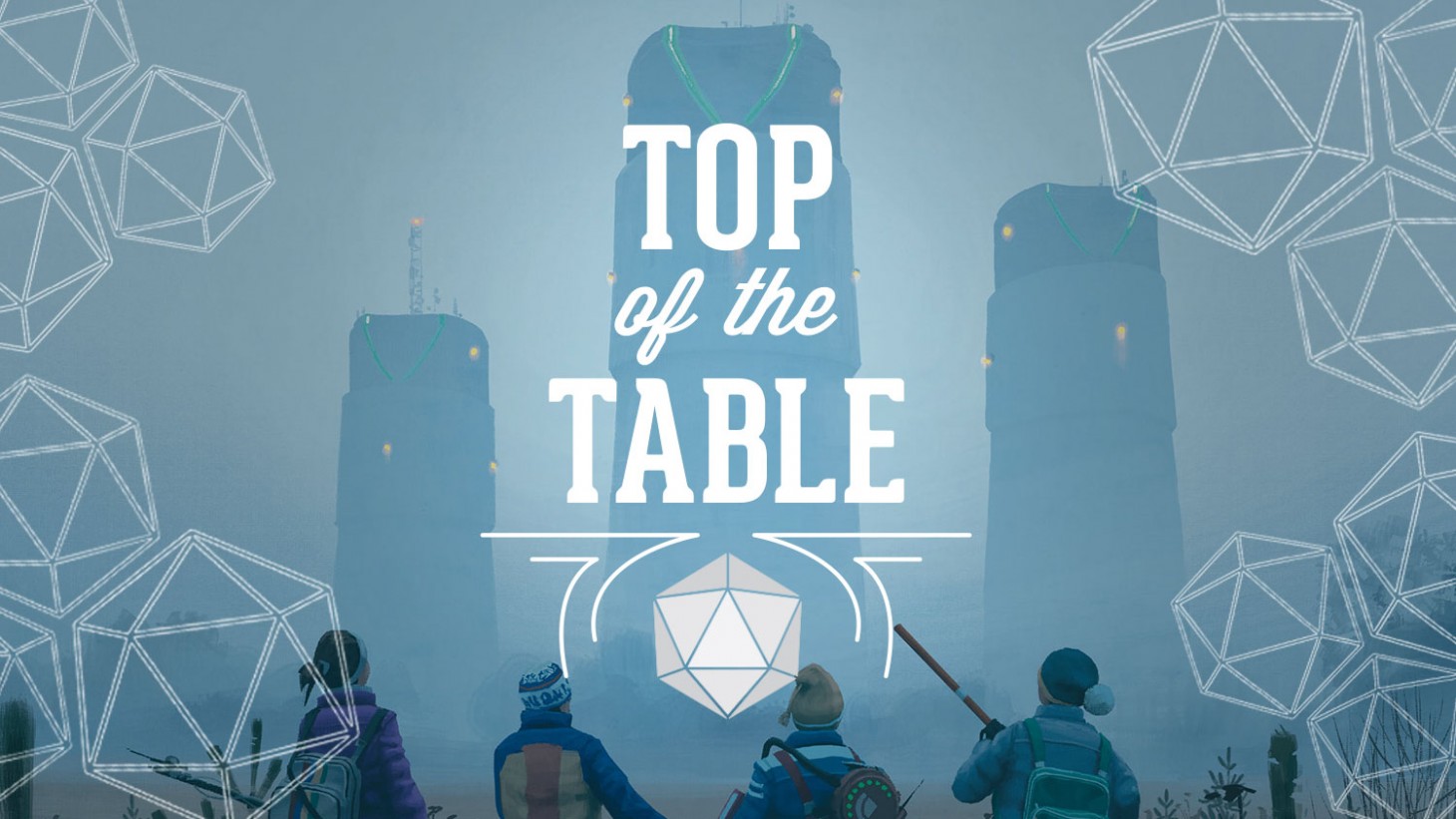 Tales From The Loop Is An Awesome TV Show, And An Equally Great Role-Playing Game

In the current climate of locking down and staying at home, we’re all looking for new ways to keep our minds busy. If you’re a fan of speculative fiction, I feel obliged to offer a recommendation for a new show you may have missed; Tales from the Loop, available on Amazon Prime’s streaming service. This is remarkably rich and emotionally powerful series – and a great way to wile away several hours while you’re at home.

But we’re not here to talk about TV shows. This column is all about the best in the tabletop game scene. It just so happens that Tales from the Loop is also a stellar role-playing game, and a particularly good fit for these times – as its sessions and ruleset can work in remote-play sessions with your friends. 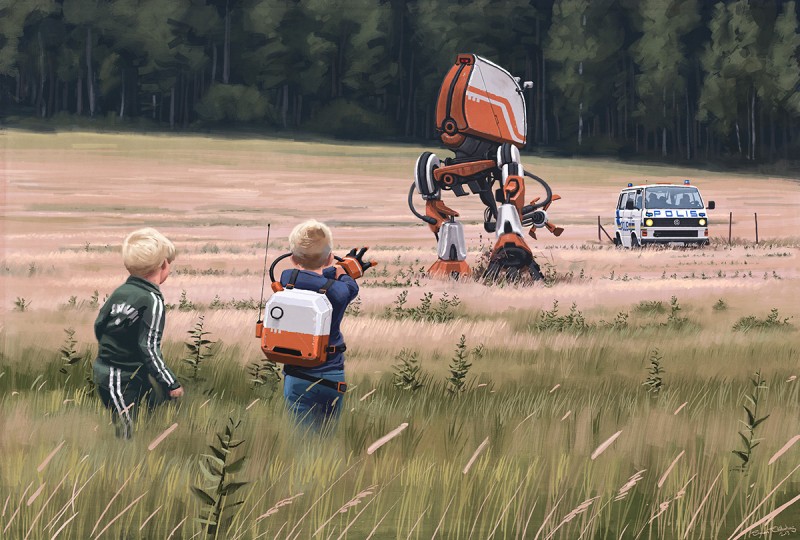 First, a little background: Tales from the Loop found its start as an art book from 2015 by Simon Stålenhag. He crafted a series of stunning images, and some accompanying fiction, that captures much of the wistful nostalgia of a childhood in the 1980s, but interposed with surprising new elements, like monolithic sci-fi towers and rundown giant robots.

The role-playing game took those images and ideas and fleshed them out into a fully realized world, along with a smart rules system that perfectly captures the setting. The role-playing game focuses on playing as kids in this version of the 1980s that never existed, where a particle accelerator in the characters’ hometown has resulted in strange and seemingly supernatural events and experiences. The PCs must contend with normal life drama, like bullies at school or parents who are arguing a lot at home, while facing down strange and otherworldly challenges. In this world, it might not be unusual for dinosaurs to show up in your backyard, or for time to fall out of step in a particular part of a nearby forest.

The resulting game world recalls classic movies like The Goonies or more modern pieces of entertainment like Stranger Things, in which the heroes are normal kids with normal problems who are suddenly thrust into very unusual situations.

The Tales from the Loop role-playing game offers up two options for a main setting, and lets you choose whichever one feels more comfortable and exciting for your gaming group. Whether you choose a chain of islands in Sweden, or a Nevada-area facility in the United States, the tone remains the same – stories of kids who escape the mundane to face off against dangerous and unusual troubles, but they’re often changed forever by the experience.

To realize this idea, the game designers have crafted a rules-light and narrative-heavy system that relies on the players as much as the gamemaster to flesh out the plot and create engaging moments and storytelling. Every player creates a kid, and models them off of familiar types, like Bookworm, Jock, or Rocker. Simple attributes like Body and Mind help separate out the capabilities of each child, further delineated by skills like Sneak, Investigate, or Charm. Create an older kid, and they have higher stats, but younger kids get more luck points, which allow the re-rolling of dice, which is a fun twist.

Challenge resolution is then handled through a simple resolution system using six-sided dice. GMs present the challenge, and the PC rolls as many dice as is warranted by their attribute/skill for the applicable situation. A roll of six on any of the dice counts as a success. While there are some additional wrinkles that add a bit more depth, that simple system governs much of the moment-to-moment encounters. It’s all quite straightforward. 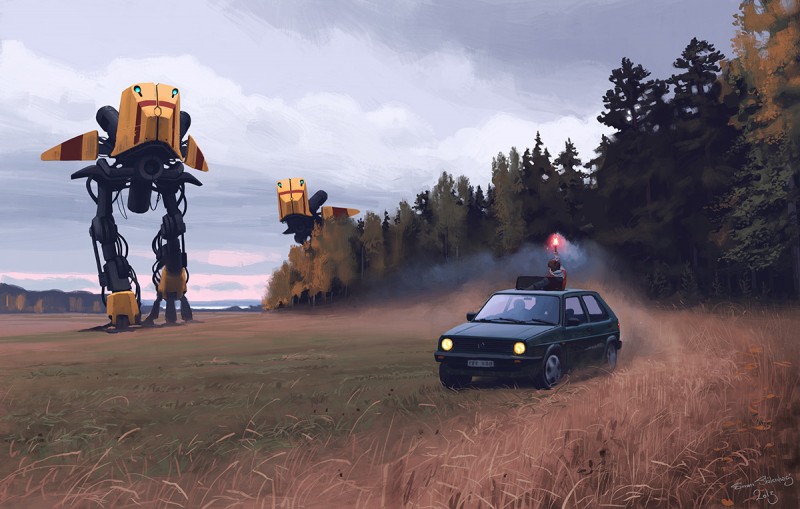 Instead, the real complexity within Tales from the Loop comes from its narrative. Players are encouraged to flesh out their characters with personal drives, problems, and especially relationships to other kids, so your “adventuring party” is really a group of friends or rivals who have a complex string of social obligations, romantic interests, and personal wishes they’re trying to fulfill, even as the story marches forward.

Meanwhile, ongoing narrative play is reliant on both the players and GM to progress the tale, but with a distinct phase structure to how sessions can be played out, all built around the idea of an overriding mystery. Even as the main characters learn about the mystery, solve it, confront the underlying threat, and face the aftermath and its resultant changes to their lives and the world, the stories also regularly return to the challenges of everyday life. So, even if there is a velociraptor terrorizing the neighborhood, your lonely Bookworm still has to deal with the bully at school who always makes fun of him.

For more freeform players, the game also offers a style of play more suited to long-term campaigns, called the mystery landscape, in which players work their way through a sandbox environment filled with strange creatures and situations. 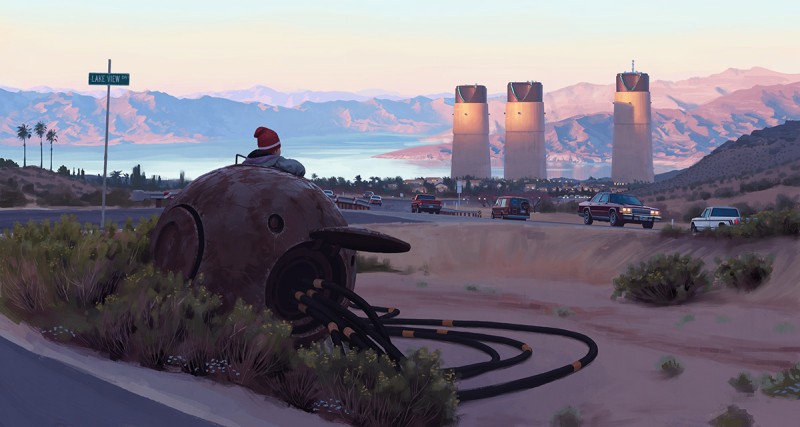 Finally, for GMs who want a more guided experience, especially for their first time out, the book also offers a series of four linked mysteries that are laid out and ready to play. Without spoiling their contents, that campaign offers a great sense of the game’s flavor and flow, and could keep a gaming group busy for a good while.

The Tales from the Loop RPG has been out for a while now, but I’m surfacing the game now for a couple of reasons. First, if you’ve had the good fortune to check out the new show, you may be ready to try crafting your own adventures in a similar style. But it’s also a show that fits especially well into the challenges most of us currently have to interact with one another. With its interest in player-driven narratives, theater-of-the-mind style play (rather than the use of grids and minis), and low threshold for learning the rules, this would be an ideal game to play remotely with friends over a video conference. It’s a wonderful game in its own right, but it could also double as a great way to connect with your friends right now.

If RPG adventures aren’t your thing, there’s no shortage of other great tabletop games you could learn about in our Top of the Table hub, reachable from the banner below. Even if you can’t get together with friends for all the games recommended in that hub, there are plenty of games that you could enjoy with a roommate, partner, or family. In addition, while I always invite you to email me for personalized requests to help find a good game, it’s a commitment I take especially seriously right now. If you have a specific gaming wish unique to your lockdown situation, drop me a line, and I’ll help you find something fun.