Crucible Incorporates Many Flavors Into A Giant Hero Shooter Snack
by Daniel Tack on May 19, 2020 at 08:00 AM
Publisher: Amazon Games
Developer: Relentless Studios
Release: May 21, 2020
Rating: Teen
Platform: PC

The free-to-play Crucible launches tomorrow, one of the first games that we’re seeing release out of Amazon Games. Developed by Relentless Studios, the game is quite the amalgamation of genres, tapping into the battle royale craze, a dash of MOBA-esque teamplay, and blazing fast third-person action.

While it may appear to be a traditional hero shooter on the surface, the mashup of elements and player-vs-environment factors make it feel much different in practice. I suppose the question there is – is that enough? After a few hours experimenting with the different modes, I think there is a place for Crucible even in today’s incredibly saturated shooter environment, but naturally it’s going to be up to players to decide (Look for a full review in the days to come!). 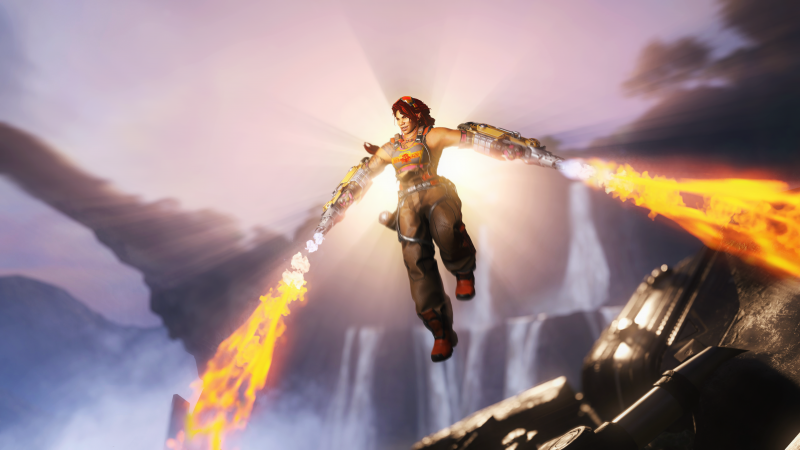 The characters did not inspire me from a thematic or flavor perspective, but their movesets are much more interesting. While I was encouraged to swap characters often to get a sense of the different playstyles, I gravitated toward those I had already tried, wanting to master their movesets and experiment with their level up options. In Crucible, you level up over the course of a match (This is highly based on your team’s ability to successfully navigate both PVE and PVP encounters) and unlock extremely powerful modifications to your skills. These do not persist from match to match, so every battle is new ground that you can take in different directions. My playstyle took me toward aggressive, relentless characters that love being in constant battle.

My first fave that I can’t wait to play more on launch, is Drakahl. A melee-option in a range-based game is unusual, but there’s something great about going full zerker and zipping across the battlefield, fueled by rage, chopping things in half with an axe as they attempt to get away. More than just mindless slashing, Drakahl has a “hook” ability that players will be familiar with from Pudge in Dota 2 or Roadhog in Overwatch – and there’s seriously nothing better than catching one of those sneaky shooty types with your grapple and tearing them apart. Yeah, Drakahl is fun.

The next character I gravitated to was Sazan. She’s a hardcore fully-kitted military maven that comes with an AR, a shotgun, and a deadly throwing knife. The catch is, you have to cycle between them in order to reload each tool, so weaving your options in the thick of combat has a unique flow. The knife does incredible damage, and getting it to land is crazy satisfying, especially as a finisher to a scenario where you empty your rifle in at range during an approach, let loose with the shotgun, and then vanish in the shadows for a split second to nail the perfect knife toss. She’s a ton of fun and the cyclical nature of her combat tools keeps every encounter fresh.

Of course, character loadouts are nothing without an area to play in. The playspace is huge, with myriad events littered throughout – capsules that buff your entire team,  NPC monsters to battle for big chunks of experience, and objectives. Picking what to go after – and when to cut and run or fully engage, should you encounter another team with the same plan – is critical and constantly changing over the course of a game. Maybe it’s a good plan to hang back and try to score some easy creature kills early on and get a level advantage over the enemy … or maybe you try to look for some PVP action right out the gate to put them at a disadvantage for both important mission objectives and critter farming.

Alpha Hunters is the mode for battle royale lovers, a no-respawn game with eight teams of two. It can be devastating to have your partner picked off early, but Relentless has included a curious foible for players that are left on their own. Players that lose their partner can form a temporary truce with other solo-ed players with the click of a button, essentially forming a new team of two. However, it only extends so far, at the end of the game both “teams” won’t be allowed to win despite the new formation, so it will come to blood for those two in the end. Perhaps you hang back a little and let your new partner take point, is what I’m saying.

Harvester Command is similar to a classic domination match, with points accrued by capping and holding. Of the three modes, this one was the least interesting, but I can see it resonating with players looking for the closest thing to Team Deathmatch available.

The show-stealer and “mode of interest” is Heart of the Hives. When it works, two teams clash over giant hive objectives that fight back, with a tense team-based brawl that brings all kinds of synergies and strategies into play. Battles can last long enough that fallen comrades can make it back to battle, and securing the heart is a risky prospect as one player must stop all action to attempt to secure the prize.

Players can be easily dislodged from “capping the heart” so forming a perimeter or getting in the enemy’s face during those important seconds can change the outcome of an entire match. Three hearts equals a team win, and fighting over each heart may not even be part of your team’s strategy. For instance, early on you may opt to cede a heart to the opponent so that you can fan out across the map and gain a ton of other bonuses for your team while the enemies are occupied battling a hive. Of the three modes available, Heart of the Hives is the centerpiece and the one I’d recommend trying before the others, especially if you’re playing with friends.

Crucible has a lot going on, and although it does distinguish itself from other hero shooters, it’s easy to get lost in the shuffle these days with so many competitors. Look for more thoughts on Crucible soon!