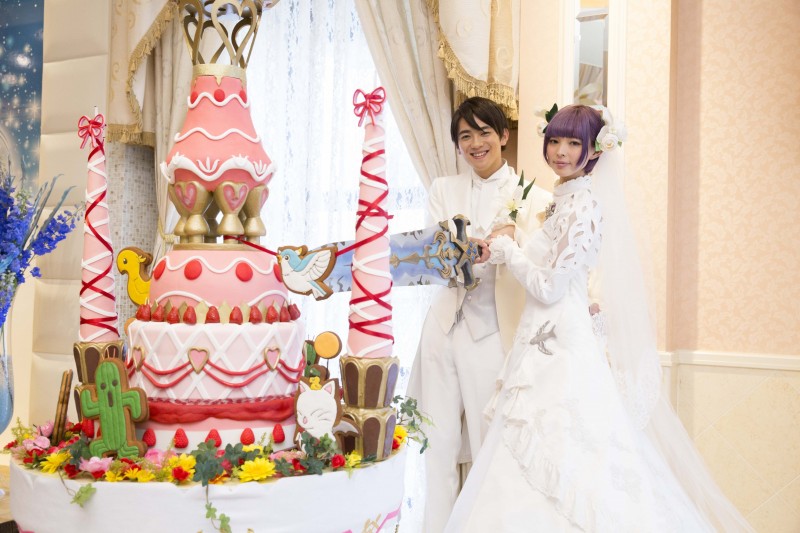 A new service from Square Enix will allow Final Fantasy XIV players in Japan to have a wedding themed after the developer's MMORPG. It's not something you should tread lightly into, but if you have the desire to seal your love in a ceremony that celebrates a video game, Square Enix has you covered.

The Japanese publisher is working with a wedding planning company named Bridal Hearts to give the themed ceremony a go. There is already an in-game event called the Eternal Bond, a faux-wedding within the virtual walls of Final Fantasy XIV for players to swear an everlasting betrothal to each other. The Bridal Hearts-run physical version bases itself on the in-game ceremony, except in an actual place.

A couple took this for a test run on Valentine's Day in Japan, which came with a wedding dress and tuxedo based on the Eternal Bond outfits, replica weapons the players used in the game, a cake with Final Fantasy monsters on it, and more. Final Fantasy XIV director and community figurehead Naoki Yoshida even walked the bride down the aisle, though I imagine that's only for the first wedding and he's not part of the general wedding package.

When it rolls out officially in a couple of weeks, that package will run the equivalent of about $31,000 for 70 guests and a ceremony, so it's not exactly going to come cheap. That said, hey, it's your special day, celebrate it however you want. If that involves moogles, then you get all the moogles you can dream of.