Back in 2016, Night School Studio released the mysterious adventure game Oxenfree. The game's most notable feature is its approach to dialogue, which gives players a variety of options and lets you interrupt other characters when you want. The team's next game is Afterparty, a more comedic adventure featuring two friends stuck in Hell releasing later this year. While at GDC 2019, we spoke with studio director Sean Krankel and game director Adam Hines about the team's approach to dialogue and how they took inspiration from films like Beetlejuice to create their take on the afterlife. Watch the video interview above and let us know what you think in the comments below. 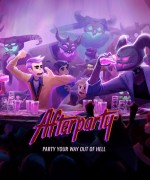