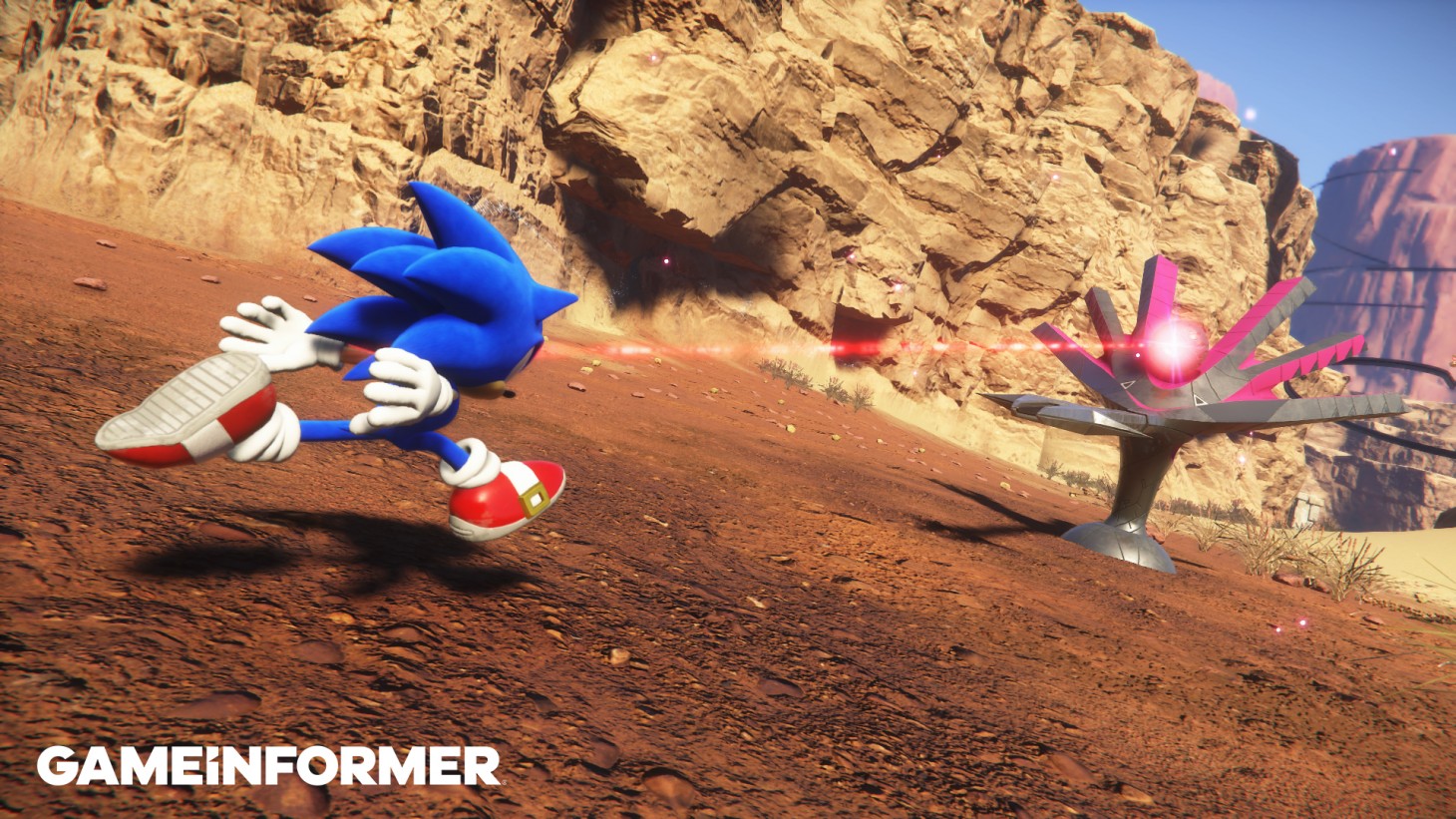 Let me save us all some time. I’m not going to tell you the size of Sonic’s shoes in Sonic Frontiers. I can’t tell you Amy’s relationship status – I don’t even know who she is besides being the cute pink one. And I’m certainly not an expert on Sonic games.

But I can tell you that Sonic Frontiers is the first entry in the series I’ve been looking forward to since the Dreamcast.

For reference, the last time I was excited to play a 3D Sonic game, it was attached to the Dreamcast kiosk at my local target. And to be fair, the orca jumping over the racetrack in the Sonic Adventure demo was a great reason to bug my mom for a new Sega console. 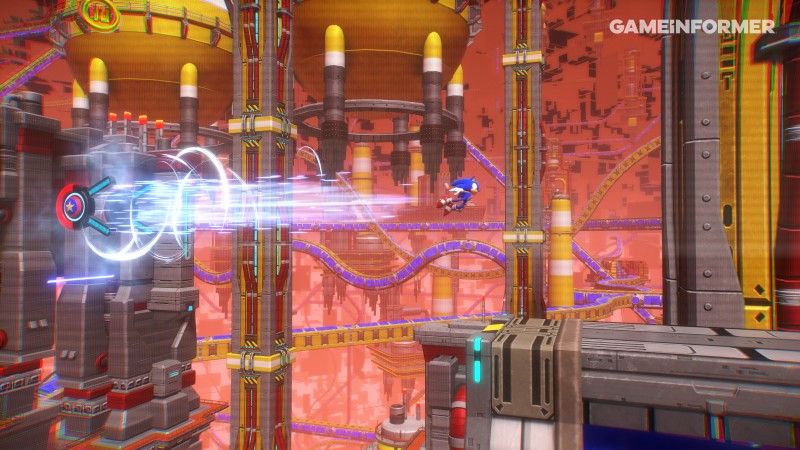 Fast forward 20 years, and I’m sitting in a behind-closed-doors Gamescom appointment to play Sonic Frontiers for the first time. While I’m not a fan of the series, I’ve always liked the concept of the games. I enjoy modern music. I like going fast, and I definitely like the Green Hill Zone.

My hands-on session begins on Ares Island, the second zone. It’s a giant desert with stone ruins and rollercoaster-like tracks scattered across the massive dunes. In other areas, floating platforms jut into the sky. These are the many obstacles populating the open zones of Frontiers, designed to test Sonic’s traversal and combat abilities. Sonic feels pleasing to control. I love using his air dash to chain together traversal combos to reach far-off platforms and the way objects in the foreground blur as I speed by. Importantly, I feel in control most of the time. 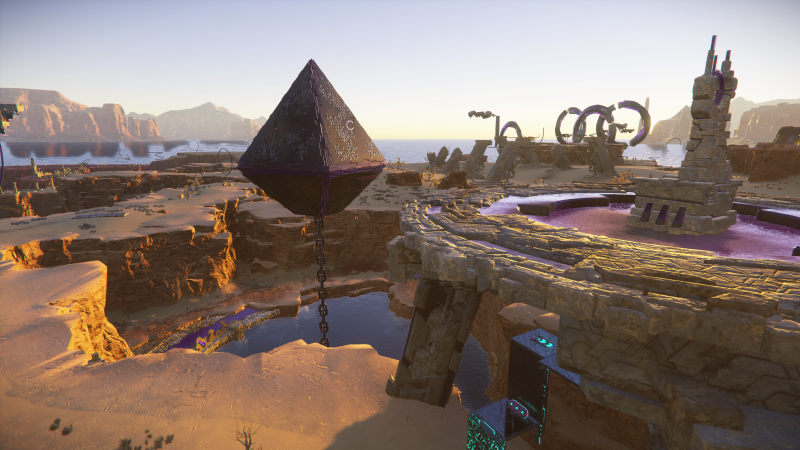 But what makes this Sonic different? Why am I suddenly interested? It has a lot to do with Frontiers’ new approach to levels – open zones. Also, Brian Shea sparked my curiosity with his excellent cover story.

One of my main gripes with past releases is that Sonic’s speed often made it hard to see what’s ahead. I appreciate Frontiers’s more extensive, open-level designs because it’s easy to see obstacles in advance and adequately maneuver around them. Also, there’s always a curiosity on the horizon I want to explore. As I zoom through the desert, I see an installation lurking in the distance. Naturally, I run to it. Suddenly, I realize this isn’t a building or another common challenge – this is an enormous boss I’ve awakened. 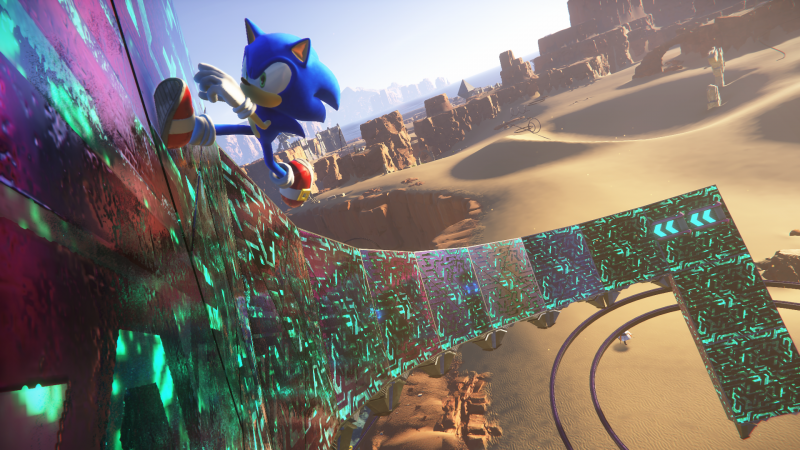 The mechanical being begins to launch giant discs at me. After a quick dodge I jump atop the rings and start grinding on them. A trail of sparks follow my feet as I skate around the ring’s circumference, eventually transforming the rail to pure white. Then I jump to the next, slightly higher ring and repeat the process another time.

Sonic eventually lands on a higher, much larger set of rails protecting the boss’s vulnerable center. But now the giant machine begins firing lasers, turning the path ahead into a death trap. This marks the beginning of an incredibly cool – and tense – experience requiring plenty of jumps, dodges, and rail switches. 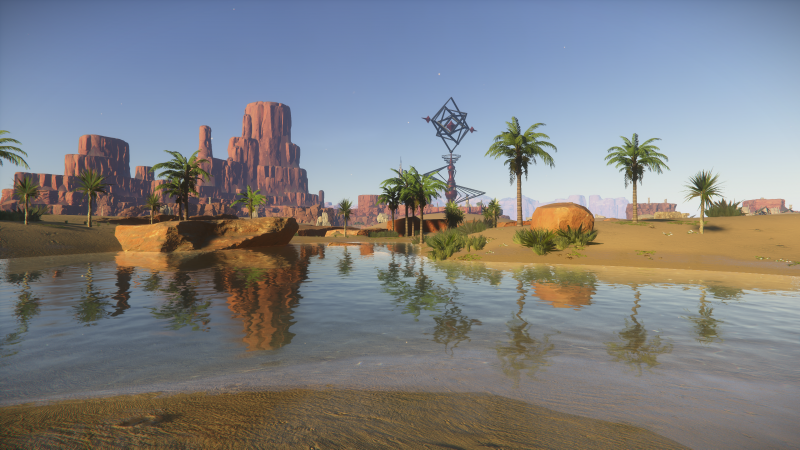 Dance music begins to whirl in my ears as I speed around the perimeter – jumping, dodging, and switching rails as I slowly lower the monolith’s defenses. I finally activate every ring and the defense system crashes, leaving the robot’s core wide open for a flurry of attacks.

As I pummel the boss’ life bar down to zero I begin to have a creeping suspicion that perhaps I’ve made a grave mistake. Maybe Sonic games are good, actually, and I’ve missed out on decades of fun. With little time left in my demo, I sequester my doubts and race off into the sands – there’s a lot to discover in Sonic Frontiers, and I'm just getting started.