The Gunk Steps Back Into The Spotlight With New Gameplay, Coming In December

During today's Xbox Gamescom 2021 stream, The Gunk re-emerged, showing off gameplay and revealing plans for a December launch.

The Gunk comes from the creators of the SteamWorld series. You play as Rani, one half of a space-hauling duo mining the galaxy for whatever resources to survive. However, when she lands on a seemingly barren planet, she gets more than she bargained for with the gunk, which could mean a big payout. However, there's just one problem. The Gunk is also harming the planet, leading her and her partner to question if they should interfere with something they don't understand.

Exploration is a big part of the experience, as you'll make new discoveries about the world by scanning the area and stumble on various biomes, from a rocky canyon region to a dense jungle. Once you eliminate the gunk using Rani's trusty upgradeable prosthetic power-glove, these different biomes retain their beauty. You can watch the trailer above, which showcases the breathtaking sights of the planet when the gunk is gone, and how much darker and bleak things look when it's around.

The Gunk is set to launch this December for Xbox Series X/S, Xbox One, and PC. It is also set to appear on Game Pass on day one.

You can find out more about the game from the developer here. 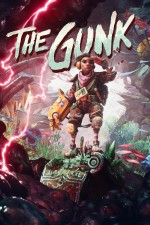