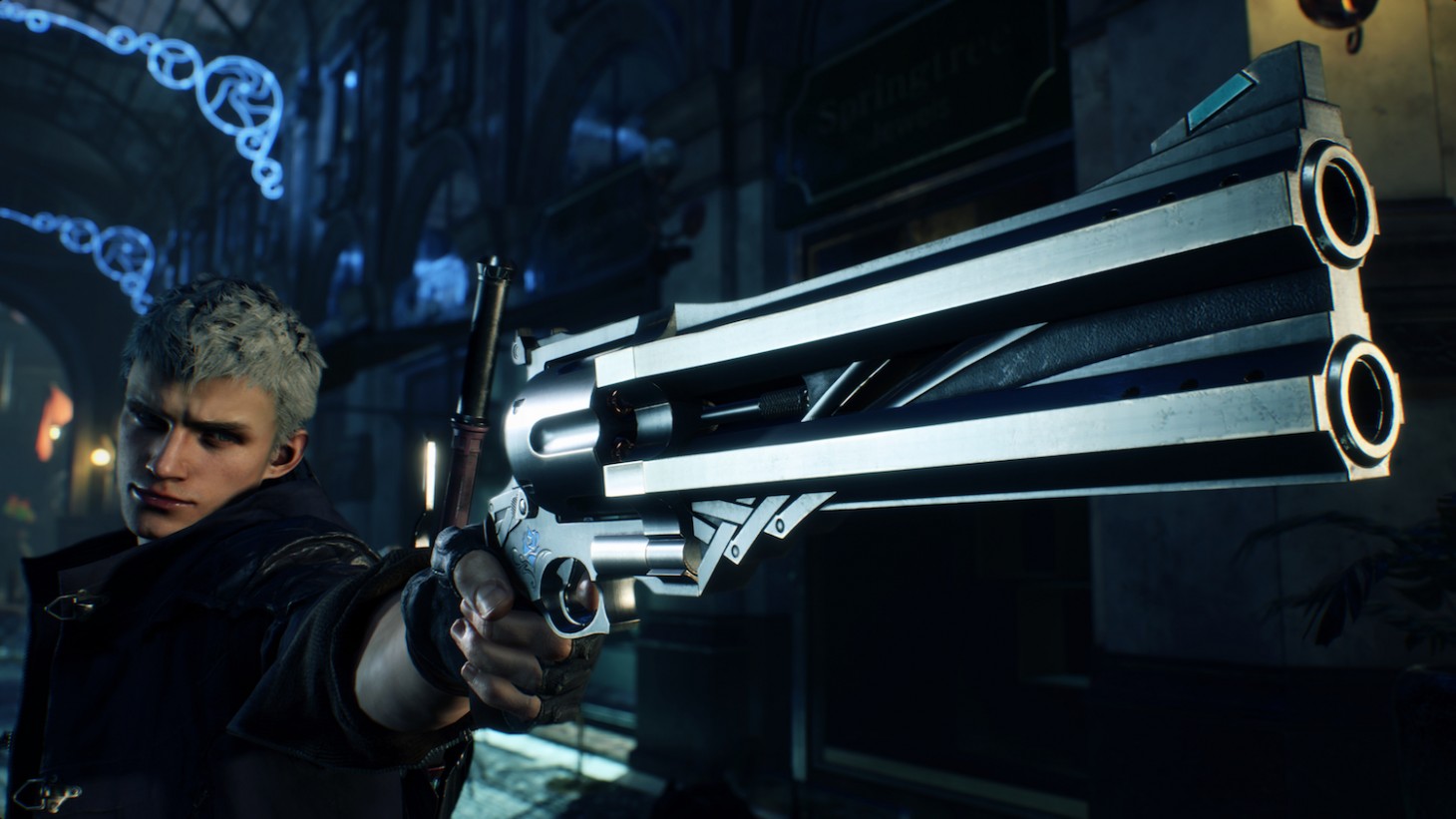 Capcom's Hideaki Itsuno On Ninja Theory, Nico, And The Difference Between Dante And Nero

After finally getting some quality hands-on time with Devil May Cry 5 earlier this week, I had ton of questions about how it played, its characters, and what Capcom had learned in the years between DMC 4 and 5.

Luckily, I was able to sit down with director Director Hideaki Itsuno to have him answer as many questions as I could throw at him in half an hour. We talked about his attachment to various characters from the series, what Capcom learned from Ninja Theory and DmC: Devil May Cry, and more.

With it being a while since the last Devil May Cry game, what is the team’s philosophy behind this game? What did the team want to do?
Like you said it’s been 10 years since DMC 4, and there’s a couple of reasons that I wanted to do a sequel. The first was, I thought, “Okay, there’s actually a couple of new things that I want to do now,” after it had been seven years or so, and I said, ‘All right, I want to see what we can do.’ So that was kind of the first reason to get everything started.

And then he had seen that recently, you don’t see as many action games like this these days. So I also kind of wanted to put out a little challenge and say, “This is what Capcom feels is true, unbridled action, so let’s put that out there and see how people react.”

In between those years, there have been some marquee action games like Bayonetta, and God of War had its own return. What do you feel defines Devil May Cry versus other action games?
There’s kind of two portions to that. First of all, my hope was that when people see Nero, and people see Dante doing really cool stuff on screen, that makes them feel like they’re the ones being cool and stylish. And then also, that players are the ones making those decisions, they’re the ones actually touching the controller and making the inputs. So the hope is that when they do that, based on the information they have based on what the enemies are doing, based on the situations, it feels intuitive, and that it feels like they made the right choice when they made their inputs. And that feels just as good as it looks. So having those two portions, make the player feel good about themselves, is what makes Devil May Cry, Devil May Cry. 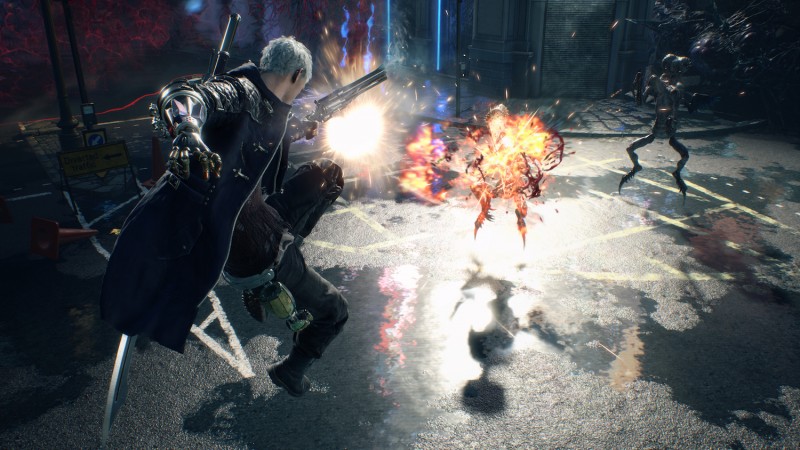 Over the years DMC has had different playable characters like Dante, Nero, and Vergil. Do you feel a particular attachment to Nero since he’s the character you were most involved with versus Dante, who already existed when you came on board?
I did come up with Nero, but we didn’t have Vergil playable in the same form as we now know him as until DMC 3, which I directed, so Vergil is also sort of another character that I basically came up with. But that really has nothing to do with why Nero is really one of the star characters this time around. It really comes down to, In DMC 4 we had a teenage Nero, and we thought, “Well, let’s see what would happen if we saw him in his prime, if we saw him a little older, as an adult.”

And then also the idea of that he has this amazing Devil Bringer. How would the player feel if we ripped that away from him, and instead we give him something new to try out? How would they react to that? Also, there’s certainly things that we wanted to do with Dante as well, which you’ll find a little bit more about at TGS.

What do you see as difference between Nero and Dante from a personality standpoint? Because to a lot of people who don’t know the series, they just kind of look like two guys with white hair who happen to be cocky.
So Nero has always been somebody who has something that he wants to protect, and that’s family. In DMC 4 he had Kyrie, so that’s one of the key aspects of his personality. Dante also has something he wants to protect, but that’s less concrete. His father, Sparda, wanted to protect humans, so Dante feels he wants to respect that decisions that his father’s made, and that’s what drives him.

In the trailer we saw a little bit of Dante, with him wielding the motorcycles. Can you offer details about his gameplay? Will he be similar to his DMC 3 iteration?
Actually I don’t think anyone’s asked this question. We’re going to go more into detail about Dante at TGS, but in terms of whether he’ll more like his DMC 3 or 4 iteration, we’ll have to say more like DMC 3.

So with the different protagonists, is the game structured so that you choose your character before the mission starts, or is each mission tailored to a specific character?We haven’t announced any details on that yet, but what we can say is that there’s going to be several different ways that you can approach them this time. 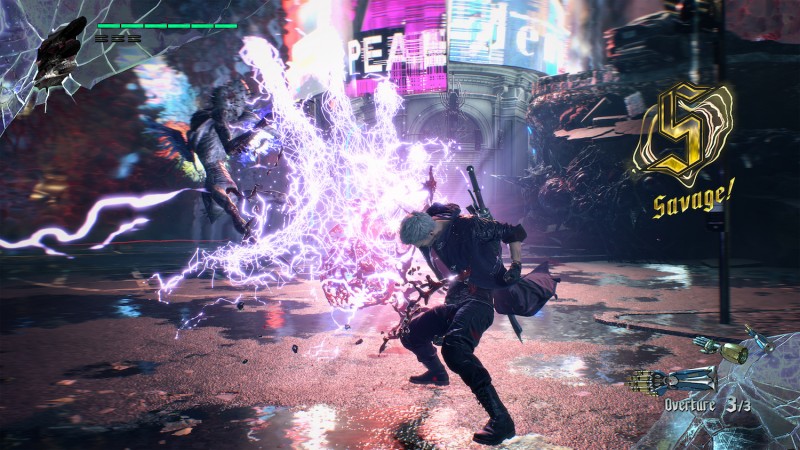 How did you arrive at the decision to give the Devil Breakers an ammo-based system, instead of a meter or something?
It’s actually a really interesting story. It goes back to what I was just saying about taking away the Devil Bringer. It all started from an image that I had in my head of, “How would the players feel if we took away the Devil Bringer?” And then the idea of having Nero in combat, and he’s fighting, and one of these Devil Breakers breaks, and then image of Nero going “Crap,” and shoving his arm down into the holster, pulling out a new one, and it’s still kind of sparkling, doing transformations and stuff, and then, “All right, I’m back in the battle.”

So it all started from that, from the idea that it would be cool if it broke. And then I also had an image in my head of Nico, whenever one of them does break, going, “You’ve got to be more carful with the merchandise!” And from there it naturally proceeded into “How can we approach the game design and offer a new dimension of gameplay with consumable weapons?” And that’s what the Devil Breakers are.

How limited do you see the ammo as being? Do you see it as something players will have carefully manage their use of things, or is it something like, “In this encounter I have X uses of an arm, but I’ll probably get one before the next fight?”
That’s actually a really important part of the game design. It was something we were talking about earlier, about how I’m the kind of guy who never uses elixirs when I play RPGs, so I always have 99 elixirs when I get to the final battle. And we were talking about how yeah, actually we have a lot of people on the team who are like that too. So as we’ve designed the game, we all kind of figured we want people to use the Devil Breakers. And ideally, it gets to the point where people use basically use up their last Devil Breaker in a boss fight in any given mission.

You’ll notice we don’t have a score bonus for having a certain number of Devil Breakers by the end of the stage, because that’s not the intent. The intent is to have people enjoy playing with them. So to that end, we try to design in a way so that for instance, if you have a full amount of Devil Breakers in your inventory, you see one lying on the ground and go, “Well okay, I’m going to use one of them up right now so I can pick up that one up.”

One thing that struck me while I was playing the demo was the way that the camera is positioned. Instead of walking from scene to scene, it’s more standard across scenes, just following the character around. What was the logic behind shifting to that angle?
There’s two parts to this question. One is, I wanted to have it so when you have screens of DMC 3, 4, and 5 all next to each other and you right away go, “This is DMC 5. It’s that one.”

And then the other thing is, because it’s all about playing stylishly, we wanted to bring the camera as close to the action as possible to show you just how stylish it is without it being a detriment to the way it plays. So in trying to balance it as well as humanly possible to make sure we can do both of those things. 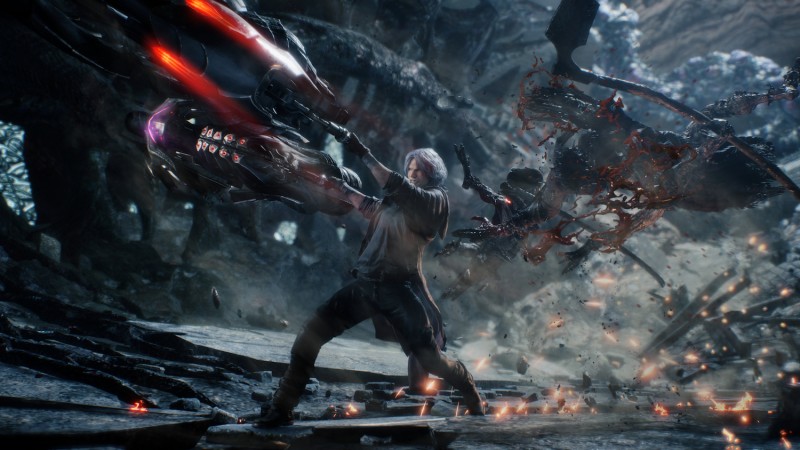 After DMC 4 there was the Ninja Theory game, DmC: Devil May Cry. Did the team behind 5 look at that game for any inspiration?
We learned so much from Ninja Theory and DmC. That was a collaboration between Capcom and Ninja Theory. I went to Cambridge once every couple of months to work those guys. So we learned a lot of from them, and you want to talk about stylish… Ninja Theory, those guys are style incarnate, man. What they did with DmC, that art style, those animations, that is real style, y’know? So we took a lot of what we learned from that.

Even stuff like the kill cams, for instance, we took a lot of that, and having learned that, we tried to implement that in this game as well.

Another thing is, we have a lot of friends who love DmC. For me, DmC is one of my favorite DMC games, if not my favorite. And we wanted to make the game in a way that people who enjoyed that game will enjoy the way it controls just as much as they enjoyed DmC.

Would Capcom ever consider ever working on a sequel to DmC with Ninja Theory, or some other project?
We love those guys. We’d love to be able to work with them again someday. But they’re under the Microsoft umbrella now, right? [laughs] So we’d have to clear that up with them first.

One of the things that’s stood out to me about DMC 5 is Nico. Can you talk about creating her, and what you see as her role within DMC 5?
There’s a lot going on with Nico. We created her as Nero’s partner, and the idea is that she’s a gunsmith, just like her grandmother Nell Goldstein who created Ebony and Ivory. So there’s a lot going on with her in the lore of DMC. But she’s inherited that knack of creating weapons and engineering. She considers herself a weapons artist. She can take these materials she’s got and create true visions of beauty, to create havoc.

Nico feels like she’s the latest in a series of characters, like Trish and Lady, who act as the partner characters to Dante or Nero. With the time distance you had between DMC 4 and 5, did you ever considering creating a playable female character in a starring role
The way we approached it was, “Okay, here’s all the stuff that we want do with the franchise and the story any everything,” so I never considered what sex should this character be, you know? It was just, “Hey, this is the idea.” Either way, Nico is someone we always wanted to be this weapons artist. And then otherwise, we technically haven’t announced any details on this third character yet, so we haven’t announced whether it’s a man or a woman.

Is there any chance we might see either Trish or Lady in DMC 5?
Let me put it this way: If you wait just a little longer, you’ll find out.