Relive Classic Duels From The Show In The Series' Current-Gen Debut
by Jeff Cork on Jun 05, 2015 at 05:49 AM
Publisher: Konami
Developer: Other Ocean Interactive
Release: August 20, 2019
Rating: Everyone 10+
Platform: PlayStation 4, Xbox One, Switch 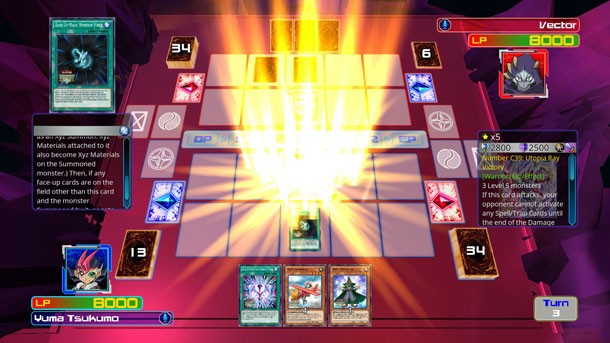 The collectible card game Yu-Gi-Oh has been a video game staple since we still referred to the first PlayStation and Game Boy in the present tense. Now, the dueling game is heading to current-gen systems in a downloadable game called Yu-Gi-Oh: Legacy of the Duelist. In addition to featuring online battles against fellow card battlers, the single-player component lets players revisit some of the animated series' most memorable duels.

The campaign events span the official Yu-Gi-Oh timeline, from the first series through the latest, Yu-Gi-Oh ARC-V. More than 90 characters from the show are featured, and there's a nifty twist on the action. After defeating an opponent, the perspective changes and you have to take on the hero character as the enemy. Konami says there will be hundreds of matches in this mode, as well as a comprehensive tutorial to get new players up to speed.

Players can compete in sealed-pack and draft play against the A.I. or fellow players online. Formats include Battle Pack: Epic Dawn, Battle Pack 2: War of the Giants, and War of the Giants: Round 2. There are more than 6,600 cards to choose from, which is the most featured in the video game series.

Additional decks, avatars, playable characters, and duels will be available after the game launches this summer on PlayStation 4 and Xbox One.