For western fans of the Yakuza series, it's been an almost overwhelming period as of late. Earlier this year, we received Yakuza 0, the prequel to the mainline series, while Yakuza Kiwami, the remake of the first Yakuza title, is scheduled for release in August. On top of both of those titles, Yakuza 6: The Song of Life is set to hit stores in early 2018.

Yakuza 6 is set to be the final entry in the Kazuma Kiryu saga. While Yakuza 0 took place in 1988, this sixth numbered entry puts everyone's favorite street brawler into the modern age, with a 2015 setting. This means that cell phones, social influencers, and even selfies play a role in the story and gameplay.

Since this entry is the first Yakuza title developed exclusively for the PS4, the entry operates untethered from the technical limitations of the PlayStation 3. This means that the world is more alive, character and facial models look substantially better, and the camera feels much more modern.

This also means this entry reacts to the requests from fans over the past few entries by adding several quality-of-life like a streamlined experience system and vastly improved navigation thanks to a new waypoint system in the map.

Yakuza 6: The Song of Life is another exciting entry for the franchise. While I'm concerned about burnout from the series since three titles are hitting the western market in roughly a year's time, there has never been a better time to be a fan of the Yakuza franchise. Kiryu's story is set to conclude on PlayStation 4 in early 2018. 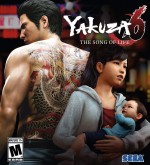