Monolith Soft Goes Big And Aims Higher With Its Open-World RPG
by Kimberley Wallace on Sep 29, 2015 at 10:47 AM
Publisher: Nintendo
Developer: Monolith Soft
Release: December 4, 2015
Rating: Everyone
Platform: Wii U When JRPGs were struggling to evolve last generation, Xenoblade Chronicles came along and showed the genre still had a few tricks up its sleeve. It earned plenty of praise as one of the best role-playing games of last generation, currently holding a 92 score on Metacritic. Monolith Soft proved it could create a compelling world and innovate in the genre, thanks to its creative design and MMO-style combat.

Its successor, Xenoblade Chronicles X, doesn't just switch it up to an extensive sci-fi setting; it expands the scope of everything, building upon the solid foundation set by its predecessor. I recently spent five hours with the game, and I feel like I've barely scratched the surface. If you thought Xenoblade Chronicles was big, you will be surprised just how much Xenoblade Chronicles X dwarfs it - and that's not even mentioning the extensive customization or Skells (mechs) that further enhance the experience. Not much has been revealed about X's plot, except that a huge battle between two alien species above Earth has destroyed our home planet. Humans evacuated and have spent the past two years roaming space in emergency ships. However, the real story doesn't begin until your main character (you can customize your gender and appearance), crash lands on the planet of Mira. Without much memory of who you are, you're greeted by a woman named Elma, who shows you the ropes of life on this -mysterious continent called Primordia. A rocky grasslands region, Primordia is the first of five different continents that make up Mira.

Elma explains that when their ship, the White Whale, crashed here two months ago, the surviving humans began slowly building New Los Angeles. A good portion of Xenoblade Chronicles' plotline focuses on rebuilding society and finding survivors to revive humanity, but what's most intriguing are the mysteries Mira holds. The planet is teeming with dangers beyond enormous creatures; in fact, as you explore, you run into various alien species. Some will be hostile; others will join your base if you help them out. Can everyone coexist? This already seems more exciting than Xenoblade Chronicles' plot. We always question if there's life on other planets and if it would be friendly or not, and I like how X explores this concept.

Also noticeable right out of the gate is that X's dialogue has much more personality than Xenoblade Chronicles. Your dialogue choices elicit different responses depending on what you pick. These won't alter the storyline, but instead color the conversations you have with other characters. At one point, I try to take credit for keeping the area safe, and Elma quickly calls me on it. Later, we meet our second party member, Lin Lee, a 15-year-old mechanic. She's extremely gifted, but every so often says something that reminds you she's just 15, like when she talks about her Skell fan-fiction. The humor isn't overdone and is clever when it's used. Counting Elma and Lin Lee, a total of 16 characters can be recruited for your party. This includes all the DLC characters released in Japan; Nintendo is including them at no cost in the North American release. Becoming A Member Of B.L.A.D.E.

The opening moments serve to ease you into the mechanics and all the different things you can do. It's a lot of information to take in, and even after spending five hours with the game, I was still learning the ropes. New Los Angeles, with its four districts, serves as your hub. After a few basic missions, you join up with B.L.A.D.E. (Builders of a Legacy After the Destruction of Earth). This group was created to maintain the burgeoning New Los Angeles and to explore for supplies and threats. Once you join, you get to pick from one of eight different classes, from mediators who help the townspeople to reclaimers who search for wreckage from the White Whale. Every class comes with its own perks, and just because you pick a class doesn't mean you can't do activities associated with others; this just gives you an area to focus on for potential upgrades for your character.  Throughout the game, you earn division points for defeating enemies, completing missions, and opening chests. Bonus division points are awarded if you do missions in your specialization. Division points allow you to level up your B.L.A.D.E. rank, which grants you additional rewards and higher level probes.

B.L.A.D.E. has its own mission board, where you can retrieve different job requests. From the get-go, the board is overflowing with a variety of missions, on top of people handing you tasks. More than 400 quests exist, including story missions that advance the plot, affinity missions that improve your relationship with characters, and normal side quests such as rescuing characters or retrieving items. The narrative has a total of 12 chapters, but you can't advance unless you meet certain requirements. For instance, you might need to reach a specific affinity level with a character or explore 15 percent of the continent to proceed.

Click on the next page to learn more about the gameplay and online components... A variety of activities are available in Xenoblade X's vast open world, and they fit seamlessly into the overall exploration, such as placing probes (which also opens fast travel to those locations) and helping characters in peril. Who knows? Maybe you'll run into members of a new species and convince them to join up with you. At one point, I recruited a species and I was given access to brand-new weaponry.

One side quest tasked me with obtaining a red orb that was inconveniently placed in front of two level 35 tyrants. I was level five at the time, so there was no way I could afford to draw their attention my way, forcing me to slowly walk by them and figure out a way to stay out of their sight.

Various chests and places to mine resources are uncovered as you explore. You must tap "A" repeatedly to open these, but some chests remain locked until you level up this ability. Returning from Xenoblade are orbs littered on the field, which contain additional items. The jump button allows you to get up on higher ledges, but if you use it while running you can do a super jump that lets you float through the air. This quickly became my favorite way to explore.

All sorts of creatures inhabit the land, be they aggressive, neutral, or friendly. Paying attention to the color above them is essential; if it's red, you need to keep your awareness up. The joy of the game really stems from exploration; majestic, dinosaur-like creatures are all around. Other continents sport completely different looks. For instance, one is a jungle and contains alligators that leap out from the water to attack you. Another is a fire island that rains fire and allows you to explore inside volcanoes.

Each locale is filled with nooks and crannies, but quests leave a marker for you to track down. Better yet, after a few missions, you unlock the "follow ball." All you need to do is hold "R" and press "X," and a navigational ball leads you to your destination. This comes in handy when there are mountains or other obstacles in your way, showing you a fast path to get around them. Xenoblade Chronicles X's battle system doesn't change significantly from its predecessor. You activate skills on a cooldown meter while your character automatically uses regular attacks, akin to an MMORPG. But the battles are noticeably faster and smoother than before, something Monolith executive director Tetsuya Takahashi said was born out of this game having longer conflicts. "[We] wanted the pace of the combat to be faster, so those don't last too long," he says.

I took delight in finding the right grooves of attacks to create deadly combos. Positioning still matters greatly, and every art has a positioning bonus. For instance, an art bonus can provide a damage increase for a side attack, or a specific art may add a 50-percent damage bonus if the enemy is toppled. You can combine these for devastating combos.

Additionally, I enjoyed being able to alternate between melee and ranged attacks. My character had a deadly sword I could use up close, but if I wanted to play it safer, I could always swap to my gun and snipe from afar. I actually preferred the guns to the sword for this reason - and let's be honest, lasers are just cooler. The A.I. is also much better this time around; my allies rarely died and knew when to fall back and heal.

Arts can be customized to fit your playstyle. For the start of the game, you are a drifter that allows you to obtain a variety of different arts. Once you reach level 10, you have different branches you can break off into: enforcer, striker, and guerrilla. Enforcers support from afar, gaining access to a slew of ranged arts. Guerillas are like tanks who want to rack up damage; their arts are focused on damage buffs, evasion, and improved accuracy. Strikers go in guns blazing and are a mix of offensive and defensive skills, providing HP and melee power bonuses. The striker is the recommended class for beginners, while the enforcer is for more experienced players. Those expecting to hop right into a mech might be disappointed; you don't get your Skell license until chapter six, halfway through the game. You also won't receive your first Skell until level 20, and you can't pilot it until researching the flight pack after chapter nine. "The main reason we didn't want players to have the Skell from the beginning of the game is that we wanted them to have the opportunity to fully explore the world on foot first," Takahashi says. "The world starts to feel quite a bit different once you have the Skell, especially once you experience different layers of the world vertically."

Nintendo skipped me ahead so I could test one out. Skells definitely make exploration a different beast; you can fly to floating islands and some structures have hidden caves that can only be accessed via flight. Skells also make journeying between continents much easier - I didn't even care about fast travel once I got mine.

Stepping into X is overwhelming for its sheer vastness and scope alone, but that's what makes it so thrilling. The game feels endless, but my desire to keep on playing and discovering new things never left me. My early look has me confident that this game will inspire massive playthroughs just like its predecessor, but X feels like it has even more to offer in terms of variety and size. Plus, who isn't excited to see Takahashi and company get back to their sci-fi roots à la Xenogears and Xenosaga? 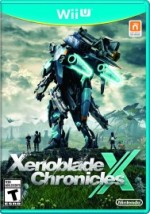