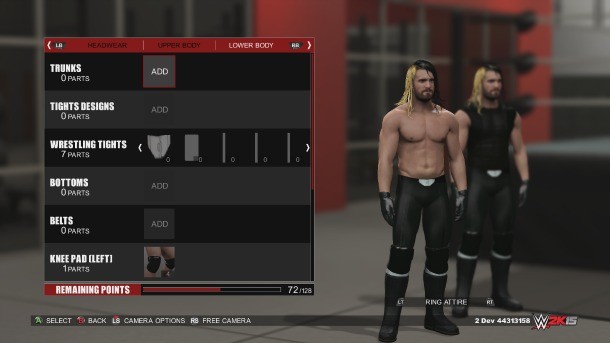 Last week, we shared with you the first video for WWE 2K15 Superstar Suite. Today, we know more about the full menu of options that will be available to players on Xbox One and PlayStation 4.

Visual Concepts art director Lynell Jinks says that some long-time features won't be making their way to the new-gen versions of the game, though. The options to create arenas, Divas, championships, and narratives through the story designer will not make the cut for WWE 2K15.

"This decision was extremely difficult, but a necessary one, in order to deliver a more focused and polished game," Jinks writes. "The primary reason we did not announce these changes earlier is due to the team working until the last minute to retain as many features as possible."

The team is adding a fan-requested toolset in the form of the Superstar Studio. This will allow players to update wrestler entrance and in-ring attire to keep them current with movements in the WWE.

While players can upload anything they want, 2K Sports says it has systems in place to flag inappropriate content. The process for uploading an image to the game was also detailed:

There is a memory cap for each wrestler. Players will be allotted 128 points (64 layers). These points are shared between entrance and in-ring attire.

For more on WWE 2K15, check out our hands-on preview from Gamescom. The title is out on November 18 for Xbox One and PlayStation 4.