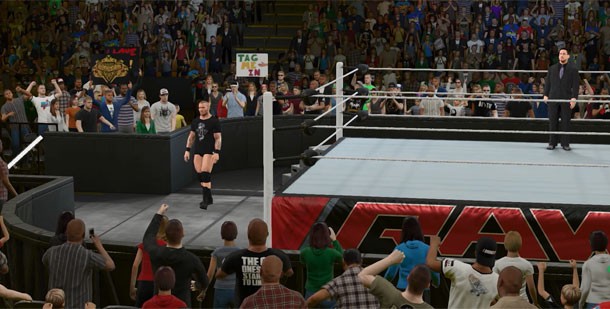 WWE 2K15 is the first game in the series to make it to new-gen consoles, and the developers at Visual Concepts and Yukes are using this milestone to start fresh in a number of ways. A new video shows a behind-the-curtain look at how the team is working with the personalities of the WWE to deliver the most faithful interpretation yet.

The clip shows team members from Visual Concepts outlining their goals with WWE 2K15. Essentially, they felt it was time to bring a new generation of wrestling to consoles. That includes using sophisticated new facial-scanning technology, and you can see Randy Orton and Hulk Hogan mugging it up during their sessions. The devs also took a cue from 2K Sports' own NBA games, and decided that it's time for the WWE games to try and faithfully emulate the broadcast presentation from the shows. Most important is the in-the-ring action. You can see some of the mo-cap sessions in the clip – and they're a little more involved than watching a guy peek behind a fake rock.

For our thoughts on how it's actually all coming together, take a look at our hands-on impressions. WWE 2K 15 is set for an October 28 release on the PlayStation 4, Xbox One, PS3, and Xbox 360.