DotEmu is bringing back a pretty deep cut, with the remastered version of the Sega Master System game Wonder Boy III: The Dragon's Trap. The game, now called Wonder Boy: The Dragon's Trap, features an impressive new hand-drawn art style, but developer Lizardcube is going the extra mile for retro fans. A new trailer shows just how far they're willing to go.

You can swap between the new visuals and the original 8-bit style at the press of a button. The screens above and at bottom show the same level in both formats. Take a look at the clip below for more examples.

Best of all (at least, if you still have your copy of the original), you'll be able to put in the passwords you wrote down when the game first launched. You see, back in the day, games didn't necessarily have the ability to save your progress. Instead, you'd have to go to a special screen and write down a series of seemingly random characters. When you put them back in later, you'd be right back where you – wait, where are you going?

Wonder Boy: The Dragon's Trap is coming to PlayStation 4, Xbox One, and Nintendo Switch this spring. 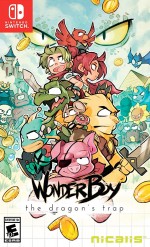