With Watch Dogs 2, Ubisoft is hoping to address the issues of its predecessor, such as introducing better driving and deeper hacking systems. I tried the new entry, and was able to explore the expansive open world of San Francisco and find out how cooperative play can change how you approach missions.

This time around, you take the role of the new protagonist Marcus Holloway. He's a brilliant young hacker who became a victim of the ctOS 2.0 system, which unjustly branded him as a criminal when he was younger. This drove him to join DedSec, a hacker faction focused on exposing corrupted establishments such as Blume, the creators of the ctOS, as well as crooked political and criminal organizations.

During the beginning of the demo, the first thing I'm introduced to is how I can remotely control any car in the general vicinity. Hacking can be accomplished with the touch of a button, or by holding it down to see four different commands. For example, when remotely controlling a vehicle, I can accelerate, control, or steer the car in any direction, which startles nearby NPCs (it's pretty entertaining).

Once I enter a busier part of town, it becomes evident that every NPC is hackable. I can listen to texts, phone calls, and even edit someone's profile to turn them into a wanted criminal. Watch Dogs 2 is filled with plenty of shops, and these can be used as fast travel hubs to quickly traverse the city. In one shop, I customize Marcus' clothing from head to toe, giving him a new hat, shoes, and a skeleton-themed sweatshirt.

Next, I search for a mission to begin. To do so, I open up network hacking, which transforms my vision into black-and-white, highlighting key destinations in color. Missions are nicknamed DedSec operations, and these can be found through your DedSec App on your phone, or by exploring the world and using network hacking to locate quests. With Marcus' flying drone and network hacking as my guide, I access a higher vantage point on a tower to hack a junction box. From here, I retrieve digital information that leads me on a quest to infiltrate a warehouse. To get there, I hop into a flashy red sports car near me, and what's instantly noticeable is the improved driving mechanics. Controlling the vehicle is smoother, and it skids less than the car from the previous entry. The world is also much more responsive and vibrant. For example, as I approached my destination, a random NPC dragged me out of the car and hijacked it.

Arriving at the warehouse, I skillfully climb up onto a rooftop, though I soon realize the area is patrolled by guards. Luckily, I have a small RC car that can weave through the handful of guards unseen to unlock a door further down, which I soon enter to retrieve the data necessary to complete the mission.

The second mission I played utilized co-op. Watch Dogs 2 incorporates a "seamless" multiplayer, where you cross paths with other players who appear as fellow DedSec hackers. To begin this DedSec operation, the other player and I form a team. We use voice chat to coordinate our moves and use an emote system for basic communication, such as waving to one another. For this mission, we head to a gang's headquarters where mobsters are about to exchange a hard drive that we need to steal. With several hacking tools at my disposal, such as scoping out the area with my drone, and throwing grenade-like zappers that electrocute my foes, my teammate and I progressively make our way towards our targets who have the hard drives in their possession. My teammate is able to steal the first hard drive, but in the meantime I'm spotted. A gunfight ensues, so I equip my taser gun which I use non-lethally, and I knock out other enemies in close proximity with my melee weapon, which is a cue ball attached to string that I swing aggressively. Finally, the end is in sight: I grab the final hard drive and both my teammate and I escape the area.

With a wider range of hacks at your disposal, better driving mechanics, and mechanical contraptions like drones to creatively use to your advantage, Watch Dogs 2 is showing potential. Ubisoft's sophomore installment of the franchise will release November 15 on PlayStation 4, Xbox One, and PC. 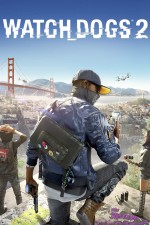