With Tropico 6, Limbic Entertainment is bringing back fan favorite features and combining them with their own personal touches in hopes of creating the most fully featured entry yet. As with the previous entry, you play through four eras (Colonial, World War, Cold War, and Modern) in this city-builder with a totalitarian twist. I checked out an early build of Tropico 6 and came away impressed by what the developer is doing with the title.

In Tropico 6, you once again assume the role of El Presidente as you build your fledgling nation up. The goal of the game is to stay in power long enough to complete 1 of 15 single-player missions or to see your nation become a powerhouse.

You can accomplish this through either acting as a benevolent patron or a ruthless dictator. Do you hold elections? Do you only open them up to the wealthy? Do you try and attract tourists? Do you invest in the weapons industry? Do you test nuclear weapons? These factors all affect how your citizens view you and how much they'll tolerate your reign.

This time around, you control an entire archipelago rather than just one island. The grouping of islands I saw featured one that was rich in agriculture, while one was host to a massive volcano, and the other was a beautiful beachy island. Each area varies with resources, with accessible overlays showing where you can find resources like oil, fish, and iron. One island was rich in coal, so we built a coal mine and a port so that boats could transport it to the other islands.

At the mid-way point of my demo, a message pops up that my citizens are demanding an election. I can choose to appease them or test their patience. We decide to give them what they want and hold an election. Prior to the vote, you can give your speech with promises and even point the blame at other variables for your shortcomings. Once you reach the election, you can opt to let the votes speak for themselves or you can try and manipulate the vote after the fact.

A new aspect of Tropico allows you to perform raids. Each era requires you to build a specific landmark before you can complete raids. Raids are missions you send to neighboring countries. You can perform tasks like espionage, manipulate the stock market, or intimidate your neighbors. Instead, we decided to steal the Statue of Liberty. We sent special ops off into a plane and they went off on their mission.

After some time passes, a dialogue box pops up saying my team needs more support. I can send them oil, give them more time, or do nothing. My choice affects their chances for success. The mission ends a complete success and four planes fly in shortly after hauling the Statue of Liberty. It was a goofy moment that sticks out in my mind as the exact kind of tongue-in-cheek moments that sets this apart from the other city-builder titles.

I've never been a massive Tropico player, but this sixth entry looks promising. I'll be keeping my eye on Tropico's development as we get closer to its 2018 release. 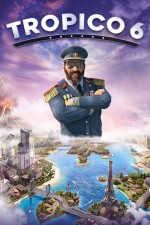