The Live Action Launch Trailer Comes From The Minds Behind Robot Chicken
by Alissa McAloon on Aug 17, 2015 at 09:56 AM The launch trailer for Toy Soldiers: War Chest captures the spirit of the game, despite not showing much actual gameplay. In the trailer below, a worker confined to a cubicle turns his desk into an open battleground where action figure superstars like Cobra Commander, He-Man, and Ezio Auditore engage in deadly, office warfare.

Similar to the trailer, the actual game puts players in charge of armies led by some of their favorite childhood action figures. The base game includes generic armies modeled after science fiction, civil war, supernatural, and cutesy childhood toys. The Hall of Fame edition introduces familiar faces from G.I. Joe, Assassin's Creed, and He-Man: Masters of the Universe into the mix. Players take control of one of these armies and must upgrade and customize it to gain the competitive edge in Toy Soldiers' hybrid action-strategy matches. Check out the armies in action here.

Toy Soldiers: War Chest is out now for PlayStation 4, Xbox One, and PC. The base game retails for $14.99 while the Hall of Fame edition, complete with all eight armies, costs $29.99. 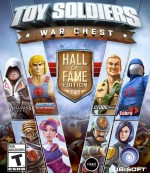