Developer Runic Games has finally pulled back a little more of the curtain around its highly anticipated action/RPG sequel. The official site has a peek at some of the races in the game. Does this mean there might be a tiny bit of story to Torchlight II?

Everything in Torchlight revolves around Ember, a kind of crystallized magic that serves as a power source for anything imaginable. The old Estherian empire of old was built on its wondrous abilities, but collapsed as the dangers of the unstable mineral became clear. The races of Torchlight II each have a unique relationship to Ember.

The Ezrohir (pictured) are a race of souls bound permanently to suits of armor. Though they are quasi-immortal, the Ezrohir require ever-more Ember to power their suits.

The Sturmbeornen are a faction of primitive bear-men who have recently pushed into the civilized world in force. What is driving them to try to conquer the last city of the Estherians?

Dwarves in Torchlight 2 are extinct, but their corrupted dead and unrivaled machines yet defend the ancient dwarven mines and cities from invaders.

Varkolyn were a nuisance in the first game, and return to annoy players in the sequel. These weak, barbaric troglodytes lack the intellectual capacity and societal graces to create any lasting civilization. 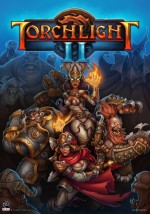