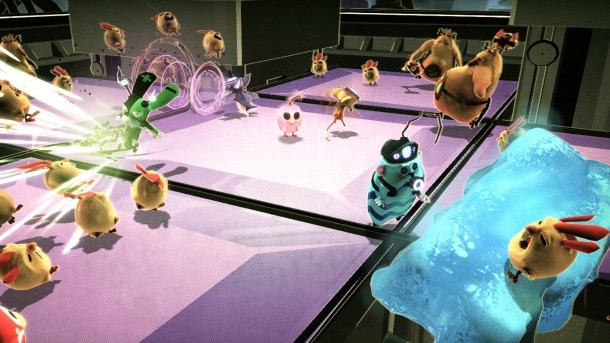 Spearhead Games’ upcoming indie title Tiny Brains is a fun take on the cooperative puzzle-platformer. Players control one of four rodents in a lab experiment, where each level is narrated by a mad scientist with a Russian accent (naturally). In short: Solve every puzzle, undermine the mad scientist, and don’t do it alone.

Players easily fall into this role. Much like Portal, most of the challenges are neatly presented to players one after the other, and doing the opposite of what the narrator wants is always the most rewarding. In one of the most memorable moments of the preview, we enter a new level and meet a character named Pinky. When the narrator expresses his interest in killing Pinky, we jump into action.

Each of the playable rodents has a super power. The bat can force push, the rabbit has a vortex ability, the mouse can swap places with faraway objects, and the hamster creates blocks of ice. If you were thinking one of them sticks out, you’re right – the hamster is pretty lame. Make a younger sibling play that one.

Pinky stands in the center of the room while a horde of angry chickens charge. What follows is a combination of confused shouting and exhilaration. Up to this point, we had only used our powers to manipulate blocks and solve rudimentary puzzles. With no way to simply attack with our characters, we quickly realize we can use our powers to dispatch Pinky’s enemies. The rabbit’s vortex pulls enemies close, and a force push from the bat sends them into environmental hazards. The mouse leaps over pits of fire and swaps places with the larger enemies, letting them fall to their deaths – which is immensely satisfying.

Puzzle games shine when they enact a sense of urgency, and prepare you enough that you just barely succeed. Whether Tiny Brains can deliver on this front remains to be seen. Solving puzzles comes down to figuring out which order players use their abilities. There is no penalty to dying, so we often threw ourselves to our deaths while we waited for scripted events to finish. In the end, what makes Tiny Brains fun is the creative chaos of the four-player cooperative experience. Puzzle too simple? Intentionally knock the ground out from under your friends. Have a solution to a puzzle? Yell louder. 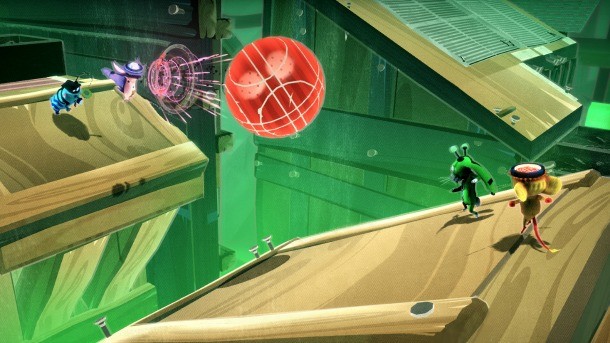 Once you’ve had your fill of the story-based puzzles, you can check out the variety of other modes. Challenge mode pits players against an experiment that gets increasingly difficult. Tiny Soccer is a 2v2 competitive mode (similar to Rayman Legends’ Kung Foot). Single-player is also an option, but it doesn’t match up with the cooperative gameplay. Players can swap between powers easily, but each puzzle is lengthier as you’re forced to retrace your steps multiple times before reaching a solution.

Tiny Brains would have joined the PlayStation 4 launch lineup this Friday. However, Spearhead Games delayed the puzzler’s launch until November 26, citing online issues as the problem. If you weren’t planning to play it locally with some friends, this is absolutely the right call. Your friends will make the Tiny Brains experience. 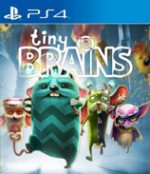