Update: The latest The Walking Dead trailer from Activision was actually a fan-made trailer using b-roll footage of the game.

One Of Swords caught onto the fact that the recent The Walking Dead trailer was actually a fan-made trailer from Up At Noon, and not an official trailer for the upcoming AMC game. However, apparently the trailer was so convincing that many Activision employees thought it was legit.

Original Post: The Walking Dead is at the top of it's game right now, but Activision's upcoming FPS based on the AMC television show doesn't look like it will stand up to the franchise's usual level of quality.

Survival Instinct is a first-person shooter developed by Terminal Reality, which acts as a prequel to the show, following the Dixon brothers as they fight their way through hordes of zombies on their way to Atlanta. See how the game is coming along in the following gameplay video. 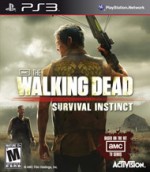